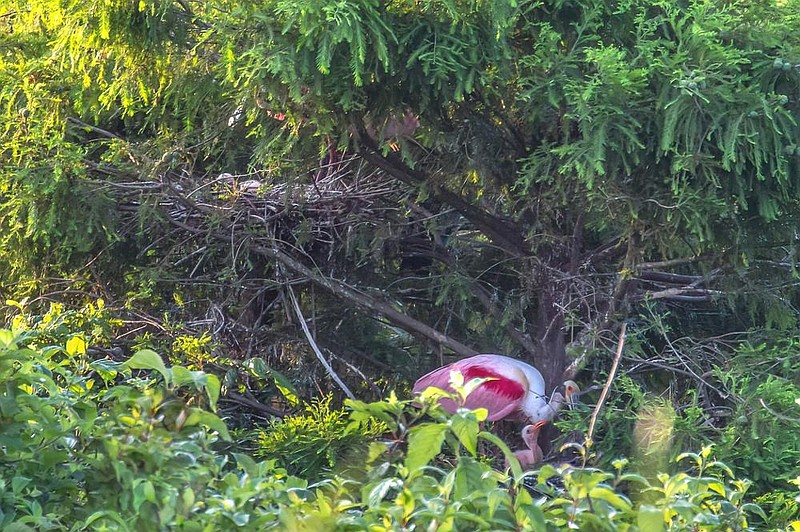 A roseate spoonbill tends to a young bird near a nest in a wetland area in Ashley County. The birds are typically found in coastal areas of Texas, Florida and Mexico. More photos at arkansasonline.com/621spoonbill/. (Photo submitted by Jami Linder)

Jami Linder visited a wetland in May to photograph birds near Portland, an Ashley County town of about 400 people in southeast Arkansas.

After her trip to the wetland, she shared photos on Facebook of a unique bird that from a distance could be mistaken for a flamingo. Among the water birds that Linder captured photos of that day was a roseate spoonbill: a long-legged, mostly pink bird with an elegant white neck, a splash of red on its wings and a long bill that tapers before widening into a round spoon shape at the end.

What Linder didn't know at the time was that she had inadvertently documented a historic bird sighting for the state of Arkansas.

Linder's sighting, with subsequent confirmation by an Arkansas Game and Fish Commission biologist who visited the Ashley County wetland, is believed to be the first record of roseate spoonbills laying eggs and rearing their young in Arkansas.

"It is exciting, you know?" Linder said Thursday in an interview, adding that "the first is forever."

Someone on Facebook commented on one of Linder's photos to say the birds look "almost prehistoric," she said.

The observation rings true. With the striking rounded bill and red-rimmed eyes, the roseate spoonbill seems like it flapped out of a prehistoric swamp, its evolutionary stage stuck somewhere between reptile and bird, before being swiped with a psychedelic pink paintbrush.

Spoonbills are typically found in coastal areas of Texas, Florida and Mexico, according to the Audubon Society. They feed on small fish, insects, crayfish and shrimp by wading in shallow water, dipping their bills and feeling around for their quarry.

Roseate spoonbills were once more common in the United States, before extensive hunting for their pink feathers -- which were desired for the hat industry -- drove them nearly to extinction in the wild by the early 20th century, according to the Game and Fish Commission.

Although they can be seen in southern Arkansas during seasonal visits in summer and fall, the sight of roseate spoonbills nesting in the state is evidently so rare that it had never been documented.

When Game and Fish wildlife biologist Karen Rowe saw Linder's May 17 photo of a spoonbill on Facebook, she reached out to inquire about the sighting to see if the birds were potentially nesting in the state.

Rowe initially assumed the photo was taken outside Arkansas. When Linder told her the spoonbills were seen in Ashley County, Rowe said she started to wonder "if we had a connection where I could earn her trust," she recalled with a laugh.

"And not to be devious, but when you're a birdwatcher, you try to find out things about birds in the state and where they're occurring," Rowe said.

Rowe serves as the non-game bird program leader for the agency's wildlife management division. Knowing the potentially historic nature of the roseate spoonbill sighting, Rowe encouraged Linder to see if there were any nests pictured in her photos.

At Rowe's suggestion, Linder examined her photos, enlarging them on her computer. Sure enough, she spotted some pink.

"That kind of looks like they're sitting on a nest," Linder recalled thinking.

Linder and Rowe visited the wetland together with the property owner May 24 to see whether roseate spoonbills were indeed guarding ramshackle nests made of branches, which the birds pitch together on small cypress trees and shrubs. They thought they spotted one or two birds nesting, but they weren't certain, Rowe recalled.

When they visited the wetland yet another time Thursday, they saw two active roseate spoonbill nests with two different age classes of nestlings, Rowe said.

Linder originally visited the property in Ashley County because it is owned by an acquaintance, Craig Shackelford, whom she knew through her father and one of his friends. Shackelford and her father had raised the idea that Linder ought to visit the wetland and photograph wildlife, including the roseate spoonbills.

Linder said she had never seen the bird anywhere before, much less in Arkansas.

"It was like I had been picked up out of Arkansas and transported to the Everglades," Linder said of her first visit to the wetland.

As it turned out, Rowe also knew Shackelford through work banding barn owls years ago, she said, and doing marsh bird surveys.

The Ashley County wetland apparently has proved to be an attractive habitat for birds that aren't normally seen breeding in the state.

"I was literally dumbfounded because there were so many ibis and herons and egrets," Rowe said of her recent visit to the property. "I'd never seen a scene like that in Arkansas, and I've been to some unique areas. But the diversity of birds and the high level of activity was just awesome."

Rowe noted another potentially historic sighting in the wetland: nesting white-faced ibis, another water bird that is not known to have been documented breeding in Arkansas.

Linder and Rowe say they observed the white-faced ibis in the wetland carrying sticks -- a good indication of breeding. But because the birds were far away in the wetland's interior, they could not get close enough to confirm the presence of eggs or young birds.

They have been careful to observe the water birds from a distance to avoid disturbing their nesting, which Rowe said can be very damaging.

"They're not used to people being out in the wetland with them," Rowe said.

Anhingas, another long-necked water bird, also were spotted with babies in the wetland. According to Audubon Society records, anhingas have not been seen breeding in Arkansas since 1968, Rowe said.

What makes the recorded breeding of roseate spoonbills significant, Rowe said, is that the species is not known for expanding its range outside the waters of the southeastern United States.

She suggested the nesting of the roseate spoonbills in Arkansas has occurred because of "man-made intervention" by landowners like Shackelford and others nearby, who have converted what was previously farmland into wetlands under the U.S. Department of Agriculture's Wetlands Reserve Program.

As a result, the surrounding area in Ashley County can serve as a habitat with the capacity to support various wading birds, Rowe said.

The wetland is of such quality that "these roseate spoonbills didn't leave," Rowe said. "They stayed and nested."

Lyndal York, curator of records for the Arkansas Audubon Society, reviewed a final report that Rowe submitted Thursday with details of the historic sighting. In light of the photographic evidence, he said, there is no question the report will be accepted.

"We thought maybe they were nesting, but no one had ever gotten any clue as to where it was or when it was," he said Friday. "So this is unique."

Additionally, York said he believes climate change may be contributing to roseate spoonbills and other large water birds appearing in the wet, swampy areas of south Arkansas.

"With global warming, we're seeing a lot of species like that moving into the southern Arkansas and western Arkansas, in particular, from the west," York said. "These birds are probably coming from the Gulf Coast, I would guess."

Linder and Rowe welcomed the sighting of the roseate spoonbills as a positive event for the state at a time when bad news is never in short supply. The sighting has special significance for Linder as a wildlife photographer.

"I will have my name in the record book forever for documenting this," Linder said.