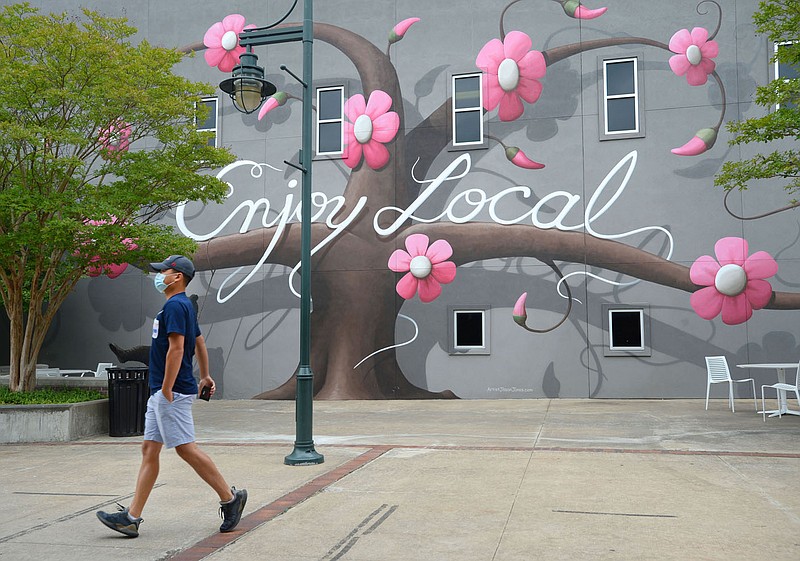 FAYETTEVILLE -- Advocates say an investment in public art can contribute to the economic recovery of Northwest Arkansas during the covid-19 pandemic.

"Public art has become one of the safest and best ways for the public to explore the arts and culture of specific locations, such as Fort Smith and Bentonville, while maintaining the safety and health of Arkansans," said Patrick Ralston, Arkansas Arts Council director. "For cities, this means public art can continue to be a strong tourism driver and help communities recover in the wake of covid-19 shutdowns."

Using art in public spaces as part of community planning and development has been growing nationwide over the past decade as partnerships, nonprofit groups and cities alike have created spaces and found money for artwork, Ralston said.

Arkansas' creative sector contributed $2.9 million and 33,513 jobs in 2017 to the economy, according to the U.S. Department of Commerce's Bureau of Economic Analysis. No breakdown was given for public art work.

"Public art adds enormous value to the cultural, aesthetic and economic vitality of a community -- even in pandemics," said Allyson Esposito, executive director of a regional art service organization founded by the Northwest Arkansas Council. "While museums and cultural institutions are closing and restructuring to accommodate state and federal guidelines of social distancing, public art is free and open in the most democratic of places, the urban environment."

Exploring art in public spaces may be the most comfortable way for people to experience art during the pandemic, said Molly Rawn, Fayetteville Advertising and Promotion Commission chief executive officer.

"The arts are such an important part of our community's culture, so while some artistic endeavors may be limited or unavailable due to social distancing, others like public art still allow us to experience expression and beauty, as well as promote meaningful conversations," Rawn said.

The pandemic presents an opportunity for cities to experiment with new and creative ways to experience the arts, Esposito said.

"When crisis happens, many look to the arts for guidance on how to solve a problem, and this is a perfect opportunity to have artists share in the conversation and help guide what the new normal of tomorrow will look like," she said.

"It's good for tourism. It's good for economic development, and it really can add a lot of character to a community," she said of public art. "That's what the city was looking for."

The city's Public Art Advisory Committee decided in April to seek public art projects by regional artists, Kerr said, and is accepting proposals for artwork to be installed on public property such as parks, community facilities and city offices through 3 p.m. on Friday .

"For artists, public artwork opportunities not only provide mass exposure for their artworks, but can provide needed financial relief," Ralston said. "Since March, we've seen mass cancellations for art receptions and exhibitions. Normal, in-person transactions and commissions have dried up for many of our artists, who are left seeking new ways to exhibit their work and earn enough money to survive the pandemic financially."

Investing in local artists has ripple effects throughout the region's economy, Esposito said.

"Creating public art is not a siloed process just within the walls of an artist's studio," she said. "The commissioning of public art and the funds are distributed between artists, fabricators, engineers, landscapers, electricians -- the list goes on. Public art supports the full creative economy."

Artists submitting proposals for the $15,000 project are encouraged to create artwork that reflects Bentonville's history, is an expression of Bentonville's growing diversity or promotes community harmony, Kerr said.

"Any proposals that come in and kind of meet one of those three are going to be seriously considered," she said, noting the committee will begin discussions on which public art piece to select for the project in July.

Upcoming projects in Bentonville include the Open Heart sculpture by artist Matthew Duffy of Washington, D.C. The piece will be installed in September within the roundabout at Southwest Bright Road and Southwest Gator Boulevard, Kerr said. The 8-by-8-foot heart sculpture will be made from aluminum diamond plates and will cost the city about $19,500 to create and install.

A majority of public art displayed in Bentonville is by outside artists, Kerr said.

"We just wanted to kind of make it a little more broad to see what we would get," she said, adding projects are selected and installed based on the best piece for a space, rather than where artists live.

Susan Norton, Fayetteville's chief of staff, said the city embraces all types of public art from visual arts, such as paintings or sculpture affixed in public places, to artistic expressions through dramatic and musical performances.

"That diversity is important to successfully present a variety of expression and talent," Norton said. "After all, civic vitality is what we all hope to achieve, and the evolution and emergence of a city's artistic identity can reap rewards for years and decades to come."

The city's creative focus is on planning for its cultural arts district, of which public art will be a significant factor, she said.

"Our strategy will ensure that public art has a solid foundation to remain important in the long-term trajectory of our city," she said.

The Fay Jones woods portion of the cultural arts corridor involves turning the 7 acres of woods west of the Fayetteville Public Library into a nature attraction, said Alan Pugh, staff engineer for the city.

"We are ensuring the physical infrastructure and foundation exists to host future endeavors on this new artistic and cultural canvas," she said.

The city plans to break ground on the project in July, Norton said.

The Fay Jones woods project is an aspect of the $31.7 million cultural arts corridor bond issue approved by voters a year ago. Other elements of the corridor include turning the parking lot west of the Walton Arts Center into a civic green space and improving the Razorback Greenway and West Avenue and its adjoining streets.

The city has also put out a call for Washington County artists to create artwork printed on mesh and attached to temporary construction fencing at South Gregg Avenue and South West Avenue along the developing corridor, according to a news release.

The theme will be Nature in the City, the release said, and the Fayetteville Arts Council will select four artists to submit proposals and receive a $200 stipend for their work. The council will then select two proposals to be printed and displayed on 400-foot-long sections of the fencing.

The submission deadline is Wednesday, the release said, and selected artists will receive an additional $850 stipend.

Rogers is investing in public art as a strategy for attracting talent, creating a sense of place, branding, stimulating the local economy and improving the well-being of the community, said Anna Watson, Rogers' Arts and Culture coordinator.

The city's Water Stop at Railyard Park public art project is an approximately $20,000 opportunity to invest in local artists and the city's economy, Watson said.

"Artists are able to keep creating, keep building, keep working," she said. "As such, Rogers makes progress on the intended outcome of building a thriving cultural economy and establishing itself as a partner to artists and cultural arts organizations in furthering local and regional cultural arts initiatives."

Rogers received a $798,870 grant for the project through the Walton Family Foundation Design Excellence Program to design and rebrand Frisco Park and the surrounding open space as part of its Downtown Rogers Initiative Plan, according to Luis Gonzalez, spokesman for the Walton Family Foundation. The urban park will be located on the east boundary of Rogers' historic district and will serve as a gateway to key amenities in the area.

An artist is being sought to design three creative, but functional, water towers to provide water for a children's play area, according to the call for artists. One of the towers will feature digitally controlled water display technology that allows for the projection of patterns and messages.

The Arts and Culture Office released a call for artists in April to create and install the water towers, Watson said.

"Putting a call out during the covid-19 era feels like a beacon of hope," she said.

The application deadline for the project closed May 15, Watson said, but an artist to complete the endeavor hasn't yet been selected. The project is scheduled to be installed in August, according to the city.

Investing in public art during the pandemic could present new opportunities for enrichment and discovery, Esposito said.

"As people choose 'staycations' with the pandemic at large, it is anticipated that more and more people will begin to rediscover the rich history and attractions within their communities, attending and spending more time at new parks and making a day of food, music, art and fun."

The pandemic has changed the art world, Ralston said.

"More efforts are underway to provide the arts in virtual formats. Cities are even creating virtual tours of their public artworks," he said. "With that said, there will never be a time when public artwork is not a good investment. These works bring communities together, provide beautification, create community engagement and dialogue, attract tourism and improve the quality of life for residents."

Not to mention the power art has for personal connection, Ralston said.

"Art has the magical ability to help us better understand each other. It can bring about empathy and humanize issues," he said. "From music to murals, art has the power to create dialogue among us and reveal what connects us, more than what divides us. For communities that are struggling, just this quality alone makes art invaluable." 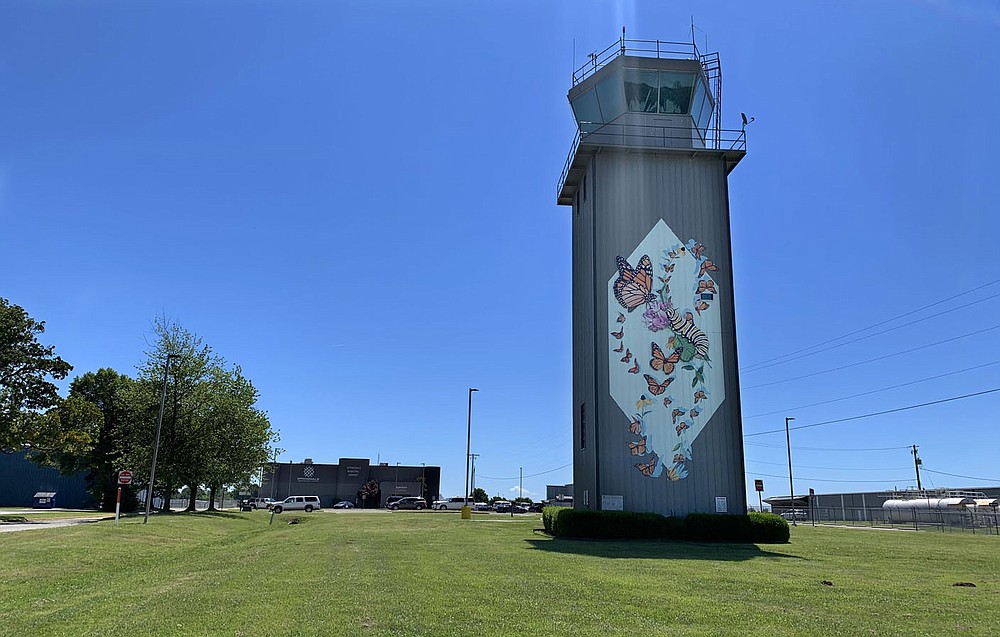 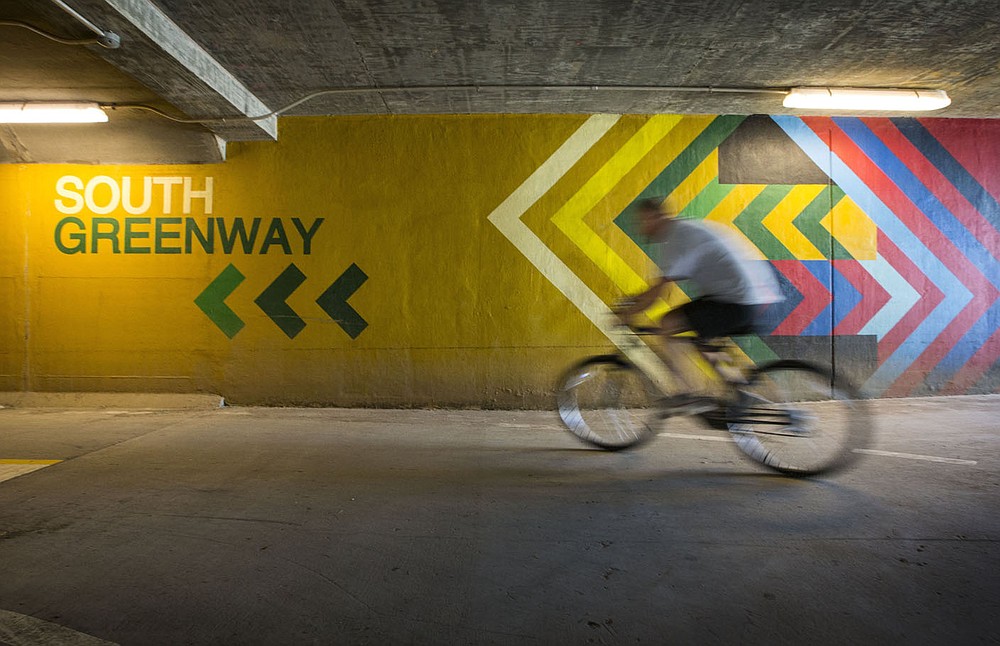 A cyclist rides past a wayfinding mural Saturday, June 13, 2020, inside the Razorback Regional Greenway tunnel at the intersection of Southeast J Street and Southeast 8th Street in Bentonville. The mural was painted in 2018 by Graham Edwards of Bella Vista and features directional guidance for trail users. Go to nwaonline.com/200614Daily/ to see more photos. (NWA Democrat-Gazette/Ben Goff)
More News

Fayetteville is offering the public a virtual update on the progress on the Cultural Arts Corridor project, including a 3-D overview video and new images of the corridor’s primary elements.

The update can be viewed on the City’s Cultural Arts Corridor webpage: http://www.fayetteville-ar.gov/culturalartscorridor.