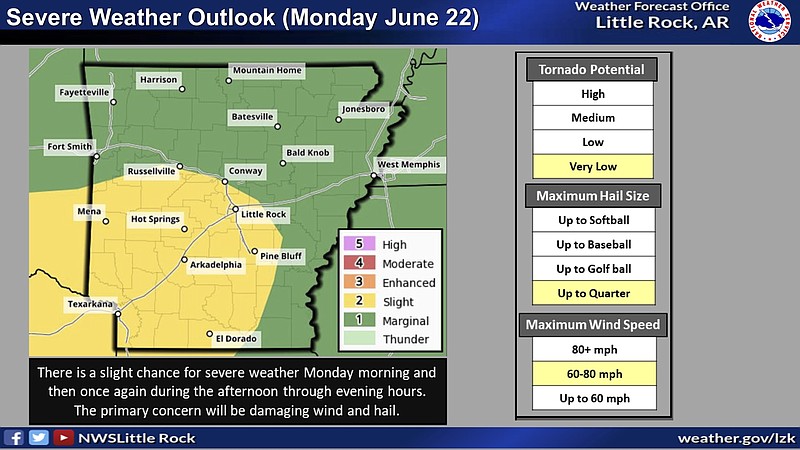 This National Weather Service graphic shows much of the southeastern quarter of Arkansas at a slight risk for severe weather on Monday.

Forecasters predict a chance for flash floods, damaging winds and hail in Arkansas through Tuesday morning, according to the National Weather Service.

Much of the southeast quarter of the state was at a slight risk of severe weather Monday morning and again in the afternoon as a line of storms followed a slow-moving cold front from the northwest region, according to a briefing by the agency’s North Little Rock bureau.

Forecasters posted flash flood warnings this morning for large portions of the state’s southern half, and said they expected severe thunderstorms later in the afternoon. Damaging winds are expected to reach speeds of up to 80 mph, and hail is predicted to become as large as quarter-sized. The possibility for tornadoes is very low, the briefing states.

Scattered showers are expected to yield between 2 to 3 inches of rain in the central and lower Delta on Monday, up to 1.5 inches in the upper Delta and less than 1 inch in the northwest regions, according to the weather service.