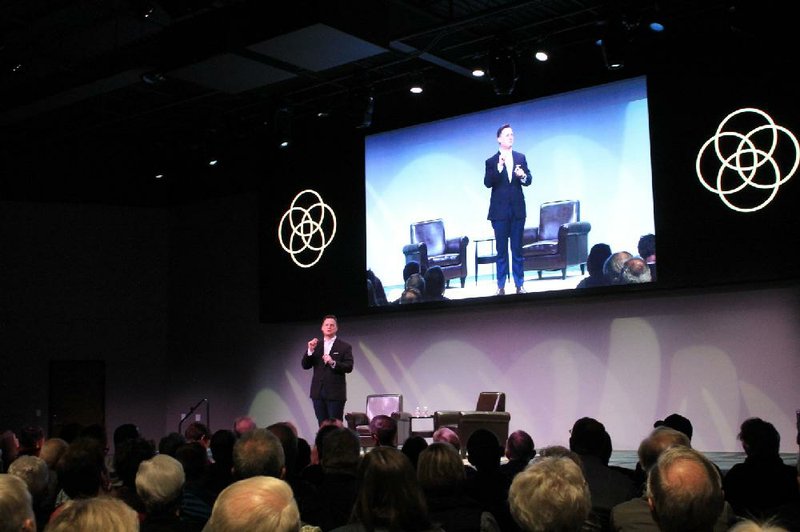 It's great to speak with others about Christianity and debate the subject, but never do it with lofty arguments and a closed Bible, Christian apologist Abdu Murray recently told an audience in Little Rock.

Murray is senior vice president of Ravi Zacharias International Ministries and the author of several books. A Muslim for most of his life, and formerly a lawyer, Murray was the featured speaker at the most recent installment of the event series City Center Conversations: Conversations About God, Life and Faith in the City, hosted by Little Rock's Immanuel Baptist Church and its senior pastor, Dr. Steven Smith.

It was the first event from the series to take place at Immanuel Baptist's new ministry building. City Center, which will eventually host services that include adult education classes and a dental clinic, was dedicated last week and was set to re-open its food pantry in the new location Tuesday.

Murray became the featured speaker after Zacharias, founder of the ministry, had to undergo emergency back surgery the week before the event and was still in recovery.

The nine-year journey to becoming a believer in Christianity began for Murray while he was working toward an undergraduate degree in his home state of Michigan. There, two men came to visit him at his apartment to discuss Christianity and returned most Thursdays to continue their discussion and debate their respective faiths.

"They were going door-to-door," Murray said, "[and] they were getting doors slammed in their face because the University of Michigan was like [the University of California at Berkeley] but cold -- just not exactly receptive to [a] conservative Christian message."

Murray began reading the Bible to find places where the text contradicted itself to take to the men.

"I wanted to knock the faith out of these guys," he said.

In coming across Christians in the past, Murray said he would find that their faith affiliation would stem from tradition handed down from their parents. But in reading Luke 3:8, which refers to God "raising up children of Abraham from the stones," Murray said he'd found a passage referring to truth trumping tradition and realized, in his evangelism as a member of Islam, that he also was practicing his faith as the result of tradition.

In Islam, "Allahu akbar" translates to "God is greater," Murray said, and the fundamental truth he was searching for was to be "understanding God to be the greatest possible being and worship him as such."

"Only the Lord of glory -- the Lord who is called God -- [can] the word have such an eloquent efficiency in his words that he sums up my entire nine-year search in one phrase: 'For God demonstrates his love -- his greatest possible love -- in that while we were sinners, God haters, Christ died for us.' "

Among other topics, Murray described the logic behind evidence that points at a higher being in cosmology.

Murray made a reference to a scripted line from the 1997 movie Contact, based on the book of the same name by scientist and agnostic Carl Sagan. In the movie, a character, in response to wonder about the existence of life in other parts if the universe, says, "If there wasn't, it would be an awful waste of space."

"What you'd have to think there is ... you have to assume that God is just an engineer -- and he is the master engineer, that's true -- but an engineer doesn't waste anything. They try to be as efficient as possible," Murray said. "But God is not just an engineer. God is also an artist."

The positioning of Earth among the universe makes a case for divine creation, Murray added, explaining that planet's positioning in the solar system "makes it possible for us to observe the maximum amount of the universe.

"Is it a coincidence that the only planet where there are observers present happens to be the one planet where you can observe anything -- and so God creates this for us to see," Murray said. 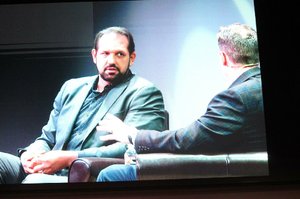 On a screen overhead, Abdu Murray (left), Christian apologist and and author, speaks during the most recent installment of the event series City Center Conversations, hosted by Immanuel Baptist Church. (Arkansas Democrat-Gazette/Francisca Jones)