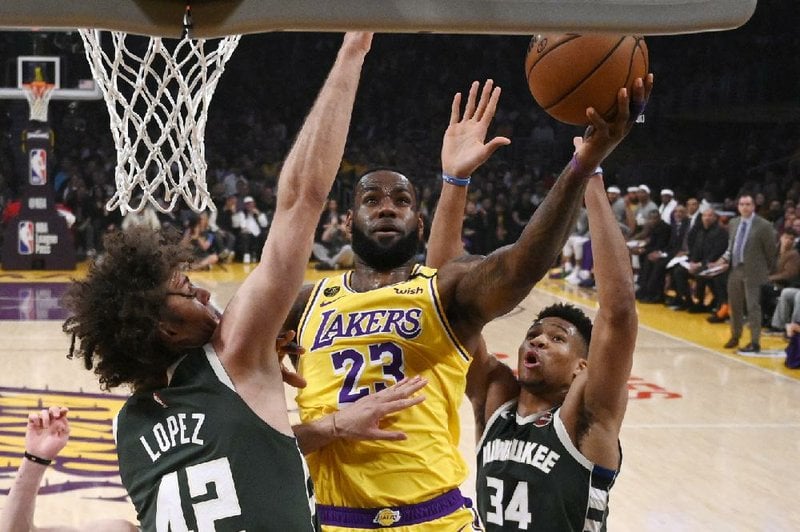 Los Angeles Lakers forward LeBron James (center)said if the NBA plays games without fans because of the coronavirus, he said he will not participate. James made the comment after the NBA warned teams about the potential of playing games in empty arenas. (AP/Mark J. Terrill)

The NBA wants its teams to prepare to play games without fans if necessary because of the coronavirus crisis, but LeBron James already says he won't play basketball in an empty arena.

The league circulated a memo to its teams Friday telling them to prepare in case it becomes necessary to play games without fans or media, as sports leagues in Europe have already done. The memo detailed potential actions that teams might need to take "if it were to become necessary to play a game with only essential staff present."

But when James was asked about that possibility after he scored 37 points in his Los Angeles Lakers' 113-103 win over the league-leading Milwaukee Bucks on Friday night, the NBA's leading active scorer was definitive.

"We play games without the fans? Nah, that's impossible," James said. "I ain't playing if I ain't got the fans in the crowd. That's who I play for. I play for my teammates, and I play for the fans. That's what it's all about. So if I show up to an arena and there ain't no fans in there, I ain't playing. They can do what they want to do."

The memo, obtained by The Associated Press, says teams should identify which team and arena people would be necessary to conduct games, and be able to communicate quickly with non-essential staff, as well as ticket holders and corporate partners.

Teams should also be prepared "for the possibility of implementing temperature checks on players, team staff, referees, and anyone else who is essential to conducting such a game in the team's arena."

No pro games in the U.S. have been called off yet. State officials in Florida said there were two presumptive cases of the virus in Broward County, where the NHL's Florida Panthers were facing the Montreal Canadiens on Saturday night.

NHL Commissioner Gary Bettman, at the Montreal-Florida game Saturday, would not answer if hockey has gone as far as to prepare for that contingency.

"I don't want to create any speculation or hysteria," Bettman said. "There are obviously a variety of consequences that we may have to focus on and we'll do that in the appropriate time, but let's not get ahead of ourselves here, OK? We're staying on top of it. We're in constant communication with our clubs and the players association and we're going to deal with this in as thorough, professional, on-top-of-it manner as possible. Let's everybody take a deep breath."

The NBA, in its Saturday night memo, said teams quickly need a process to distribute hand sanitizer to all players and team staff and to ensure that supply does not run out.

The NBA also urged teams to cut team travel parties "to essential individuals only," have team physicians join an upcoming road trip to study ways of limiting germ-exposure on the road and work with vendors -- like bus companies, hotels and meal providers -- to understand their cleaning practices and ensure they have minimal contact with players.

Flu hit a high-profile NBA player Saturday -- but not the coronavirus. The Golden State Warriors said Stephen Curry tested positive for influenza, and they started him on a treatment program.

"We have identified his probable source contact who is not part of basketball operations," the Warriors said. "He has no specific risk factors for COVID-19. He has the seasonal flu."

Baseball fans are still filling spring training parks, but they aren't getting quite the same access. Any other year, these spring games are an ideal chance for young fans to meet their favorite stars during batting practice. On Saturday, the Giants adhered to club and league wishes and mostly stayed clear, save for a couple players and coaches who used their gloves to bump fists.

The Nationals tweeted their temporary autograph policy Saturday, informing fans they won't be able to bring their own memorabilia to its weekly autograph meet-and-greet with players. Instead, the team is having players sign cards, programs and other items to be distributed at the event, and also periodically during games.

Similar measures have been taken in other sports. The ATP and WTP Tours have instructed tennis players not to accept pens, balls or other items from fans in the process of signing, and is also asking them not to share used towels, headbands and other equipment with fans. Ball kids will be given gloves to wear during matches, as well.

Seattle has been the epicenter of the coronavirus outbreak in the United States. The Seattle Sounders typically don't have any problems drawing around 40,000 for their home MLS matches at CenturyLink Field. Seattle hosted the Columbus Crew on Saturday night. It was the first major sporting event in Seattle since the region saw a major rise in the number of diagnosed cases and deaths.

Earlier Saturday, officials in Washington state raised the death toll from the coronavirus to 16. The Washington state Department of Health announced the two additional deaths and said the number of people diagnosed with the virus has risen to 102. At least 10 of those who died had been linked to a nursing home in the Seattle area.

The Sounders match is the culmination of a strange week for sports teams in the area, who answered as many questions about their preventative measures toward the coronavirus as anything happening on the field or court.

The Sounders opened the MLS season last Sunday with a home match against Chicago, but that was prior to the significant rise in diagnosed cases in the Seattle area. The Sounders announced a crowd of 40,126 for that opening win.

"This is a real situation," Sounders Coach Brian Schmetzer said this week. "The club obviously keeps me updated and the decisions that the club makes at the higher levels are above my pay grade. I go along with it, because it's a serious deal."