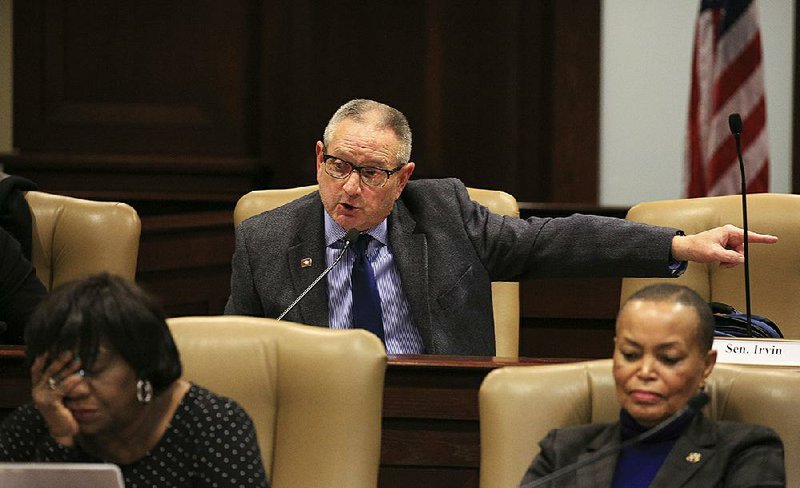 State Rep. Doug House on Monday floated the idea of the state treasury loaning funds to counties that can't afford their share of the cost of purchasing new voting equipment for the Nov. 3 general election.

House, a Republican from North Little Rock, tossed out this proposal during a meeting of the House State Agencies and Governmental Affairs Committee that also heard a pitch from Anna Claire Tilley, an 11th-grade student at Southside High School in Fort Smith, for Arkansas to implement online voter registration.

Sixty-four of the state's 75 counties had updated voting equipment for the March 3 primary election.

These 64 counties included 10 that Secretary of State John Thurston's office purchased new voting equipment for last year through Nebraska-based Election Systems & Software with the help of state funding made available under Act 808 of 2019 plus funding from most of those counties.

Act 808 diverted $8.24 million in excess funds from the property tax relief trust fund to the county voting systems grant fund. The $8.4 million in state funds included about $2 million to reimburse Ashley, Benton and White counties for half of what they paid for their new equipment. (Act 808 also increased the homestead property tax credit from $350 to $375 per parcel.)

Officials in Scott and Pulaski counties signed contracts last month to have Thurston purchase voting equipment for their counties, with the aim of using the equipment in the Nov. 3 general election.

That leaves Bradley, Conway, Fulton, Jefferson, Lee, Monroe, Newton, Searcy and Stone counties with aging voting equipment and without contracts to have Thurston purchase new equipment for them too.

"We have about five counties that have expressed to me that they will not have their share of the funding, basically no matter what we do," said Leslie Bellamy, director of elections for the secretary of state's office. Afterward, she said they are Fulton, Jefferson, Newton, Searcy and Stone counties.

"There are four that I know are ready to look at it and we'll be going around and talking individually to each county," she told lawmakers, referring to Bradley, Conway, Lee and Monroe counties.

"One of the things you realize as we start to travel, counties' plans change," Bellamy said.

"As we sit around with the county judge, county clerk [and] the county election commission, a lot of the numbers that they turned into us changed as discussions started, and that probably will be the case for the last nine [counties]," she said.

House said he asked state Treasurer Dennis Milligan's office whether it would be interested in loaning funds from the state treasury at about a 2% to 2.5% interest rate "to the counties to finance their voting equipment, understanding that some of the counties may have trouble coming up with several hundred thousand dollars at one time to make a purchase.

"If they could stretch that [loan] over a period of two or three years, that might be an advantage for some of them, not all of them," he said. "It would be a quorum court decision in each instance."

He said, "Apparently there was some resistance with our Department of Finance and Administration."

Afterward, Milligan said in a written statement that "as a former county official, I understand the struggles that counties face during elections, and I wholeheartedly support the integrity of our election systems, which was one of my motivations when I served as Republican Party chairman in 2007.

"I'm not opposed to the idea of loaning money to counties in order for them to update their voting equipment; however, that is not a decision that I am statutorily allowed to make on my own," said Milligan, who is a former Saline County circuit clerk.

"According to state law, such decisions must be approved by the State Board of Finance. However, I am sure the Board would be glad to discuss this if the Legislature deems the Treasury the most appropriate funding vehicle," said Milligan.

Scott Hardin, a spokesman for the state Department of Finance and Administration, said in a written statement that "there is not currently a mechanism in Arkansas law that would allow DFA or the Treasurer to loan to counties for this purpose or collect interest.

Asked how the secretary of state's office plans to use $5 million in federal Help America Vote Act funds, Thurston spokesman Kevin Niehaus said in a written statement that "we are still gathering input and information on the HAVA funds and don't have a specific plan yet."

But Bellamy said, "It is something that we are really not sure how we feel about it completely yet."

Tilley said some other states have applied for federal grants to implement online voter registration.

Rep. Justin Boyd, R-Fort Smith, said he plans to propose a measure in the 2021 regular session to implement online voter registration in Arkansas.

The measure would require a two-thirds vote for approval in the 100-member House and 35-member Senate because it would amend Amendment 51 to the Arkansas Constitution, he said.