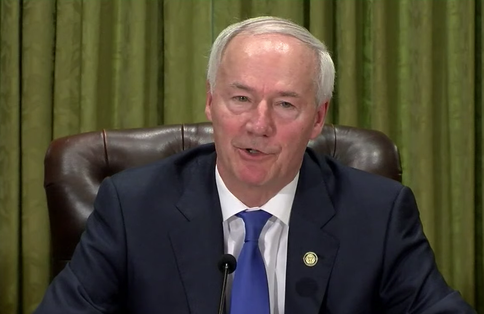 Arkansas Gov. Asa Hutchinson speaks at a news conference Wednesday morning in this still captured from video provided by the governor's office.

The patient, whose name wasn’t released, had an out-of-state travel history, Hutchinson said. Arkansas Department of Health Secretary Nate Smith said the agency is still investigating which states the individual had recently visited.

Jefferson Regional Medical Center said in a news release early Wednesday afternoon the patient is at their facility.

Smith said the patient was in intensive care and had not been monitored as a person under investigation for the illness. That classification is defined by the CDC as people who should be monitored due to recent travel to areas with large outbreaks or close contact with someone confirmed to have the disease.

The state Department of Health has sent a team to the hospital, where the patient is in isolation. Hutchinson said the case is considered "presumptive" because, while the test was performed by the state Health Department, the results will be sent to the CDC for confirmation. According to the governor, this is routine practice.

“There’s not any general risk to the public,” Hutchinson said. “But the Department of Health team will be taking the proper precautions there as the patient is in isolation.”

Smith said that as of Wednesday morning officials hadn’t seen any evidence of the virus’ spread in Pine Bluff or elsewhere in the state. The department is identifying potential contacts with the patient, monitoring them and testing any who have symptoms.

“We’re going to act as if it’s a true positive,” Smith said.

Administrators at Jefferson Regional, where the patient is currently receiving care, are asking that all visitors enter through either the facility’s emergency department or 40th Avenue entrance. Visitors will be screened for symptoms before entering and must provide a patient’s name in order to enter.

The governor signed an executive order Wednesday afternoon declaring a public health emergency, according to a news release from his office.

According to the release, Hutchinson has been in "frequent communication with Vice President Mike Pence, the CDC, the Department of Health and Human Services, and numerous other governors for updates and information."

Also on Wednesday, the CDC announced that Arkansas will receive $6,205,347 to support coronavirus preparedness and response, according to the agency’s website.

Altogether, the CDC awarded over $560 million to states, localities, territories and tribes, according to a news release issued by the U.S. Department of Health and Human Services.

The presumptive confirmation triggered several initiatives by the state, which were presented to the governor Wednesday morning. Among them is a new travel policy for the next 60 days: cabinet secretaries must approve out-of-state travel by their employees. Approval will be based on guidance by the Health Department and the urgency of travel.

Decisions will be made on a case-by-case basis, the governor said.

“It’s not a complete travel ban, because we want to continue business,” he said. “We want people to continue doing business in Arkansas.”

Hutchinson said that there isn’t currently any need to disrupt school activities or other state services. State employees don’t need to do their work remotely, though officials are prepared if necessary to “go into more remote operations to continue state services,” he said.

Hutchinson said he has asked Smith to expand the state’s capacity for testing, making tests available for more people who show symptoms.

The Health Department can currently perform at least 20 tests a day, but commercial labs are also performing tests and reporting results to the agency, according to the secretary.

“As time goes on, I would say that more and more of those tests would be done by commercial, private labs, and that our lab would be doing more confirmatory testing,” he said.

[Video not showing up above? Click here to watch » https://www.youtube.com/watch?v=qDR88biM7Y8]

Currently, a physician who suspects a patient has covid-19, a respiratory illness caused by the virus, can order a test, collect a specimen and send it to a commercial lab, according to Smith.

The governor also encouraged Arkansans planning to travel to consider whether the location to which they intend to go has any confirmed cases, whether the trip includes large gatherings with others from unknown locations and whether, after returning, they will have contact with the elderly or large groups.

Information for this article was contributed by Nyssa Kruse of the Arkansas Democrat-Gazette.