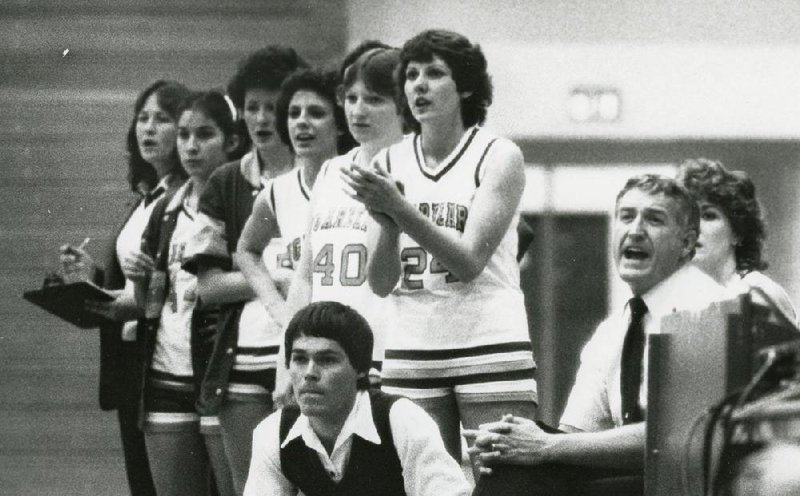 Ron Marvel (right) coaches the University of Central Arkansas women’s basketball team from the bench in 1983. Marvel, who was 489-207 in 24 seasons as UCA’s coach, will be inducted into the Arkansas Sports Hall of Fame on Friday night. (Democrat-Gazette file photo)

Ron Marvel was one of 10 graduates in Coal Hill High School's Class of 1961.

According to U.S. Census figures from the Encyclopedia of Arkansas website, Coal Hill (Johnson County) had a population of 704 in 1960. It was the rural life there that laid the foundation for Marvel's success coaching high school and college basketball for 39 years.

NOTEWORTHY Was winningest women’s coach in state history with 489 victories when he retired (since broken by UALR’s Joe Foley. … Compiled 489-207 record at UCA. … 36th in NCAA Division II women’s basketball history with 489 victories. Winning percentage of 70.3 ranks 29th. … Was winningest coach in any sport at UCA. … Won nearly 1,500 games in 39 years as a junior high, senior high and college coach. … Also coached tennis at UCA for 13 years. … Member of UCA and College of the Ozarks sports halls of fame.

The seventh in a series profiling inductees into the Arkansas Sports Hall of Fame Class of 2020.; Also coached tennis at UCA for 13 years. … Member of UCA and College of the Ozarks sports halls of fame.

Marvel is being honored for his contributions when he is inducted Friday night into the Arkansas Sports Hall of Fame at the Statehouse Convention Center in Little Rock.

When he retired from the University of Central Arkansas in 2004, Marvel was the state's winningest coach in women's college basketball -- since surpassed by longtime adversary Joe Foley -- and still has more victories (489) than anyone in any sport in the school's history.

Marvel said there was no way he was getting into the family business, saying it was sports and his high school coach Leroy Douglas that got him started down his dream path.

"My dad worked at construction, so we were constantly moving," Marvel said. "Every three or four months we were at a different job or different town. The one thing that was consistent for me during all that time was that wherever I moved, I would get on a ball team if it was a baseball team or a basketball team. Sports just became my identity because I could always make friends and get to know people.

"When I got into the eighth grade, my mother decided that we were going to put me into a school until I graduated. So we settled in the town of Coal Hill. Leroy became my instant hero. I wanted to be like Leroy. He knew so many people, and he was an ex-Major League Baseball player and had gotten hit in the head by a fastball. At that time, they put a steel plate in your head and told you your career was over. So he came home and started coaching there at Coal Hill. He wasn't even out of college yet."

Marvel and Douglas lived less than a quarter mile from each other, and they often threw a baseball or played basketball at school or home.

"Sports was pretty much my life besides my dad working me on those construction jobs," Marvel said. "I hated working construction. I knew I didn't want to do that. I saw Leroy's life, and I wanted a life like his."

Marvel married his wife Jeanette a week after high school, and the two agreed he was going to attend college at the College of the Ozarks in Clarksville. They both worked part-time jobs. Jeanette, who Marvel calls the brains of the family, also helped him with his schoolwork, and he graduated in three years.

Then it was on to Fountain Lake for nine years, where he again coached all four teams, but caught his career break thanks to some rejection along the way.

Because of Douglas, Marvel made coaching an aspiration at an early age. When he was in college, he upped his goals to include coaching collegiately by the time he was 35. After getting passed over at his alma mater College of the Ozarks a few times, then-UCA athletic director Sid Simpson came calling.

"Dr. Simpson told me we've got a women's coaching job over here and would like to talk to you about it," Marvel said. "I met him at Gulpha Gorge [Campground in Hot Springs] at a picnic table, and we sat there at that picnic table about four hours. He told me he'd like for me to come look at the job and interview with the faculty committee. When he told me what it paid, I told him I couldn't do it because I'm making more money right where I'm at. Then he said, 'Coach, I'll tell you what. If you come and everything works out, and you get the job, next year I'll take care of that pay for you.' And he did it."

Marvel's first UCA team in 1980-81 went 17-11 to begin a stretch of 24 consecutive winning seasons that he maintained until he retired in 2004. The 17 wins were a stark improvement from the previous two seasons when the Sugar Bears won a combined 18 games.

Marvel plowed ahead on the recruiting front by sticking with his small-town roots, landing two of Arkansas' best in-state players and each from tiny high schools similar to Coal Hill. Marvel told Rose Bud's Terri Conder Johnson and Judsonia's Natalie Martin Shock that something big was going to happen in Conway, and they should come along with him for the ride. Johnson was wavering because she also had an offer from the University of Arkansas.

"I actually committed to UA on the phone," said Johnson, who also is a member of the Arkansas Sports Hall of Fame. "I sat down with my parents and was real upset about it. They were like, 'We were trying to let you make the decision, but we'll tell you we want you to go to UCA because we'll get to see you play more.'

"I called Coach Marvel back and told him I was going to go to UCA. He said it was like the happiest day of his life at that time."

Johnson and Shock became NAIA All-Americans and were 96-20 in their four seasons at UCA, winning three conference championships. Their 26 victories in 1983 were a school record until Marvel topped that with his 2003 team.

"I just knew in the recruiting process he was very honest, very straightforward," Shock said. "He just had that way about him. You trusted him. At that time, in Arkansas anyway, small schools was where it was at with basketball. Small-school Arkansas was where all the talent was in the state. He knew where to go get the players. He knew where to get those small-town kids because that's what he had grown up with."

Both former players agree about Marvel's genuine, small-town personality, but added that he did have a way of getting the team's attention by speaking loudly. Later, he'd display some levity with a joke, story or even an apology.

"He was very very demanding on us," Shock said. "He expected our best in practice and games. He'd chew your butt in a heartbeat. Sometimes it would go from a pretty tough practice with a lot of butt chewing, then we might get together at the end of practice and there would be a funny story. Invariably, every story or every joke he's ever told, he always laughs before he gets to the punchline. I don't know how many times I've heard some of them, and I'm still going to laugh just because of how he tells them."

Johnson recalled one halftime when he got upset with the team and knocked over a tray of water cups on a trash can in the locker room.

"Very rarely, he would just blow up and yell at you all the time," she said. "Every once in a while when he would get really frustrated with us, that temper would show up. It straightened you up quickly. That night, he reached over there and knocked every one of those cups off that trash can all over the floor. It was so uncharacteristic that when he did that the next day when we had our team meeting, he would apologize for getting upset like that."

Marvel said two victories stood out more than his others at UCA, and both involved defeating legendary coaches. There was the three-overtime victory in 2002 at Delta State and Lloyd Clark in the NCAA Division II South Regional. Clark is still the all-time leader in winning percentage (83.4%) in Division II women's history.

After bitter struggles with Arkansas Tech through the years in the Arkansas Intercollegiate Conference, Marvel got the last word in Foley's final game with the Golden Suns as the Sugar Bears advanced to the NCAA Division II Elite Eight, the Sugar Bears' deepest postseason run in program history.

"Ron set a great tradition at UCA," Foley said. "He was a tough coach to coach against. He was one of the true gentlemen I coached against. He never got out of control. Never said anything negative. Always a class act."

Marvel got to coach his daughter, Rhonda, during his early years at UCA. Later, he led the school's women's tennis team for 13 consecutive seasons and coached his younger daughter, Robbie, along the way. He even came out of retirement to finish the 2008 season with the Sugar Bears when UCA fired Marvel protege Checola Seals-Horton, a two-time first-team NAIA All-American (1991, 1992) from England who led UCA to a school-record 28 victories in 2004-05, the year after the legendary coach retired.

Marvel said it's because of his wife's love, strength and being the "brains of the family" that he is going into the hall of fame. Jeanette Marvel died in 2014.

"I loved every minute at UCA and could never think of a better place to work," Marvel said. "Sports revolved around our whole family. At one time, both my sons-in-law were coaching and both my daughters were coaching. I have three grandchildren that were playing and my wife was handling all of that. She was going to a game every night somewhere. She was a fantastic and most special lady. I don't see how she put up with all the ballgames and all the directions we were all going. I sure miss her and wish she could be there when I get inducted."