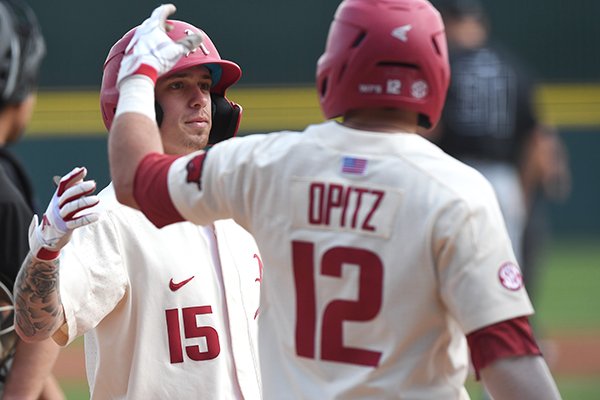 Arkansas shortstop Casey Martin (15) is greeted at home plate by catcher Casey Opitz (12) after Martin hit a home run during a game against Grand Canyon on Wednesday, March 11, 2020, in Fayetteville. ( J.T. Wampler)

FAYETTEVILLE -- The last play of Dave Van Horn's 700th win at the University of Arkansas was a crazy double play.

Two Razorback infielders went to the dirt, another had to make a relay to first base with a runner bearing down, and the umpires had to review a bang-bang play at first before the Hogs officially closed out and celebrated a wild 10-9 victory over Grand Canyon on Wednesday.

Arkansas Coach Dave Van Horn announced his pitching rotation for the Mississippi State series as lefty Patrick Wicklander on Friday, right-hander Connor Noland on Saturday and TBA on Sunday, likely between Caleb Bolden and Kole Ramage. … Grand Canyon reliever Frankie Scalzo made a great reflex catch, and maybe saved himself injury, by catching a scalding line drive toward his face off the bat of Casey Opitz in the ninth inning. … Arkansas freshman Will McEntire’s ERA rose to 1.12, tied for fourth on the team with Bolden, after he allowed his first earned run, a solo homer to David Avitia, in six innings on Tuesday. … Zebulon Vermillion is the only remaining Razorback with no ERA after Jacob Burton and Evan Taylor allowed two each on Wednesday.

No. 15 Arkansas' first one-run win of the year ended on the clutch double play with freshman Peyton Pallette closing out the first save of his career.

Third baseman Jacob Nesbit made a diving stop on a tricky grounder in the hole and flipped to second baseman Robert Moore for a force out, then Moore's throw nipped catcher David Avitia at first as Cole Austin stretched, held the bag and caught the low, wide relay.

Arkansas (11-5) won its fourth consecutive game by sweeping the Antelopes (9-9) on a day when the ball was being sprayed all over and out of Baum-Walker Stadium before a crowd of 2,111.

"Kind of felt like it was gonna be like this," Van Horn said. "The ball was flying today in batting practice. Beautiful day. They have a good team. It didn't go their way [Tuesday], and today was going to be a dogfight and that's exactly what happened."

Grand Canyon outhit the Razorbacks 12-11 and rallied from a 10-5 deficit, but could not come up with a clutch hit against the right-hander Pallette, who walked two in the ninth before notching the two-inning save.

"Man, it was something special," Pallette said. "That was the first time of me saving here, and it was really an honor to come out on that mound and get that one for the Hogs."

[Video not showing up above? Click here to watch » https://www.youtube.com/watch?v=ZfW3qUsuVfc]

Arkansas shortstop Casey Martin bounced back from a four-strikeout day by going 3 for 5 with a three-run home run off starter Zach Barnes (2-1) and 4 RBI.

Martin's three-run shot into the Arkansas bullpen came in the bottom of the first inning after Grand Canyon's Juan Colatao hit a two-run home run over the right-field wall off Kevin Kopps in the top of the frame.

"It gave our team a momentum swing right there," Martin said. "We got back on top real quick. Anything can happen, but the momentum was on our side, so that's obviously big-time, especially in a game like this."

The win went to freshman left-hander Zack Morris (1-0), whose scoreless seven-out stint behind Kopps stood out on a day when ERAs suffered.

[Video not showing up above? Click here to watch » https://www.youtube.com/watch?v=sUwx9vyuJ-U]

"My job was to throw strikes, go in there and compete, execute pitches and just try to put this team in the best-case scenario to win," said Morris, who said he relied mostly on a fastball and curveball.

"I thought he threw the ball extremely well," Van Horn said. "He hasn't complained, because he probably could have, because we should probably give him the ball a little more. We have a lot of confidence in him."

Arkansas' six other pitchers outside of Morris and Pallette either gave up runs or allowed inherited runners to score.

The Razorbacks led 10-5 after scoring four runs in the bottom of the sixth. Grand Canyon made it interesting by answering with a four-spot in the seventh.

[Video not showing up above? Click here to watch » https://www.youtube.com/watch?v=eQO-22dwc2c]

Brock Burton drew a walk off Pallette to open the ninth. Cuba Bess hit what could have been a double-play ball to Martin at short, but his relay to first short-hopped Austin and caromed into the stands to put a runner at second base. Pinch hitter Tayler Aguilar drew another walk before Avitia's fateful ground ball toward the hole.

"I thought it was a great double play," Van Horn said. "It was a tough ball in the hole, wasn't hit real hard. Nesbit did a nice job of staying down on the ball. I thought it might get under his glove because it was one of those funny little hops.

"He made a nice throw, and a really good turn by Robert. Just a little wide right over there. Really good stretch by our first baseman.

"But we had a chance to turn two double plays in one inning, and a lot of times you don't overcome that with a one-run lead and a freshman on the mound that's throwing his second inning trying to close a game for the first time in his life -- at this level."

Martin said he was about to dive just to try to keep the ball on the infield before Nesbit cut it off and started the twin killing.

"Moore has extremely fast hands, and we have an athlete over at first this year, a big athlete, so good job by both of them," Martin said. "Cole stretching out to make the final play, not an easy play ... he went out as far as he could and I guess they just barely got him."

Matt Goodheart had a two-run single in Arkansas' three-run second inning, and his solo home run over the scoreboard with two outs in the sixth ignited the four-run rally. Martin doubled and scored behind Goodheart, and Moore added a two-run single.

Arkansas right fielder Heston Kjerstad went 2 for 5 to lower his batting average to .448 and extend his hitting streak to all 16 games.

Van Horn downplayed his 700th win at Arkansas in his first shot at it when asked whether it meant anything to him.

"Yeah, I guess so," he said. "I mean, it's better than 600. I appreciated it. I've had a lot of good players. It's like I told the players after the game, they're congratulating me and I'm congratulating them, telling them, 'I didn't play in any one of those games.' "