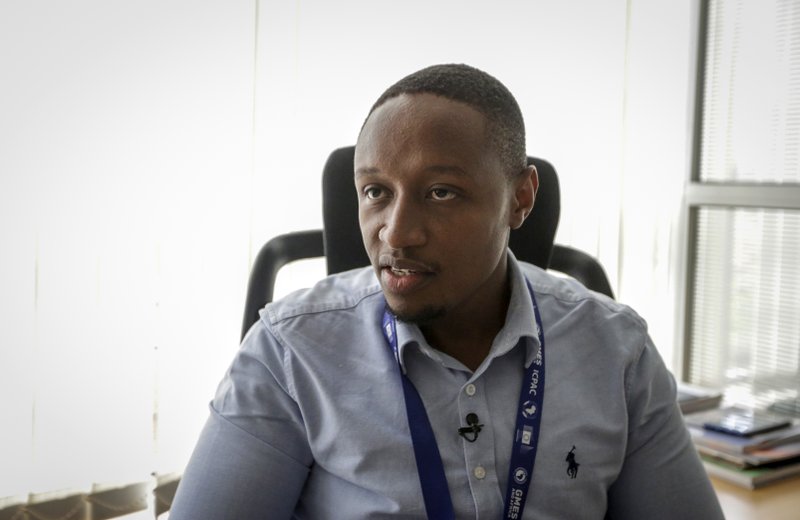 In this photo taken on Thursday, March 5, 2020, Kenneth Mwangi, a satellite information analyst at the Intergovernmental Authority on Development's Climate Prediction and Applications Center, speaks to The Associated Press in Nairobi, Kenya. (AP Photo/Khalil Senosi)

KAMPALA, Uganda -- A supercomputer is boosting efforts in East Africa to control a locust outbreak that raises what the U.N. food agency calls "an unprecedented threat" to the region's food security.

The computer, a donation from Britain, uses satellite data to track locust swarms and predict their next destination. Quickly sharing the information of the locusts' movements with regional authorities is key to controlling the outbreak, as even a small swarm of locusts in a single day can move nearly 100 miles and consume the amount of crops that would otherwise feed 35,000 people.

Based in a regional climate center in Kenya, where the insects have been particularly destructive, the supercomputer system "produces extensive weather forecasts to predict the high winds, rainfall, and humidity that provide ideal breeding conditions for locusts so climate experts can predict their next destination," the U.K.'s Department for International Development said in a statement. "By improving early warning systems we are helping charities and African governments to take rapid action to protect vulnerable communities."

Kenya, Somalia and Uganda have been battling the worst locust outbreak that parts of East Africa have seen in 70 years. Swarms have also been sighted in Djibouti, Eritrea, Tanzania, Congo and South Sudan, a country where roughly half the population already faces hunger after years of civil war.

The threat from the locusts "remains extremely alarming" in the Horn of Africa, where "widespread breeding is in progress and new swarms are starting to form, representing an unprecedented threat to food security and livelihoods at the beginning of the upcoming cropping season," according to a warning issued this month by the U.N. Food and Agriculture Organization.

Locust swarms, sometimes as large as some cities, can destroy crops and devastate pasture for animals. Aerial spraying is generally considered the only effective control method.

Officials in Kenya's capital, Nairobi, where the supercomputer is based, said the technology will boost their efforts in tracking locust swarms.

"The forecast is quite useful because it helps them to focus their efforts in the areas that are most likely to be affected by the desert locust in the coming, say, 10 days," said Abubakr Salih Babiker, a climate scientist at Nairobi's regional climate center.

The U.N. recently raised its aid appeal relating to locusts to $138 million, up from $76 million, saying the need for more help is urgent. Experts have warned that if the number of locusts is unchecked they could grow 500 times by June.