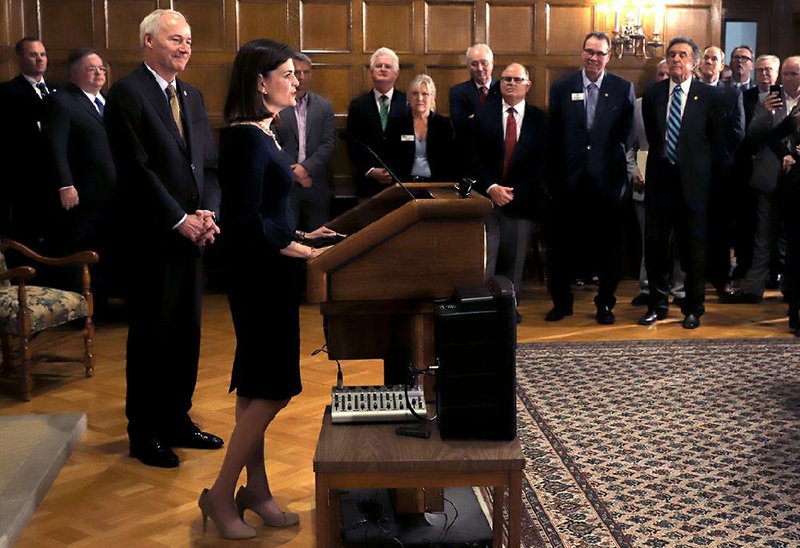 Gov. Asa Hutchinson (left) announced Thursday at the state Capitol that Little Rock business consultant Marie Holder (at lectern) was named to the Arkansas Highway Commission. As a commissioner, “I will put safety first in every decision I make,” Holder declared. (Arkansas Democrat-Gazette/John Sykes Jr.)

Gov. Asa Hutchinson on Thursday named Marie Holder, a Little Rock business consultant and his top political fundraiser, to the Arkansas Highway Commission to fill out the term of the late Tom Schueck.

Schueck's 10-year appointment ends in January. The governor said he has selected Holder, a 43-year-old Mississippi native, to serve a full 10-year term beginning Jan. 15, a day after her fill-in term ends.

Hutchinson said the vacancy on the five-member commission is too important to remain unfilled for long, noting that voters will consider a proposal to make permanent a 0.5% statewide sales tax devoted to road work in the November general election. In 2012, voters approved the 0.5% tax for 10 years.

"I wanted to make sure we had a full complement of commissioners as we go into a very important time in Arkansas with Issue 1 on the ballot and with so many decisions the Highway Commission has to make daily," he said.

In addition to the death of Schueck, who was in his second year as commission chairman, the Arkansas Department of Transportation, which the commission oversees, had a change in its leadership.

Lorie Tudor, previously the agency's deputy director and chief operating officer, will become director effective March 20. She will replace Scott Bennett, who announced his retirement on Feb. 19 after nine years in the post.

Hutchinson had earlier appointed Holder as a member and consumer representative on the Arkansas Medical Board.

She also is his chief political fundraiser, serving as treasurer for his successful 2018 gubernatorial reelection campaign and running his political action committee, ASA PAC.

In an interview, Holder said she resigned from the political action committee Wednesday.

The governor said he has known his appointee for "many years" and praised her service on the medical board. In the private sector, she is president of Holder Consulting, a post she has held since 2015. She is a graduate of the University of Mississippi.

"She is smart, she is talented, she is tough and she is service-minded," Hutchinson said. "And I think that is exactly what we need in a new highway commissioner.

In her brief remarks, Holder made no bones about her support for Issue 1.

She noted that she arrives in her new position as a mother of two daughters, including 16-year-old Alex, who just got her driver's license. Her husband, Ryan, and her other daughter, Katherine, 9, also were present for Thursday's announcement.

"I will put safety first in every decision I make," Holder said. "My commitment to safety begins with encouraging voters to go to the polls Nov. 3 and vote yes on Issue 1. This continuation of highway funding will ensure we can provide critical maintenance and improvement to Arkansas' state highway system.

"As a businesswoman, I will work to promote transportation system's fiscal responsibility and transparency. It is a great honor to fulfill the term of Tom Schueck. Tom was a great advocate for the people of Arkansas and the 2nd [Congressional] District."

Holder is at least the fourth woman to serve on the Highway Commission. Former state Rep. Prissy Hickerson, R-Texarkana, was the most recent female commission member, serving from 1999 to 2009. She was appointed by former Gov. Mike Huckabee.

"I wanted to have someone who is highly qualified, who is trustworthy, highly committed and has experience in service," Hutchinson said. "Marie Holder fits that category. Obviously, by the fact that she brings diversity to the commission is an added bonus. But she stands on her own right as someone who has contributed greatly to the state of Arkansas, that is a leader, that is a smart businesswoman. She brings a lot to the table in her own right."

Earlier in the week, the commission held a special meeting to elect Robert Moore Jr. of Arkansas City to be chairman through January 2023. Alec Farmer of Jonesboro was elected vice chairman.

The next regular meeting of the commission is scheduled for Wednesday. 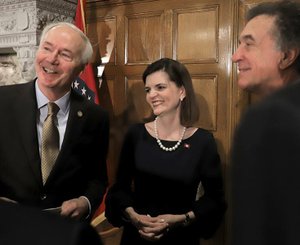