FILM REVIEW: Loud and violent 'The Hunt' signifies nothing much 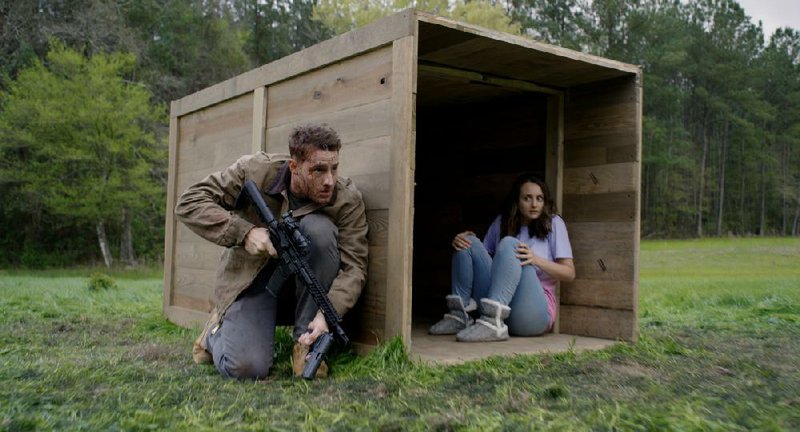 Members of the hunted class Trucker (Justin Hartley) and Dead Sexy (Sylvia Grace Crim) try to stay alive during the most dangerous game in Craig Zobel’s The Hunt.

After finally seeing The Hunt, it's pretty obvious the filmmakers had no particular intention of encapsulating our current political climate per se, but through the fiery controversy and idiotic rhetoric that damned the film from the start, director Craig Zobel, and screenwriters Damon Lindelof and Nick Cuse, have inadvertently produced what might be considered a perfect meta distillation of where we are as a society at the moment.

Produced by horror-and-B-movie specialists Blumhouse, it's easy to see (now) what was originally intended as a hyper-violent satire designed to impugn the dignity of both sides of the political spectrum but, as reflective of the current climate, that is decidedly not what happened.

A quick primer for those of you unaware of this nonsense: In August, shortly before it was to be originally released at the end of September, there were two mass shootings in the United States -- in El Paso, a racist shooter killed 22 people in a Walmart; that night, another nine people were shot and killed by a gunman in a bar in Dayton, Ohio -- which led the producers to question how appropriate it would be to release a film in which a group of rich liberal "elites," capture, kidnap, and hunt down a group of conservative "deplorables" (take note of that word).

A short while later, an article concerning the film's status in The Hollywood Reporter made mention of a line of dialogue (actually a text message) that included this reference: "Nothing better than ... slaughtering a dozen deplorables." Though the article gave that quote zero context (which we'll get to shortly), it was enough to send right-wing media (i.e., Fox) into a froth, breathlessly denouncing the film (which no one had yet seen) as being yet another example of how "demented and evil" the left had become.

The uproar intensified to the point where Universal made the call to pull it and figure out another plan of distribution. Now, some six months after its initial slated date, it's finally being brought out in the open, with the ingenious tagline "The Most Talked About Movie of the Year Is One That No One's Actually Seen!"

Given that brutal inception, was all the fuss worth it? In a word, no, though that's not to say there's no fun to be had with the thing. You just have to view it through its originally intended lens, a bloody, idiotically violent thriller. It's messy, often nonsensical, and its central idea makes for a sloppy sort of metaphor (conflating, as it does "liberal" and "rich"; and "conservative" and "blue collar," a tired and deeply inaccurate stereotype). Any deeper reading concerns all the sturm und drang surrounding it instead of the film itself.

As far as the plotline goes, after some less-than-subtle foreshadowing, it more or less begins out in the woods, where a dozen conservatives (including Emma Roberts, Ike Barinholtz, Sturgill Simpson and Kate Nowlin) are scattered about after having been drugged and flown somewhere remote. They eventually lose their rubber gags and congregate in front of a large wooden box that turns out to be filled with weapons of various kinds (and a cute pig in a shirt that skitters away, unmolested).

Shortly after arming themselves, they are summarily dispatched by a bunkered cabal of murderous liberals (including Glenn Howerton, Steve Coulter, Teri Wyble and Vince Pisani), via high-caliber bullet, arrow, spike pit, IEDs and whatever else at hand. That is, all but one. Crystal (Betty Gilpin, in a fine performance), seems more than a little adept at killing people and staying alive under difficult circumstances (she remains happily a mystery, though she does say she served in Afghanistan at one point).

Rating: R, for strong bloody violence, and language throughout

Crystal leaves a mangled trail of bodies in her wake as the film progress. But lest you think it's somehow taking sides, it takes pains to let us know Crystal herself is apolitical and strictly nonpartisan -- Athena, she claims, mistakenly snatched the wrong person with a very similar name. Her flat response to the carnage all around her pointedly dispenses with anything ideological: "They're trying to kill me, I don't give a **** why." In fact, her entire demeanor echoes that deadpan. It's nothing personal, she's just going to go ahead and live, thanks, very much.

That is an essential element, as it happens, because it allows the filmmakers to have fun at everybody else's expense: One right-wing blogger who's running for his life with Crystal discovers a family of unknown dark-skin origin hiding in the railway car they sneak into, and is outraged, assuming they were planted there in order for him to have to rethink his attitude toward immigrants; there's a social media diatribe in which the wrong version of "there" is used. Meanwhile, in the liberal bunker, one killer is admonished by another, "Is that a Kimono? That's appropriation!" In short, there's plenty of mockery all the way around, except for Crystal, who seems to know better than to get involved with the interpersonal, beyond shooting people in the face a bunch.

Mind you, there isn't terribly much else, either. For all its self-created hype, it remains what it always was, a violent bit of satiric nastiness, not intended to suggest much of anything other than when it comes down to it, caring about anything to the point of stridency is stupid and will likely get you killed. In these times, the need for something sharp-witted to put our collective misery in perspective has reached emergency levels -- better to laugh bitterly than sob or rage -- but this is most assuredly not it. The best satires draw blood, this one just pours it all over the screen. 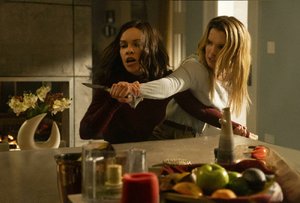