Schools across Arkansas to shut over coronavirus concerns 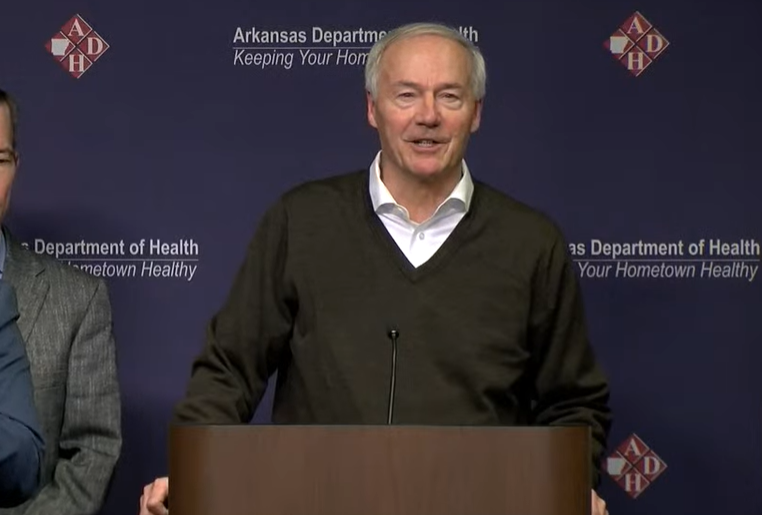 Gov. Asa Hutchinson provides an update on coronavirus in the state on Sunday afternoon in this screenshot from a live feed.

Schools across Arkansas will be closed to on-site instruction beginning Tuesday and running through spring break, Arkansas Gov. Asa Hutchinson said during a news conference Sunday.

Hutchinson said the announcement comes as a result of parents’ and educators’ “legitimate concern” over the spread of coronavirus in Arkansas.

The mandatory closures will start Tuesday, though districts statewide are authorized to begin Monday if they are prepared and willing to do so, according to the governor.

“It is a very tough call to make, because we know that students depend on so many things for their care and education in their local schools,” state Education Secretary Johnny Key said during the conference.

According to Key, some districts will require Monday to make additional arrangements, such as distributing packets and electronic devices necessary to complete coursework.

Officials will also work closely with superintendents to ensure the districts conduct routine sanitization of buildings to prepare for when students come back after spring break. They are also working to ensure meal programs continue in accordance with USDA policies, he said.

Officials also confirmed and provided new details about the latest four people in Arkansas who tested positive for coronavirus, bringing the total to 16.

The other pair of new confirmed cases were related to the initial coronavirus report at Jefferson Regional Medical Center in Pine Bluff. Neither of those patients has been hospitalized.

Officials also hope to expand Arkansas’ testing capacity tenfold by the end of next week, with the state being able to process 200 tests during the day, according to Hutchinson.

UAMS Medical Center has already accelerated its development of a test that would, with the state’s other efforts, increase the capacity to 440 tests per day across Arkansas, he said.

Also Sunday, Arkansas Attorney General Leslie Rutledge said that price gouging laws have gone into effect for the state and will last for at least 30 days.

Rutledge cited as an example a pharmacy in western Arkansas that was selling cases of water for $4. Those cases are now being sold at $8, according to the attorney general.

“We will be holding the sellers accountable for price gouging,” Rutledge said.

Every violation of price gouging, a misdemeanor, could net offenders a fine of up to $10,000. Arkansans who believe they have witnessed price gouging are encouraged to contact the attorney general’s office.

Hutchinson also discouraged the public from “panic buying” as a result of coronavirus concerns.

Grocery stores will continue to stay open, and, while stocking up on supplies that would last a “short period of time” is wise, residents don’t need to purchase several months’ worth of groceries, the governor said.

The total number of confirmed coronavirus cases in Arkansas has risen from 12 to 16, the state Department of Health website reported on Sunday.

Confirmed positive cases have so far been limited to Jefferson, Pulaski and Saline counties, according to the Health Department.

The new total comes after Arkansas Gov. Asa Hutchinson and health officials announced an increase in cases from nine to 12 on Saturday.

The agency reports 30 people were under investigation Sunday, with just under 240 people being monitored by the agency due to an identified risk.

This story was originally published at 10:06 a.m.