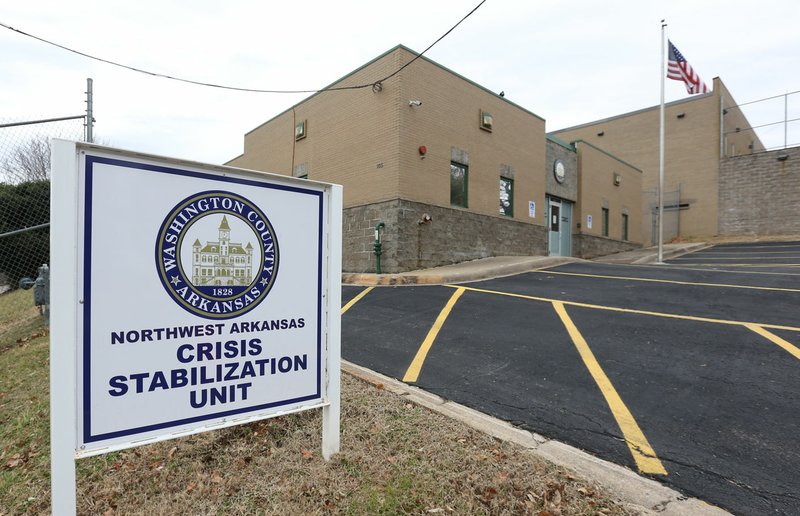 Two years after the opening of Arkansas' first crisis stabilization unit, law enforcement agencies aren't making much use of the mental-health facilities, despite those sites' promotion as a police resource.

Preliminary monthly data released through an Arkansas Freedom of Information Act request shows that fewer than 20% of total referrals to the units -- not even one of every five -- comes from a police department or sheriff's office.

In Sebastian County, about 17% of referrals to the state's first crisis stabilization unit have come from law enforcement, Department of Human Services records show. After its first month, police referrals have never made up more than 26% of its calls.

While initially hailed as a criminal justice reform tool, the numbers reveal hesitant adoption on the part of law enforcement agencies, which one facility leader said changed her expectations.

"We did not expect the numbers to go the way they have," said Joey Potts, director of the Five West Crisis Stabilization Unit in Fort Smith. "Our hope was that ... we would see a lot more referrals from the law enforcement angle."

"It's still a new concept out there," said Karl Sorrells, an officer with the North Little Rock Police Department.

"Most officers tend to think that if they get in that situation [on a mental health call], the person's going to need to go to the hospital."

A move to open crisis stabilization units in Arkansas began with Act 423 of 2017, a criminal justice changes package that created a framework to set up the facilities and initiate crisis intervention training for police.

The legislation aimed to curb Arkansas' swelling prison population, which had the nation's fastest rate of growth between 2012 and 2015, according to a Council of State Governments report.

"Many of us know of a person who endlessly cycles through arrest, conviction and jail, and no one recognizes or addresses the underlying problem," Gov. Asa Hutchinson said in an address in September, when the most recent unit opened.

Crisis stabilization units "will allow us to break that cycle for many."

But as the units have opened, most of their traffic has come from health service providers, namely community mental health centers and emergency departments.

That's remained true even as referrals have increased. In September 2019, a month of high admissions, just 20 of 141 total referrals to the Pulaski County crisis stabilization unit came from police or sheriff's deputies, records show.

As defined by data sets maintained by the state, a referral is a request for an in-person assessment at the crisis stabilization unit for consideration for possible admission.

Officers, deputies and staff members at nine law enforcement agencies around Arkansas largely praised the existence of the crisis stabilization units, but said there is no one single reason for the tepid referral pattern.

At the Fort Smith Police Department, field operations commander Capt. Daniel Grubbs says there is nothing that he can think of for why there is low law-enforcement referrals to the units. He cited 137 referrals made by his department in 2019.

He attributed it to the units becoming better-known among other providers and the public, saying he thinks people are referring themselves or family members to the site.

"Civilians, instead of calling the police, they're calling the guidance center and referring them to the CSU," he said. (Self-referrals aren't specifically tracked by the state.)

Some officers pointed to the voluntary nature of the crisis stabilization unit, saying they can't force someone to go to the facility.

"A lot of these people don't want to voluntarily use that stuff," said Jimmy Damante, chief deputy in the Crawford County sheriff's office. "It's hard dealing with the mentally ill."

Officers also cited perceived restrictions on who can become a patient at the crisis stabilization units, which don't use physical or chemical restraints on patients.

"As long as they aren't suicidal, homicidal or violent, they can go to [the] CSU. But if they are any of those three things ... then we have to take them straight to an [emergency department]," said Kelly Morris, a patrol officer with the Little Rock Police Department.

But those standards have many "gray areas," said Lisa Evans, director of the Pulaski County Regional Crisis Stabilization Unit. For example, it's common for someone with mental health issues to have had passive suicidal thoughts, though they may not actively be trying to hurt themselves.

Unit leaders said the data doesn't show a full picture of interactions with law enforcement, such as when a police officer takes someone to an emergency room who later arrives in the crisis stabilization unit.

But in general, mental health providers and law enforcement officers are "not used to working that closely together," Evans said.

She has worked to increase usage by officers and anticipates a "slow build," adding that units in other states had similar experiences when first starting.

"I'm hopeful that once everybody kind of slows down and has time to kind of analyze their policies for what might be contributing to the flat-line of officer referrals, it'll start to make a difference," she said.

It's hard to sort out if there is a bottleneck in an individual law enforcement agency's use of the unit. Several told the Arkansas Democrat-Gazette that they don't specifically track that data in an easily referenced way.

Others had few interactions to report. Responding to an interview request in February, a Jonesboro Police Department spokeswoman said the agency did not have any officers who had yet taken someone to the Craighead County site, which opened in September.

Told about the current numbers, a few members of law enforcement agencies said they thought it would take more time to better train officers and build a practice of using the units.

"You're always going to have some people who are resistant to change," said Capt. Theodore Haase of the Pulaski County sheriff's office. "It doesn't matter if you're teaching crisis intervention, field training, defensive tactics. Anything you try to change -- or show someone a new way of doing things -- you're going to have that small percentage that is resistant."

Several said movement within police departments, such as people being reassigned to the detective division, eats into the number of people with crisis intervention training who are working on the streets.

"I also believe that from my experience that many patients are resistant to help or approach by law enforcement, in large part because in the past that was most likely a negative overall experience," Sgt. John Murphy of the Sherwood Police Department wrote in an email.

"Not necessarily that they were treated badly, but that law enforcement had few if any alternatives for treatment other than incarceration."

People with mental illness sometimes don't think they have a problem, Sorrells said, but also become afraid that if they go to the crisis stabilization unit they won't be able to leave.

"We also have a rather large transient population that does not think we're looking out for their best interest -- that we're just trying to take them and put them away in a hospital forever. And that's not our goal."

One exception to the trend of little law enforcement referrals is at the Northwest Arkansas Crisis Stabilization Unit, where around 40% of referrals come from nearby law enforcement agencies -- the highest percentage in the state.

Sgt. Tony Murphy in the community-oriented policing division of the Fayetteville Police Department said his agency "really pushes" use of the crisis stabilization unit.

"We know a lot of these people by first-name basis because we come in contact with them quite often," he said.

While officers are not sending "wave after wave there, filling that place to the rafters," Sorrells said the unit in Pulaski County is a needed resource for the community.

He recalled an elderly woman found sleeping behind a building, whom he said was among the first to go to the site.

"What's the number you're looking for, to where you say it's worthwhile?" he said. "Those of us in the weeds, we know that the need is still there."

While less-frequent use of the facilities by police officers and deputies undermines an early narrative, officials and their representatives said the providers are serving their intended purpose.

In January, a spokeswoman for Gov. Asa Hutchinson wrote in an email that the units are a "pilot project" for which a learning curve is expected.

"The use of CSUs is a complete departure of how law enforcement has engaged with our population of people in mental health crisis and there is no surprise that it takes some time to change the status quo," wrote the spokeswoman, Katie Beck.

Still, "it is essential that all sheriffs and chiefs of police within CSU catchment areas embrace this new concept and encourage the CSU utilization down to their officers that are out in communities," she wrote.

Former state Rep. Clarke Tucker, who co-sponsored the original legislation for the units, says he continues to follow the issue and shares the view that the Arkansas experience is similar to what's been seen in other states.

"It's just a multilayer complicated process that I think takes several years to get fully integrated into the system, the way we had envisioned," he said.

"There seems to have been a lot of confusion as to who can refer to the units, and the criteria to be admitted," he wrote in an email.

"What law enforcement agencies are telling me is that when they take someone over to a CSU they have to wait, and many times after a long wait they are ... told that the person is not appropriate for the unit."

Overall, there is a feeling of support for the project, said Kimberley Boyette, emergency services director for Mid-South Health Systems, which runs the Craighead County site.

"From grassroots [groups], all the way up to the governor's office, people want this -- these officers, they do use us," she said.

"I may be the only mental health lady they know that they can call. ... I know it's a new thing for the state."

Near San Antonio -- an area Arkansas looked to as a model for its units -- David Pan of the Center for Health Care Services said every Bexar County law enforcement officer went through 40-hour crisis intervention training.

Arkansas is behind that, with about 600 officers having gone through the full course, according to Beck. Officers said the cost and time commitment to training has been tough for some smaller agencies to bear.

Bexar County has streamlined its referrals by training officers to contact a central dispatch that helps locate crisis beds when they're needed, Pan said. They also check on "frequent fliers" regularly, rather than waiting for an encounter.

In Madison County, Tenn., which is among 10 sites that received national recognition for criminal justice work related to mental-health issues, Tennessee Bureau of Investigation Agent Cathy Ferguson described the issue as one that's related in part to generational change on the force.

"You didn't teach years ago that there was another way to solve a problem" other than an arrest, she said. "It's a different mindset."

Part of crisis intervention training, she added, is learning "really how to sweet talk" someone into going to a stabilization unit and being prepared with other resources such as lists of community partners if people decline to go.

Evans, the Pulaski County unit director, said another opportunity for training is helping officers identify what is a genuine medical emergency and what could probably be handled by the short-term acute psychiatric facilities.

For example, she said, officers still reflexively call an ambulance in instances that involve substance use, while every situation may not merit that.

Some of what's going on is probably "just habit," she said.

"[It requires] a culture change. Officers are doing what they were trained to do: arrest people and take them to jail," she said. "They have not changed their behavior yet." 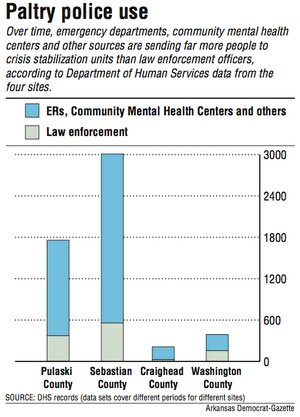