'We're trying to do what we can': Rock Town Distillery makes hand sanitizer amid coronavirus 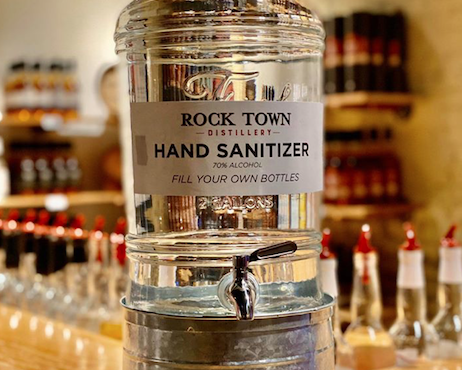 It took about 24 hours for Rock Town Distillery to create its own hand sanitizer but only 10 minutes to run out when it offered the first two gallons for free to the public Wednesday afternoon.

About 100 more gallons are now on the way, manager Macie Fellows said, with plans to continue offering it for free while supplies last.

“It’s one thing we can offer here,” Fellows said. “We’re trying to do what we can to help out.”

Fellows said owner Phil Brandon was contacted by U.S. Rep. French Hill’s office Tuesday asking if the distillery would be able to make hand sanitizer. Stores have been selling out of the product for days as the new coronavirus spreads across the country.

Fellows said Brandon developed a recipe and made two gallons, which were put out at 2 p.m. Wednesday and emptied shortly later. More sanitizer was to be prepared for the public Wednesday, Fellows said, but individuals are limited to 200 milliliters each per day while supplies last.

The sanitizer is 70% alcohol, Fellows said, above the 60% alcohol threshold needed to be considered useful against the virus.

About 100 gallons of sanitizer is all the distillery has supplies for now, Fellows said.

To make the sanitizer, Fellows said it uses alcohol from its vodka-making process. At one stage, the liquor is basically grain alcohol, about 190 proof.

Instead of taking all the alcohol and turning it into vodka, which is 80 proof, Fellows said some has been diverted for use in the sanitizer.

Fellows said there is still plenty of vodka for sale, and the taproom is still open, though tours have stopped to avoid gathering large groups in small areas.

The distillery is encouraging people to pick up liquor to drink at home if they’re practicing social distancing.