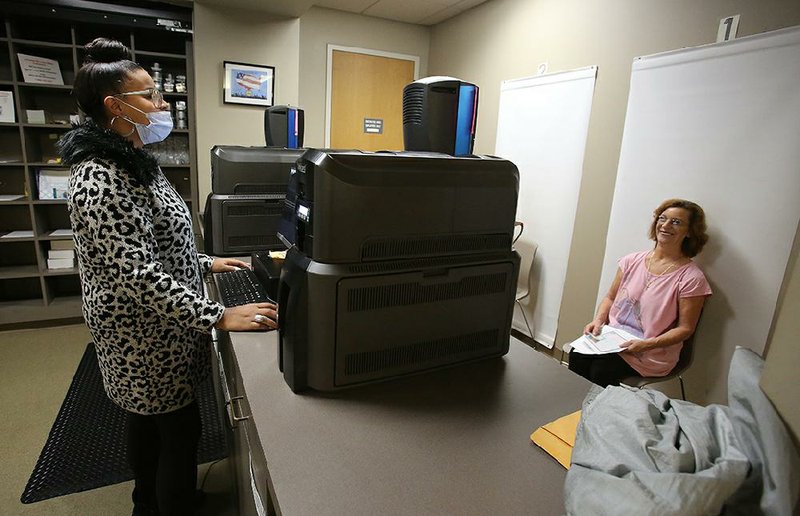 Lisa Norwood (left) takes a driver’s license photo Wednesday for Jamie Easton of North Little Rock at the Central Revenue Office in Little Rock. The Department of Finance and Administration is keeping most revenue offices across the state open but is stressing that many of the services are online. (Arkansas Democrat-Gazette/Thomas Metthe)

The spread of the coronavirus in Arkansas, as of Wednesday, won't stop people from registering vehicles at a state revenue office, but student drivers will be left waiting for licenses if they have not taken their road skills test.

Likewise, concealed-carry permit applications are still being processed by the Arkansas State Police.

And incorporation filings are being turned in to the secretary of state's office either online or in bins placed outside its Little Rock offices -- both to avoid human contact.

At Lake Chicot State Park, visitors can still rent kayaks for a day on the water, but prospectors at Crater of Diamonds State Park near Murfreesboro are being told to provide their own equipment rather than using the park's for a fee.

By declaring a public-health emergency, Hutchinson authorized his Cabinet secretaries to allow state employees who have the ability to work remotely to do so. State employees who cannot, such as road work crews, are continuing to report to their jobs.

Some agencies, such as the Department of Human Services, are encouraging people eligible to receive benefits to apply online, rather than show up in person. The state is also temporarily waiving its work requirement for recipients of the Supplemental Nutrition Assistance Program, or food stamps.

The Department of Finance and Administration is keeping revenue offices across the state open, except for about a dozen that are located in county courthouses closed by local officials, according to agency spokesman Scott Hardin.

The department, which handles an array of services such as tax collection, vehicle registration and license renewals, is using concerns about public health to advertise that many of those services have been made available online in recent years.

For the time being, residents who do show up at revenue offices are not being made to practice social distancing measures such as standing several feet apart in line, Hardin said.

As of Wednesday, income tax filings are still due on April 15, Hardin said.

However, state officials are considering extending the deadline if the Internal Revenue Service extends the national deadline to file as it has the due date for tax payments.

"As we must first determine the potential impact to the state budget and services, we have not made a decision regarding a payment extension of any length for state taxes," Hardin said in an email.

There's one service at the Department of Finance and Administration that can't be handled online: The issuance of first-time licenses to new drivers or those who have moved from out of state. Those services must be done in person at revenue offices.

New drivers are also are testing limitations announced by the state police Tuesday. Bill Sadler, a state police spokesman, said that because of the closure of many local government buildings, the written test for permit applicants will be administered only at most local troop headquarters and the Driving Testing Center in Russellville until March 27.

All road skills tests for conventional license applicants also will be halted until that time. (Applicants for a commercial driver's license can still receive testing.)

Sadler said the state police will continue processing background checks and applications for concealed carry licenses at its headquarters in Little Rock.

Among the state services least affected by the coronavirus threat are those that operate largely outside.

The Arkansas Game and Fish Commission is still issuing hunting and fishing licenses, a spokesman said, and its biologists and wildlife officers remain in the field.

"We're encouraging people to get outside, use our hiking trails, our water trails," said Keith Stephens, the Game and Fish spokesman. "That's something you can do while social distancing."

The Game and Fish Commission has closed its education and nature centers. Stephens said the virus is not expected to affect turkey hunting season, which begins April 13.

All 52 state parks remain open, albeit with some limited services.

Scheduled events at state parks -- including guided tours, workshops and day camps -- have been canceled through May 13, according to a notice post on the department's website.

But most facilities -- including campgrounds, cabins, restrooms, marinas and museums -- remain open to the public.

At Crater of Diamonds State Park, the 37-acre diamond search area is now limited to 500 visitors at a time. The park staff has stopped renting mining equipment out of concern about keeping the tools disinfected

For constitutional offices in the state Capitol, which closed to the public last week, public services are being offered remotely, from other offices or in some cases, shuttered for the time being.

The secretary of state's office, meanwhile, is accepting business and corporation filings online or in baskets set up outside its offices at the nearby Victory Building, which remains open to the public.

"We're kind of on a skeleton crew right now," said Kevin Niehaus, a spokesman for Secretary of State John Thurston.

Commission of State Lands Tommy Lands' office has ceased staff travel until further notice, forcing the cancellation of 40 auctions that had been scheduled into June.

Nikki Heck, a spokeswoman for the land commissioner's office, said taxes due to the office can still be paid online, and offers can still be submitted to purchase properties that have not sold at previous auctions.