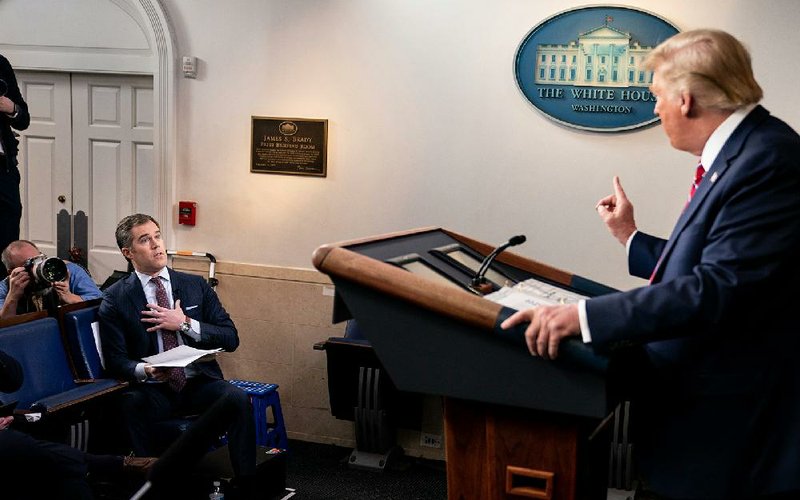 WASHINGTON -- Defending his handling of the coronavirus pandemic, President Donald Trump on Friday reprimanded reporters and broke with health officials on the science of the outbreak.

Trump said he was tapping the Defense Production Act to order American businesses to manufacture and send supplies -- such as testing kits, ventilators and masks -- to hospitals preparing to be overwhelmed by a wave of coronavirus cases. He did not specify which companies he was marshaling for the effort. Trump had said earlier in the week that he would tap the act as needed; he said Friday that he has put that "in gear."

The president also announced an effective closure of the border with Mexico, prohibiting most travel except for trade. That brings it in line with the restriction on the Canadian border earlier in the week.

The U.S. is also suspending interest on student loans to help young people cope with job losses and the financial crunch. Trump also said the Education Department will not enforce standardized testing requirements for students in elementary through high school for the current year. Under federal education law, states are required to administer standardized tests every school year.

In announcing the decision to lift those requirements, Trump said students have already "been through a lot" this year.

New guidance from the Education Department says any state that submits a "proper request" will be granted a testing waiver for the 2019-20 school year. The agency said states can begin canceling tests now if they decide it's necessary as a safety measure.

Trump and Fauci broke openly during Friday's White House briefing on the possible effectiveness of new drugs being explored to treat the virus. Trump said he believed that a combination of medications he announced Thursday would work. Fauci said no such declaration could be made without testing.

[Video not showing up above? Click here to watch » https://www.youtube.com/watch?v=yYhriqvJMSw]

Reporters asked both men if a malaria drug called hydroxychloroquine could be used to prevent covid-19, the disease caused by the virus. A day earlier, when Fauci wasn't with him at that briefing, Trump had called attention to the drug.

On Friday, Fauci took the reporter's question and got right to the point. "No," he said. "The answer ... is no. The information that you're referring to specifically is anecdotal," Fauci said. "It was not done in a controlled clinical trial, so you really can't make any definitive statement about it."

He went on to explain that the Food and Drug Administration is looking for a way to make the drug available for emergency use, but in a manner that gives the government data about whether it's safe and effective.

Trump said he disagreed with the notion that there is no magic drug for the coronavirus disease. "Maybe there is, maybe there isn't. We have to see," he said.

He struck an upbeat note, while trying not to directly challenge Fauci.

"I think without seeing too much, I'm probably more of a fan of that," he said, referring to the malaria drug. "And we all understand what the doctor said is 100% correct."

Hydroxychloroquine and a similar drug -- chloroquine -- are sold around the world under a variety of brand and generic names. They may interfere with the coronavirus being able to enter cells, and some scientists have reported possible encouraging signs in test-tube and other small studies.

Fauci stepped up to the podium Friday to say he's not ruling the drug out, but that it must be studied before making any promises.

The two debated even the safety of the malaria drug, with Trump saying it has a proven record and Fauci cautioning that it must be validated again for coronavirus disease.

"You know, I'm not dismissing it at all, and I hope that that interpretation wasn't widespread," Fauci said later on Fox News. "What I said is that we don't have definitive proof that it works."

The president also sparred with reporters he deemed overly critical of the response.

Trump scoffed at questions about continued testing shortfalls and deficiencies in medical supplies, suggesting that even mentioning the issues was problematic. When asked to speak directly to those marooned at home and frightened, Trump voiced objection to the question itself.

"I say that you're a terrible reporter," Trump responded.

Vice President Mike Pence, when asked the same question later in the briefing, responded, "Don't be afraid, be vigilant."

More than 200 people have died from covid-19 in the U.S. and sickness from the disease is on the rise, with hospitals at risk of being overrun.

And now, just as the federal government tries to ramp up nationwide screening, laboratory workers are warning of a new roadblock -- dire shortages of testing supplies.

There are "acute, serious shortages across the board" for supplies needed to do the tests, said Eric Blank of the Association of Public Health Laboratories, which represents state and local health labs.

Late on Friday, Blank's group and two other public health organizations recommended that testing be scaled back because of "real, immediate, wide-scale shortages." The groups said only patients with covid-19 symptoms who are elderly, have high-risk medical conditions or are medical staff should be tested.

Public health experts stress that policymakers are "flying blind" in deciding how to manage the pandemic.

"The only way to get through it without testing is to keep the entire country quarantined for the next 18 months" said Dr. Ashish Jha, a Harvard University global health professor. "That obviously is untenable."

Senate Democratic leader Charles Schumer said he implored Trump in a phone call Friday to invoke the Korean War-era act immediately to order the manufacture of ventilators and other critically needed medical gear. The president told Schumer he would, and then could be heard on the phone shouting to someone in his office to do it now, said Schumer's spokesman, Justin Goodman.

Later at the briefing, Trump said he had actually activated the measure Thursday night. He declined to reveal any companies he had ordered to step up production, though, he said, "You know, so far, we haven't had to" because companies are volunteering.

The president and the Cabinet officials who briefed reporters focused on the border as they moved to restrict the entry of people without documentation. This follows a stepped-up State Department travel advisory telling Americans they should not leave the country.

"Americans from every walk of life are coming together," Trump said. "We are winning, and we are going to win this war."

The administration is trying to provide the needed masks, ventilators and other supplies to hospitals on the verge of being overwhelmed by coronavirus patients. Already doctors and nurses have been making desperate public pleas. And numerous local officials, including New York City Mayor Bill de Blasio, have warned that their medical facilities will shortly run out of vital supplies, endangering both patients and health care workers.