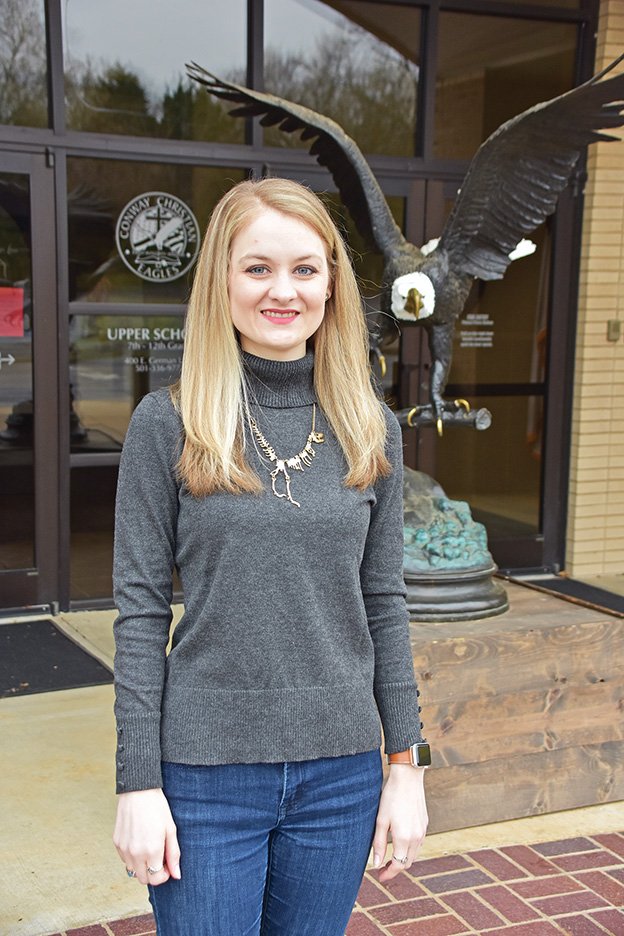 Claire Summers, a history teacher at the Conway Christian Upper School, was one of the teachers honored at the 35th annual Golden Apple Awards by the Conway Noon Lions Club on Feb. 25. ( Staci Vandagriff)

“Teaching wasn’t originally a plan of mine, but it’s almost in my genetics,” Summers said. “My mom, my aunt and both of their parents were all high school teachers.

“My dad is now a professor, so it runs in the family. I’ve had some phenomenal teachers throughout my educational career, both in high school and in college, and I definitely still feel their influence when I’m teaching.”

Summers was one of the teachers recently honored at the 35th annual Golden Apple Awards by the Conway Noon Lions Club. Summers teaches history at the Conway Christian Upper School.

“I was really pleased to be selected for the award, especially since now that I’m in my fourth year teaching, I finally feel like I know what I’m doing,” she said. “I was a little surprised to hear about it, since I didn’t know the selection process had already happened.

“I’m incredibly flattered by the honor, and I hope I can live up to it in the future.”

Summers said her most significant influence is definitely her mom.

“She home-schooled my sister and me when we were in elementary school, and she taught at Conway Christian School while I was in high school and is absolutely one of the best teachers I’ve ever had,” Summers said.

Summers said a series of unplanned circumstances just sort of lined up after she graduated from college that led to her getting her teaching license and accepting a job at Conway Christian.

“To be frank, I had no idea if I would even like teaching, but it’s turned out to be a tremendous blessing for me, especially teaching at my alma mater,” Summers said. “It’s been so fun to be back in the environment that meant so much to me as a student, and the mission of the school is something that means a lot to me.

When she was ready to start seventh grade, Summers and her sister, after being home-schooled, enrolled at Conway Christian. She graduated from CCS in 2011 and was a National Merit Finalist that year.

“Claire is a tireless learner,” said Josh Harrison, principal of Conway Christian Upper School. “She spreads her passion for history with each of the students who come into her room.

“She provides opportunities for class discussion and debate, keeping her classroom invigorating and allowing the learning of her students to ebb and flow naturally.”

Harrison said Summers has an amazing rapport with her students, and they respond well to her teaching style.

“I love being around my students, and I feel like we generally have a very good relationship,” Summers said. “Being younger probably helps to an extent, but I do just genuinely enjoy their energy and perspective, even if I’m exhausted when I go home.

“I do my best to keep them interested, but of course, that isn’t always possible. I try to keep the classroom environment fun and welcoming so that even if they aren’t particularly interested in history, hopefully, they still feel comfortable in my room.”

Before class was canceled because of concerns over the coronavirus, Summers was running a March Madness bracket in her classroom titled Historical Hotties.

“The hardest thing about teaching for me is finding the appropriate balance between discipline and grace,” Summers said. “I’m a very organized, structured thinker, so it’s taken a while for me to accept the fact that I simply have to treat every disciplinary situation on a case-by-case basis — there is no one-size-fits-all solution to classroom management.

“Of course, consistency is very important to me, but I’ve had to learn through a lot of trial and error that simply having a conversation with a student is often significantly more effective than a blanket rule policy and usually goes a long way toward helping to preserve the relationship with that student.”

Summers graduated from Harding University in 2015 with a bachelor’s degree in history and spent the next two years earning her Master of Arts in Teaching degree so she could be certified. This is her fourth year teaching, all at Conway Christian.

“I chose to study history, not just because it’s fascinating to me, but because I believe it is fundamentally one of the most important things for us to study as citizens of the world,” Summers said. “Yes, it’s a collection of super interesting stories about queens who built ice palaces and Emu Wars, but it’s also the single best way for us, as a society, to understand where we came from, what our past triumphs and burdens are and what those mean to us today, and how we can do our best to grow and improve and learn.

“Above everything else, I think history teaches us empathy — the ability to put ourselves in someone else’s shoes and try to understand why they are the way they are and why we are the way we are.”

Summers said working at Conway Christian means that faith is integrated into all of the classrooms, although that looks different in each classroom.

“There’s the aspect of content integration, which for me primarily means analyzing historical developments and ideologies from a biblical perspective,” Summers said. “Sometimes this involves really difficult conversations.”

She said, for example, “How do we address the fact that Southerners used biblical justifications for slavery? Or how should Christians view the American decision to use atomic weapons in World War II?”

“For me, that adds a lot to my classes, and it’s an important part of viewing teaching as discipleship. It does affect the way I relate to students as well.

“I do the best I can to provide an example for them, not just of good citizenship, but also of Christian worldview and lifestyle.”

“Mrs. Summers is a very intelligent, quick-witted individual,” Harrison said. “Being young, she is in the know with a lot of what is going in the current media. She also has an old soul in her appreciation for other cultures and time periods.”

Summer is pursuing a master’s degree in history at the University of Central Arkansas in Conway that, when completed, will allow her to teach concurrent-credit classes.

“I have no plans to become an administrator, and I have seriously considered working on a Ph.D. and moving on to the college level, but that’s a long way down the road,” she said.

“Claire is a wealth of knowledge and an amazing member of the staff here at CCS,” Harrison said. “Claire also serves as the senior high sponsor for the Quiz Bowl and coached the women’s bowling team at CCS.

“Mrs. Summers was recently named as the local [Veterans of Foreign Wars] Teacher of the Year. We are blessed and honored to have Claire Summers as a staff member here at Conway Christian School, and we are so proud that she has been chosen to receive this award.”