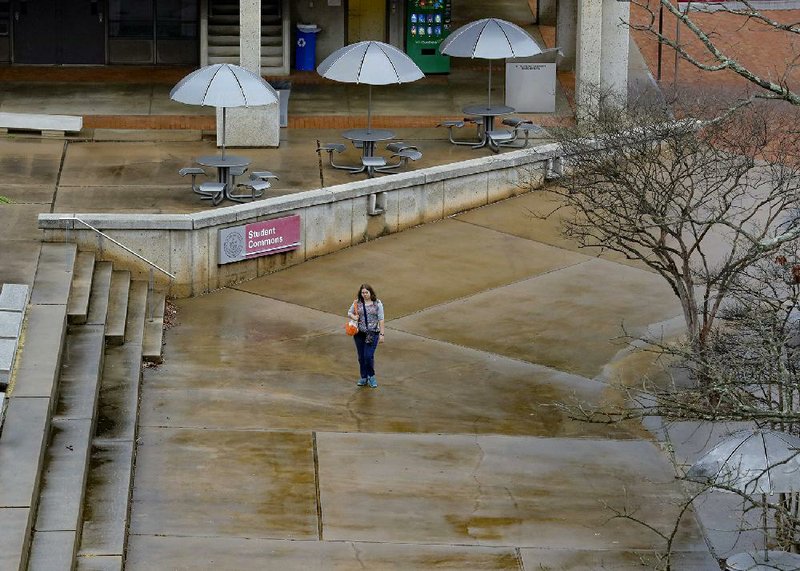 A proposal allowing University of Arkansas at Little Rock students to request Credit/No Credit grades for their spring courses is supported by the university's chancellor and expected to be approved, a university spokesman said Monday.

The university, in providing "initial" information about the change Monday on its website, cited the disruption to college life caused by the covid-19 outbreak as a reason to give "more flexibility for students who are worried about maintaining their GPAs during this challenging semester."

Among other large universities in the state, the University of Arkansas, Fayetteville and Arkansas Tech University are considering changes to their grading this spring but have not taken action, according to statements provided Monday to the Democrat-Gazette.

But some state schools elsewhere, including the University of North Carolina, have said they are expanding pass/fail grading options for students.

UALR, like other colleges and universities in the state, has shifted to remote instruction and online-only classes. Colleges varied in when they made the switch, with UALR on March 12 announcing an immediate suspension of in-person classes and a shift to online-only classes.

The proposal to change grading at UALR comes about through "emergency legislation" passed Friday by the university's faculty senate.

The "initial" information provided by UALR states that "not all instructors will offer CR/NC final grades for various reasons, and some programs that lead to licensure (e.g., nursing) will also not be able to offer this option."

But the change would temporarily loosen the university's regular grading policy, which states that a student and instructor must agree at the beginning of the term for a course to be graded "CR/NC" and also imposes a one-course limit on the number of such grades that can be given to a student per semester.

At UALR, "many of our students make great sacrifices to complete their degrees and improve their lives," Bain, the university's top academic officer, said in a statement.

"This public health emergency has placed even more strain on these students and their families. In light of these stressful circumstances and the additional disruption of converting all face-to-face classes to online, moving to expand the grading policy to include greater flexibility for credit-no credit options was the right thing for the faculty senate to do," Bain said.

Jessica Olson, a post-bachelor's degree student, said she was concerned at first about whether the biochemistry class she's taking -- a prerequisite for veterinary school -- would be accepted where she's applying if she doesn't receive a grade. Once she realized she could choose whether to receive one, she said she was no longer concerned.

Some -- but not all -- universities are at least discussing possible changes to how courses will be graded this spring.

"Those conversations are taking place, but no decision has been reached as of this time," Arkansas Tech University spokesman Sam Strasner said in an email.

Fran Hagstrom, chair of the UA-Fayetteville faculty senate, said the group's executive committee first began researching the issue and then held a remote meeting Wednesday, with another meeting set for later this week to discuss grading.

"Our executive group certainly has been looking at what other universities are doing," Hagstrom said, referring to changes to grading made by the University of California-Berkeley, which has set the default grading for undergraduate courses this spring to "Passed/Not Passed."

Asked when the group might decide on a course of action, "I would say no later than April 1," Hagstrom said. UA-Fayetteville began remote instruction last week and is on spring break this week.

Hagstrom said certain letter grades must be earned for some jobs that require licensure. Also, some course sequences at UA-Fayetteville require certain marks to continue on in the series, Hagstrom said.

"I didn't even realize it was going to be so complex," Hagstrom said, adding, "we want to do what's best for the most people."

She said the difficulties faced by students are being considered.

"We know it's so stressful for them, and we want to protect our faculty that are also a little stressed," Hagstrom said.

A student petition had more than 7,000 signatures as of Monday evening asking that classes be designated pass/fail at the University of Arkansas, Fayetteville.

"Some people thrive in courses online and others greatly struggle without the in class resources we had before," states the petition, started by Presley Hope.

Hagstrom said the university's administration would have to approve any grading policy changes, and said the school's top academic official, Provost Jim Coleman, had reached out to faculty about the issue.

Coleman, in a statement Monday, said, "All options are being discussed as we consider the best interests of our students and faculty." Coleman called it "a complex issue" and said "a final decision regarding any potential changes will be issued as soon as possible after Spring Break."

Not all universities in the state have said they are considering a similar change to their grading policies.

At the University of Central Arkansas -- according to Provost and Executive Vice President Patricia Poulter -- the option of moving courses to pass/fail grading "is not under consideration at this time at UCA," spokeswoman Amanda Hoelzeman said in an email.

For the University of Arkansas at Pine Bluff, the "current intent is to adhere to the regular grading system," spokeswoman Tisha Arnold said in an email.

The state's Academic Challenge Scholarship, also known as the lottery scholarship, requires college students to maintain a cumulative grade-point average of 2.5 in order to continue receiving award money, with students also required to complete a certain number of semester hours each year.

Asked if the state Division of Higher Education is considering any changes to its scholarship requirements, a spokeswoman, Alisha Lewis, said, "No decisions have been finalized although conversations are being had about how to best serve students while ensuring academic outcomes."

Information for this article was contributed by Emily Walkenhorst of the Arkansas Democrat-Gazette.