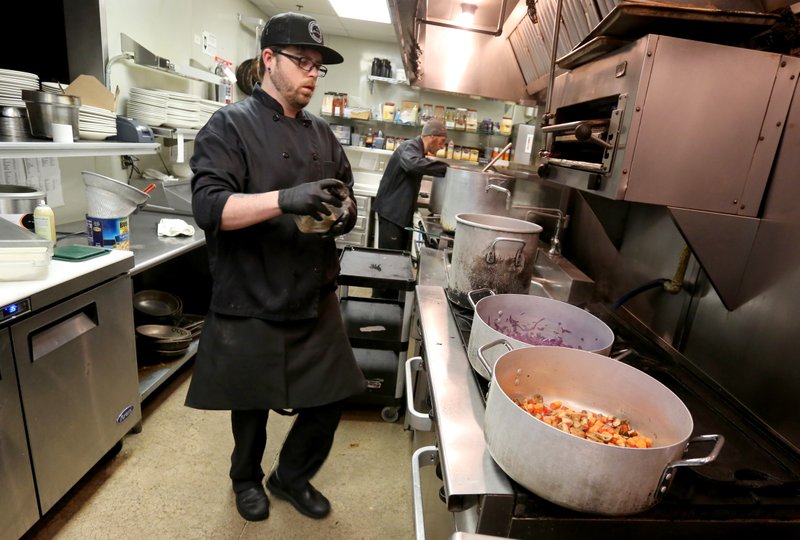 Corey McCain, executive chef at Bordinos, prepares a free family meal for laid-off employees and family members to pick up Thursday at the restaurant on Dickson Street in Fayetteville. Restaurants and bars in the city of Fayetteville are making adjustments because of the spread of covid-19. (NWA Democrat-Gazette/David Gottschalk)

Arkansas businesses will continue to face job losses and reductions in consumer spending over the remainder of the year, plunging the state into a recession and leading to an unemployment rate that will reach 8.7%, a level not seen in a decade, according to a state economic forecast.

Arkansas will follow the nation in an economic decline that will last throughout 2020 as a result of the coronavirus spread, according to the University of Arkansas at Little Rock forecast.

The study led by economist Michael Pakko said that "a recession appears inevitable" as the nation and the state experience disruptions in critical supply chains, declines in personal income and consumer spending, a major manufacturing slowdown and the shuttering of small businesses caused by the crisis.

"For the most part, this is going to be a broad downturn across the economy and across the state," Pakko said Tuesday.

Pakko's study, which can be found at arkansaseconomist.com, is one of several reports that give a glimpse of the havoc the spread of the coronavirus could have on the national and state economies.

The economy will trouble the state throughout the year, according to the report.

Payroll employment in Arkansas will drop by 77,000 jobs, a 6% decrease, over the next year, the study said. Retail employment will fall 16%, according to the study, while jobs in arts, entertainment and recreation will plummet 20% -- that means one in every five jobs will be gone.

There will be 117,500 unemployed Arkansans, leading to the 8.7% peak unemployment rate, the study said.

Commerce Secretary Mike Preston said the state is preparing for an increase in unemployment and is working to give businesses the support they need.

"We do anticipate the unemployment rate to rise significantly," Preston said. "I think any projections right now are just that, and we remain focused on keeping our economy working and the supply chain open."

"It's going to get increasingly difficult for a lot of businesses this year," Zook said. "It's going to be a pretty painful period. We've got a lot of tough decisions coming up that are facing businesses and managers."

The initial unemployment wave has already washed up: More than 10,000 applications for state unemployment coverage have been submitted just in the past week, state officials said Tuesday. The average, before the virus, was about 1,500 applications a week. State information about the virus and resources available can be found at arkansasedc.com/covid19.

In addition, Gov. Asa Hutchinson noted Monday that the state is having trouble with declining revenue. The governor's administration cut state government's general revenue budget for the current fiscal year by $353.1 million.

The governor said he isn't planning layoffs and intends to use the state's surplus to cover needs going forward. The UALR study projected state government employment to remain relatively flat this year.

But economic problems will continue to mount over the next few months. The UALR study predicts that personal income will drop with continued job losses, while benefits such as unemployment insurance will supplement income. Consumer spending will fall across the state as well, the study said.

Pakko emphasized that the forecast is only a current snapshot and could change given the uncertainty of the virus and its spread.

"There is a great deal of uncertainty associated with any forecast of the current, unprecedented situation," Pakko said. "The risk is this could be worse than what we know right now."

For example, the study noted, "declines in consumer spending and income may reinforce one another to create an even more dramatic downturn" in Arkansas.

The study uses the IHS Markit national economic forecast, which was released Friday, as the baseline for the Arkansas projections. Pakko and the team at the Arkansas Economic Development Institute layered in characteristics unique to Arkansas to build the state forecast.

"The outlook will undoubtedly change as the situation develops, particularly when it comes to the impact of fiscal and monetary policy responses," the study concluded. "At the present time, however, it appears that a dramatic downturn in economic activity over the remainder of 2020 is unavoidable for the nation and for Arkansas."

Restaurants, bars and cafes all have been forced to alter operations to enforce protective measures that slow the spread of the virus.

Those practices are leading to job losses and sales declines.

Hutchinson acknowledged at a news conference Tuesday that it's a delicate balancing act to promote economic activity while limiting the human contact that is the foundation of many businesses. "I think we're approaching it in the right way," Hutchinson said, noting that there is an ongoing evaluation of which businesses should be closed and which are essential and need to remain open.

The economic crisis will remain for some time, Hutchinson said.

"We're going to see more disruption in the near future," he said Tuesday. "I think this is going to be here for some time."

The National Federation of Independent Business reports that 76% of small businesses are experiencing economic troubles traced to the virus.

"The magnitude of disruption now on the small business sector is profound," the organization said in releasing its findings.

Another 23% said they are somewhat concerned, and 9% indicated they are slightly concerned. The organization represents small businesses nationwide with less than 360 employees.

Community Bakery, a small cafe and restaurant on the edge of downtown Little Rock, "has been severely impacted" by the virus in recent weeks, CFO Juli Brandenberger said.

"Our sales are down 50%, and we've had to reduce our production," she added. "We are fortunate to have drive-thrus at both locations, and we will continue to serve our community to the best of our ability."

Last Friday, Arkansas was declared an economic disaster area, clearing the way for small businesses like Community Bakery to apply for up to $2 million in federal assistance through the Small Business Administration.

Also last week, Hutchinson released $4 million from the quick action closing fund to provide bridge loans to small businesses that need help making payroll and covering other essential costs. Zero-interest loans are available for up to $250,000. Attorney General Leslie Rutledge contributed another $3 million to the effort.

Preston said Tuesday that his office is supporting businesses and workers fighting through the crisis. "We're helping get resources to businesses and accepting applications for the quick action loan fund the governor released last week, as well as accepting unemployment claims through workforce services," Preston said.

Little Rock Regional Chamber of Commerce President and CEO Jay Chesshir, like other state and economic development officials, said Central Arkansas and the state should strap in for a rough ride, but he's confident Arkansas will be prepared for recovery.

"An unprecedented change in our unemployment rate over the next few months is inevitable," Chesshir said. "But our economy is diverse, resilient and can bounce back quickly. In the 2007-2009 recession, this economic diversity was a major reason why our economy functioned far better than others."

That recession led to an unemployment rate above 8% across Arkansas. The state had a joblessness rate that high through mid-2011 before the recovery finally took hold in 2012.

Some forecasts have predicted an economic recovery from the virus troubles beginning near the end of the year, but Pakko cautioned about that "overly optimistic" view.

"The one thing that is certain about this recession is that we can all agree on the underlying cause -- the coronavirus and its spread," Pakko said. "The same couldn't be said of recessions in the past."