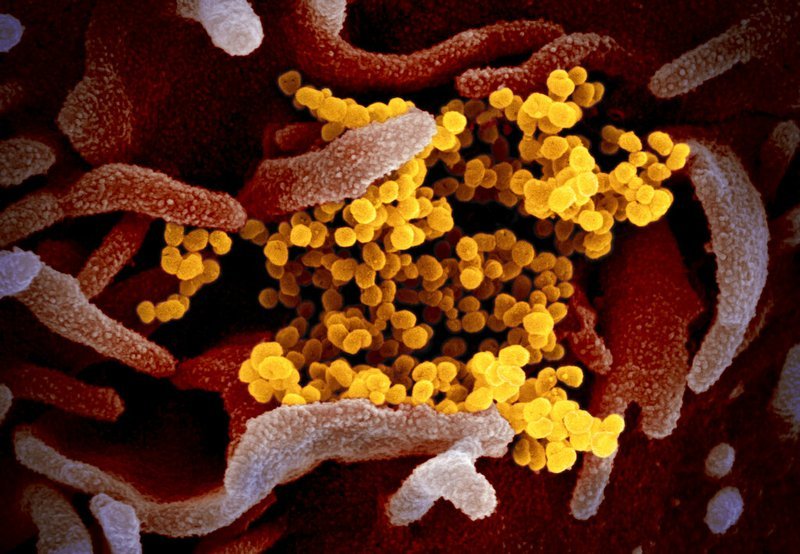 This undated electron microscope image made available by the U.S. National Institutes of Health in February 2020 shows the Novel Coronavirus SARS-CoV-2, yellow, emerging from the surface of cells, pink, cultured in the lab. Also known as 2019-nCoV, the virus causes COVID-19. The sample was isolated from a patient in the U.S. On Thursday, March 5, 2020, Tennessee's Department of Health Commissioner Lisa Piercey confirmed the state's first case of the new coronavirus. (NIAID-RML via AP)

The daughter of the third person in Arkansas to die from covid-19 has identified her father publicly as Terry Henderson, 73.

Henderson died Wednesday evening at Baptist Health Medical Center in Little Rock, according to Rhonda Henderson Mullins of the Memphis, Tenn., area. His death is the second among the members of Greers Ferry Assembly of God Church in Greers Ferry, coming after the death Tuesday of Bill Barton, a 91-year-old member of the church who was a door greeter there.

In a Facebook post Thursday, Mullins said her father thought he had the flu and "that he would just fight through it" as he's done before, and refused to see a doctor until Mark Palenske, pastor of Greers Ferry Assembly of God, tested positive for the virus. Palenske's was the first among the tests of those in the congregation to return, the pastor noted earlier this week.

Mullins shared the information about her father because she wanted others to know the danger of the virus.

"I want his death to be a wake-up call for every one of my friends and family and everyone they know," she wrote. "Please don't let his death be in vain."