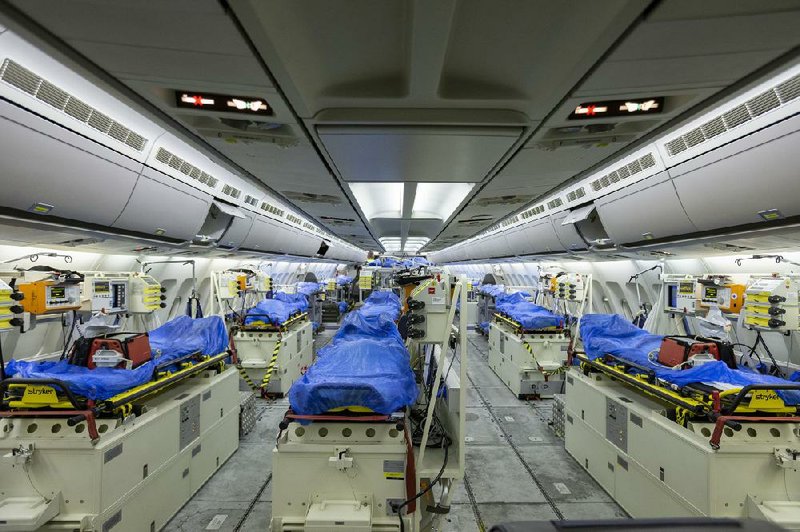 DETROIT -- The coronavirus continued its unrelenting spread across the United States, pummeling major cities like New York, Detroit, New Orleans and Chicago, where an infant who tested positive for the virus died Saturday. The contagion made its way, too, into rural America, where hot spots grew in ski havens in the Rockies and small towns in the Midwest.

Worldwide infections surpassed the 659,000 mark with more than 30,000 deaths as new cases also stacked up quickly in Europe, according to a tally by Johns Hopkins University. The U.S. leads the world in reported cases with more than 121,000, but five countries exceed its death toll of around 2,000: Italy, Spain, China, Iran and France. Italy alone now has more than 10,000 deaths, the most of any country.

Illinois Gov. J.B. Pritzker said Saturday that an infant with covid-19 died and the cause of death is under investigation. Officials didn't release other information about the infant, who was from Chicago's Cook County, including whether the child had other health issues.

"If you haven't been paying attention, maybe this is your wake-up call," said Dr. Ngozi Ezike, Illinois' health department chief.

New York remained the worst-hit U.S. city. Gov. Andrew Cuomo said defeating the virus will take "weeks and weeks and weeks." The U.N. donated 250,000 face masks to the city, and Cuomo delayed the state's presidential primary from April 28 to June 23.

Some states without known widespread infections began to try to limit exposure from visitors from their stricken neighbors.

In Rhode Island, Gov. Gina Raimondo said Friday that the state National Guard would go door to door in coastal communities to find visitors from New York and advise them about a mandatory 14-day quarantine for people from that state.

[Video not showing up above? Click here to watch » https://www.youtube.com/watch?v=b9gEED2s6nc]

Florida Gov. Ron DeSantis is ordering anyone arriving from Louisiana to self-quarantine and said law enforcement officers would set up checkpoints to screen cars from Louisiana.

Louisiana has surpassed 3,300 infections, with 137 dead from covid-19, according to health authorities there. Gov. John Bel Edwards said the region was on track to run out of ventilators by the first week of April.

Cases also have been rising rapidly in Detroit, where poverty and poor health have been problems for years. The number of infections surged to 1,381, with 31 deaths, as of noon Saturday. The city's homeless population is especially vulnerable, officials said. Michigan has more than 4,600 cases with 111 deaths.

"At this time, the trajectory of Detroit is unfortunately even more steep than that of New York," said Dr. Teena Chopra, the medical director of infection prevention and hospital epidemiology at Detroit Medical Center.

[Video not showing up above? Click here to watch » https://www.youtube.com/watch?v=2d9YHxnf9JQ]

"This is off the charts," she said.

President Donald Trump approved a major-disaster declaration for Michigan, providing money for the outbreak. He has done the same for New York, Louisiana and Illinois.

Cases in Chicago and suburban Cook County accounted for about three-fourths of Illinois' more than 3,400 total as of Saturday. Chicago Mayor Lori Lightfoot closed popular lakeshore parks after people failed to practice social distancing, despite a statewide shelter-at-home order.

The governor of Kansas also issued a stay-at-home order to begin Monday, as the virus takes hold in more rural areas where doctors worry about the lack of intensive-care beds.

The health department has already run out of personal protective equipment, Durbin said. The last supply from the federal stockpile arrived more than a week ago, and contained just 77 N95 masks and two dozen face shields.

"I wish there was a stronger word for disappointed, I'm calling on them to do better," he said of the help received from the government.

The virus also is straining health systems in Italy, Spain and France. Lockdowns of varying degrees have been introduced across Europe, nearly emptying streets in normally bustling cities.

Germany has fewer deaths than some neighboring countries but has closed nonessential shops and banned public gatherings of more than two people until April 20. It still had its share of grim news, with 12 residents of a nursing home in the northern town of Wolfsburg dying since Monday of the infection, news agency Deutsche Presse-Agentur reported.

Chancellor Angela Merkel appealed to the public for patience on Saturday.

Merkel, who is herself in home isolation after being given a vaccine by a doctor who later tested positive for the virus, underlined in her weekly podcast the importance of staying at home.

No one can say how long this time will last, but "there is still no reason to relax the rules," she said.

According to initial tests, the chancellor is not infected.

The government has issued a warning against all foreign travel.

On Saturday, Germany had more than 57,000 infections, according to Johns Hopkins University. So far, 433 people have died in the country.

Meanwhile, Italian Premier Giuseppe Conte announced that he had signed a decree freeing up $440 million for coupons and packages of food aid, to be delivered door to door if necessary.

"People are suffering psychologically. They're not used to staying in their homes. But they are also suffering economically," Conte said. Italy has almost completed a three-week lockdown, with no end in sight.

In Spain, where stay-at-home restrictions have been in place for nearly two weeks, the death toll rose to 5,826.

Another 8,000 confirmed infections pushed that count above 73,000. But Spain's director of emergencies, Fernando Simon, saw hope in that the rate of infection is slowing and figures "indicate that the outbreak is stabilizing and may be reaching its peak in some areas."

Spain is to deploy its armed forces to help transport the dead because the number is overwhelming and there are too few funeral homes, the Health Ministry said Saturday.

Prime Minister Pedro Sanchez called for a more vigorous response from the European Union. Spain, Italy, France and six other members have asked the bloc to share the burden of European debt, dubbed "coronabonds" in the media, to help fight the virus. But the idea has met resistance from other members, led by Germany and the Netherlands.

"It is the most difficult moment for the EU since its foundation and it has to be ready to rise to the challenge," Sanchez said. "

As the epicenter has shifted westward, the situation has calmed in China, where some restrictions have been lifted. Some subway service was restored in Wuhan, where the virus first emerged in December, after the city of 11 million had its virus risk evaluation reduced from high to medium.

For most people, the coronavirus causes mild or moderate symptoms, such as fever and cough that clear up in two to three weeks. But for others, especially older adults and people with existing health problems, the virus can cause more severe illness, including pneumonia, and lead to death.

More than 139,000 people have recovered, according to Johns Hopkins.

Countries are still trying to get their citizens home from abroad. On Saturday, 174 foreign tourists and four Nepalis in the foothills of Mount Everest were flown out days after being stranded at the only airstrip serving the world's highest mountain.

Indian authorities sent buses to the outskirts of New Delhi to meet an exodus of migrant workers desperately trying to reach their home villages as the world's largest lockdown put millions out of work.

India's Finance Ministry announced a $22 billion economic stimulus package that will include delivering grains and lentil rations for three months to 800 million people, around 60% of the world's second-most populous country.

Russian Prime Minister Mikhail Mishustin ordered his country's borders fully closed as of Monday, exempting diplomats as well as residents of the exclave of the Kaliningrad region.

Health officials on Saturday reported 228 new cases of coronavirus overnight, raisinging the total to 1,264, with four deaths attributed to the illness.

Moscow's mayor shut all nonessential business on Saturday and recommended everyone remain at home to reduce contagion. Russia halted all international flights on Friday and Mishustin called on regions to close most businesses, while stopping short of ordering them to do so.

In the Mideast, China sent a plane loaded with medical personnel and supplies Saturday to help Pakistan fight the spread of the coronavirus in one of the world's most populous nations.

In Iran, which is battling the worst outbreak in the region, state TV said Saturday that another 139 people had died from the virus. That pushed fatalities in Iran to 2,517 out of 35,408 confirmed cases.

Meanwhile, Australian authorities pressed ahead Saturday with plans to fly 800 cruise ship passengers to Germany this weekend after a downward revision in the number of people on board who needed to be tested for the virus.

Plans had been put in place to fly the European passengers to Germany from the Western Australia state capital, Perth, near where the ship, the Artania, is docked at the port of Fremantle.

Australia had 3,635 confirmed cases of covid-19 as of Saturday afternoon, with a steep rise of 469 new cases in 24 hours.

Some areas reported violence in response to virus prevention.

In Africa, police fired tear gas at a crowd of Kenyan ferry commuters as the country's first day of a coronavirus curfew slid into chaos. Elsewhere, officers were captured in mobile phone footage beating people with batons as

countries imposed lockdowns and curfews or sealed off major cities. Cases across Africa were set to climb above 4,000 late Saturday.

Minutes after South Africa's three-week lockdown began Friday, police screamed at homeless people in downtown Johannesburg and went after some with batons. Some citizens reported that the police used rubber bullets. Fifty-five people across the country were arrested.

In Rwanda, the first country in sub-Saharan Africa to impose a lockdown, police have denied that two civilians shot dead Monday were killed for defying the new measures, saying the men attacked an officer after being stopped.

And Zimbabwe, where police are widely criticized by human-rights groups for deadly crackdowns, is set to enter a three-week lockdown on Monday. The country's handful of virus cases already threatens to overwhelm one of the world's most fragile health systems.