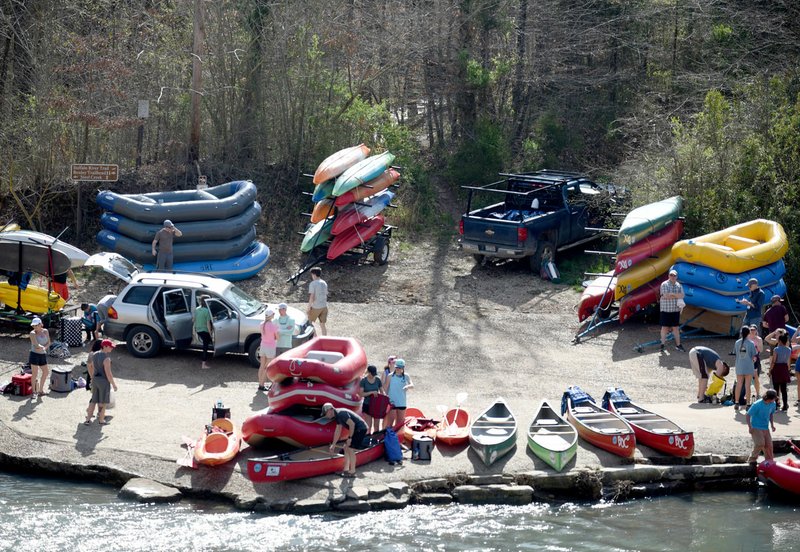 Outfitters and private boaters stage Thursday as they prepare to put on the Buffalo River from the low water bridge in Ponca. Go to nwaonline.com/200329Daily/ and nwadg.com/photos for a photo gallery. (NWA Democrat-Gazette/David Gottschalk)

The largest Buffalo National River resort has closed for a month because of overcrowding in the national park.

"People aren't respecting the social distancing," said Austin Albers, co-owner of the Buffalo Outdoor Center in Ponca. "People are flooding the area in droves and honestly freaking out the local community."

Guidance from federal and state government is that people should remain 6 feet apart in an effort to stop the spread of covid-19.

Albers said there have been hundreds of cars parked at some trail heads, and the license plates indicate they've come from all over the country.

"It's not your typical tourists," said state Rep. Keith Slape, R-Compton. "They are from Nevada, New York and New Jersey. Looking for a place to hide out until it blows through. Locals can't get groceries for tourists buying it up. They are also concerned that the virus may be brought in to them."

Melissa Cleveland started a petition drive on Change.org called "Prohibit visitors from Buffalo River/trails/parks due to Covid 19." It had 2,937 signatures as of Monday evening.

"Due to the restrictions regarding social distancing in an attempt to stop the spread of Covid 19, visitors are taking to the Buffalo River and surrounding trails at the suggestion of state leaders to 'get out and enjoy the outdoors,'" according to the petition.

But the trails have been too crowded, and that's putting the local community at risk, wrote Cleveland.

"We are calling upon Gov. Asa Hutchinson to stop telling people to visit, and to stop crowding the river and parks in a feeble attempt at social distancing," according to the petition. "We need to be shut down to all visitors if we want to stop the spread of this virus."

"We are reviewing each day any additional steps we should take in terms of protecting Arkansans from the spread of covid-19," Hutchinson said. "State Parks have closed the lodges and we have taken steps to reduce areas of public gatherings."

Hutchinson said Dr. Nate Smith, director of the Arkansas Department of Health, reiterated on Monday that "as long as social distancing is practiced then it is acceptable to enjoy a hike or otherwise enjoy the outdoors."

"As to the status of the Buffalo River, the actual authority is with the National Park Service and we will continue to coordinate with them on enforcing the president's directive," said Hutchinson.

Mark Foust, superintendent of the Buffalo National River, couldn't be reached for comment on Monday.

On Friday, the Buffalo National River announced that overnight stays in designated park campgrounds would cease as of Monday. The campgrounds have been temporarily transitioned to day use only. There are other restrictions in the park, and some visitors centers are closed due to the coronavirus pandemic.

Jamie Mefford, a Newton County justice of the peace, said he talked with Warren Campbell, county judge of Newton County, about the overcrowding.

"We were going to try to shut the county down if we have the power to do so, but we don't," said Mefford. "We would love it if the governor would tell people to stop coming here."

Mefford said it was rainy on Saturday so things slowed down a little, but the crowds were bigger on Sunday.

He said that at any given time on Sunday there were 1,000 people total gathered at three trail heads -- Whitaker Point, Fire Tower Road and Lost Valley.

"These people are coming from hot spots and coming here," said Mefford.

On Monday, Newton County got its first positive test result for covid-19, according to the state map at https://bit.ly/3dGn95w

Leisa Milam of Newton County, an art teacher, said the trails are too narrow for people to practice the recommended 6 feet of social distancing.

"I don't think social distancing is being practiced at all," she said. "It's hard on some of the trails because they're very narrow, so it would be hard to get that distance."

Milam said tourists are going to the Harps grocery store in Jasper and to the Ozark Cafe, where they can go inside and pick up take-out orders. She said those businesses are frequented by elderly people who live in the area.

Albers said he limited services last week, which was spring break for many schools. Albers said he took no new canoe rentals last week, and only provided canoes to people who had made reservations earlier or were staying in the resort's 27 cabins or 14 recreational vehicle spaces.

Albers said the Buffalo Outdoor Center store will close Wednesday and remain closed until May.

"We've shut down the canoe rentals, shuttles for the river operations," he said Monday.

Albers is taking no new cabin reservations for April, but cabins will be available to people who made reservations earlier.

"We're allowing people who have current reservations to keep those reservations," he said.

They can check in remotely, go to their cabin, self quarantine or go for a hike, he said.

Albers said overcrowding became an issue over the weekend.

"We're trying to be proactive in the community and also protect our employees and the guests, but the guests aren't protecting themselves," said Albers. "What has happened has scared our employees."