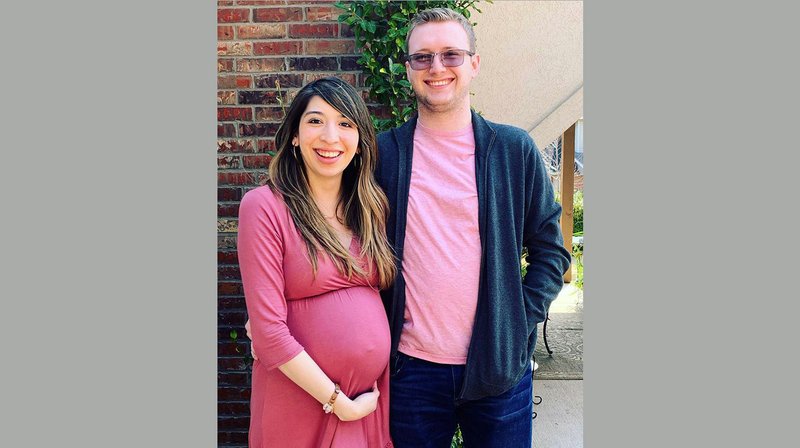 Tanya Schein of Rogers is due Wednesday. Her husband, Barrett, will be the only visitor allowed when she gives birth to their son. (Special to the Democrat-Gazette)

Caitlin Kenney had a plan for the day she delivers her first baby. She had a backup plan, too.

That's all changed as covid-19 spreads across the state and Kenney, like many other soon-to-be parents in Arkansas, is having to adjust as family members cancel travel plans and local hospitals limit the number of visitors patients can see.

"I'm a little nervous, heartbroken for sure," the Paragould resident said. "I know that things could very well change from now to the time of my delivery."

Kenney, who is due in June, hired a doula to guide and advocate for her when she gives birth to her new daughter, whose name will be Eva Pearl. She wanted her husband and mother at her side as well and a friend to take photographs.

In case her husband, who works in Memphis a few days a week, couldn't be there in time for the delivery, the backup plan called for her mom to stay nearby, and for him to get to the hospital when he could.

Now, Kenney's limited to one visitor. So if her husband can't get there, she'll give birth alone, and he'll come meet his daughter when he can. Her mother and the doula won't be there.

Decisions about visitation policies (how many are allowed, or whether they're allowed at all) and other procedural protocols are up to individual hospitals for now, said Dr. William Greenfield, an obstetrician-gynecologist with the Arkansas Department of Health, in an email through a spokeswoman.

But the Health Department is developing guidelines for patients and providers, Greenfield said.

At Baptist Health Medical Center in Little Rock, a new policy limits visitors to one for delivery and postpartum patients.

At the University of Arkansas for Medical Sciences, patients in the maternal medicine and neonatal intensive care units are in private rooms. Women giving birth can have only their spouse or partner with them, spokeswoman Leslie Taylor said in an email.

There is "limited information" about covid-19 and pregnancy, but based on past coronaviruses, pregnant women do not seem to be at increased risk of contracting the virus, Greenfield said. For those who do, there doesn't appear to be an effect on pregnancy, he said.

But, pregnancy does affect the body's immune system and may put those who are infected at a higher risk for "severe illness," he added.

Most of the expectant parents interviewed by the Arkansas Democrat-Gazette said they weren't as worried about contracting the coronavirus as they were at the prospect of giving birth alone, or, for one man, at the idea of missing the birth of his first child.

For the first time, Zachary Zbylut had to wait in the car last week while his pregnant wife went in for a check-up.

The Fayetteville couple is expecting their baby girl, Elliott, in about seven weeks. Zbylut's 's wife had planned to have him, her sister and her mother in the room when she delivered.

In addition to concerns about the lack of information about the effect of covid-19 on expectant mothers and unborn babies, Zbylut isn't sure whether his wife will be allowed to have any visitors.

"It would be really devastating if I missed the birth of my daughter," he said.

In Rogers, Tanya Schein's doctor originally said she could have two visitors when she gives birth. Since then, the number has dropped to one. Her husband will be there when their son, Rowan Cole, is born.

Schein is due Wednesday.

Rowan will be the first baby born in either of their families in 14 years, and they're planning FaceTime chats, pictures and phone calls, maybe even standing across the street from one another so family members can see the baby.

"I am nervous, and everything makes me really nervous regarding the coronavirus, but I know that at the end of the day I'm going to have my baby and I'm not going to really complain or care," she said.

Like Kenney, Jennica Bridgeman had planned to have her husband, a doula and someone in the hospital to take pictures. It's her second time to give birth, and she and her husband have adopted two others.

She's planning not to have visitors, including her children, come see the baby in the hospital. She says that isn't too much of a worry, because they'll have plenty of time together after her daughter is born. But it's not what she'd planned.

"My anxiety over the actual virus is relatively low," she said. "All of my anxiety has come from the ways that this could affect my birth."

Danielle Green's mother was there for the birth of her first son; the boy's father wasn't present. But for her second child, due in August, she's not sure whether anyone, including her partner, will be allowed to be with her.

"She was my everything before and after so I can't imagine not having my mom there," Green said.

Green, a Rogers photographer, took pictures of a birth recently, and after the experience, decided she wanted photos of her own delivery, too.

She's considering a home birth if more visitors aren't allowed by the time she's due. She hasn't gotten information from her doctor on what to expect.

"It's kind of like a dystopian novel," she said.

Kendra Monk, who works for a home health care service in Little Rock, was 40 weeks' pregnant as of Monday. She'd planned to have both her parents nearby. But her father, who has COPD, can't travel now after his flight was canceled. And her mother also has respiratory problems and can't travel.

"It's very emotional," she said.

Her husband will be there when she has the baby, she said. But she's worried about going into a hospital where her new baby could come in contact with infected people.

"I have to fear for her life before she's even brought into this world," Monk said.