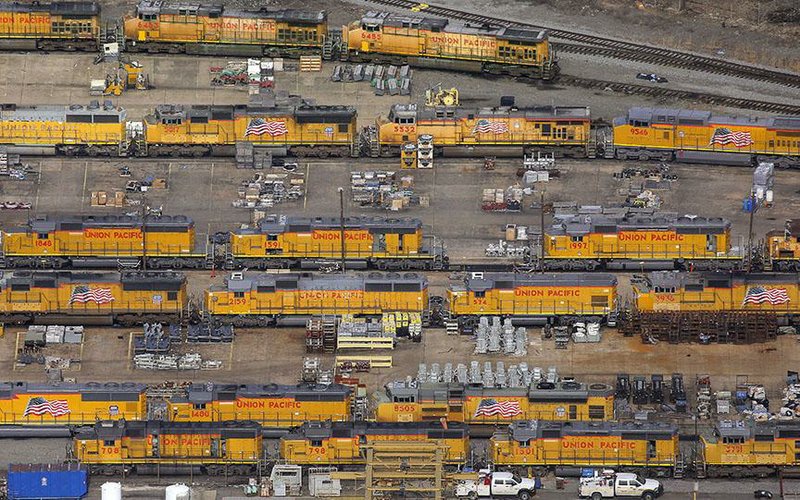 Union Pacific locomotives sit in different stages of repair in February 2018 at Union Pacific Railroad’s Jenks Shop heavy locomotive repair facility in North Little Rock. The overhaul and maintenance facility, among the largest in the world, is closing temporarily and furloughing most of its workers amid what a company representative called an “unprecedented decline in business volume.” (Democrat-Gazette fi le photo)

Most of the employees at a Union Pacific facility in North Little Rock that maintains and refurbishes the railroad's locomotives are being furloughed as a result of what a company representative said was an "unprecedented decline in business volume" stemming from the coronavirus pandemic.

The railroad is temporarily closing its Jenks Locomotive Facility and furloughing most of its staff, said Kristen South, senior director for corporate communications and media relations for the Omaha, Neb.-based railroad.

"Many of our customers have reduced or halted production," she said in an email. "While we anticipate volumes will return over time, we are taking actions to protect the company from further economic impacts of the virus."

Some managers and craft employees will remain on-site in the facility's maintenance area "to focus on closing outstanding work and prepare for reopening," South said.

The company will reevaluate economic conditions during the week of May 18 to determine if operations at the facility can resume June 1, she said.

The facility, often called the Jenks Shop, is the largest of its kind in the Union Pacific network and among the largest in the world, according to the company.

The majority of the complex is dominated by the main Jenks Shop heavy locomotive repair facility, with more than 272,000 square feet of space, 227,000 of which is devoted to the main shop floor.

The complex includes five other structures and several designated areas, each with a special purpose, including a material storage yard, storage tracks, a load test facility, a shutdown/start-up area, a prewash building, a tank farm and a pump-house, plus a locomotive paint shop, air brake shop, wheel shop, turbo repair shop and component remanufacturing center.

South declined to say how many people are affected by the furloughs.

"Union Pacific does not provide site-specific numbers because impacted employees will have the right to bid and bump in accordance with the seniority rights granted to them as part of the collective bargaining agreement," she said.

The downturn brought on by the pandemic is industry-wide.

According to data from the Association of American Railroads, carloads of commodities have slumped for more than seven straight weeks, reaching their lowest level in records going back to 1999 when the usual year-end drop-offs in demand are excluded, Bloomberg News reported.

"We're just doing everything in our power to adjust to this dramatic decline in volume," Lance Fritz, chief executive of Union Pacific Railroad, said in a recent Bloomberg TV interview. "Right now it's all about getting the business right-sized for our current volume environment and trying to get an understanding for how deep and how long this downturn is going to last."

Fritz said carloads have dropped 22%-23% from a year ago and could be as much as 25% lower through this quarter.

He said all discretionary spending at Union Pacific has been postponed, and capital spending plans were cut $150 million to $200 million.

The workforce at the railroad is also down 15% from a year earlier, and managers were asked to take a week of unpaid leave each month for the next four months, Fritz said. All executives and board members are taking a 25% pay cut through that same period.

A "fair amount" of those jobs that are furloughed or idled will come back when things return to normal, Fritz said.

The Norfolk Southern railroad said Wednesday that its first-quarter profit fell 44% because of a one-time charge related to locomotive sales and weak shipping volume driven by the coronavirus outbreak, according to an Associated Press report.

Norfolk Southern said shipping volume declined 11% in the quarter as manufacturers in a variety of industries slowed production because of the coronavirus outbreak and automakers temporarily closed their factories. The number of carloads the railroad is delivering has continued to fall, and volume is down 30% in the second quarter so far.