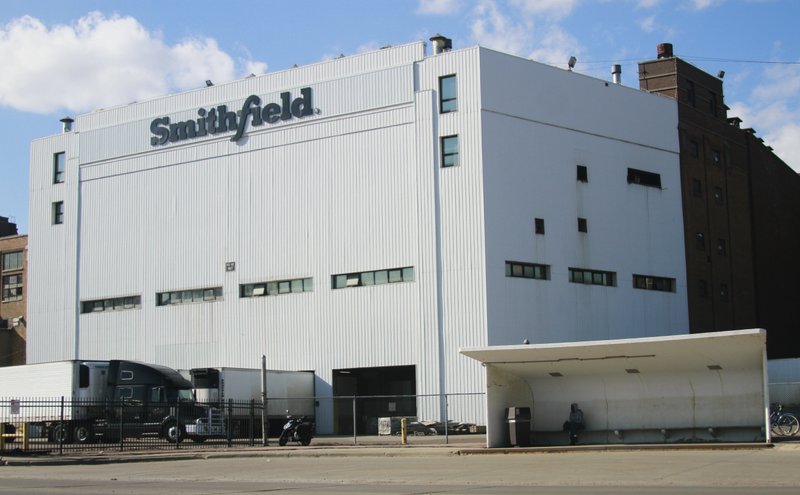 This April 8, 2020, file photo shows the Smithfield pork processing plant in Sioux Falls, S.D., where health officials reported dozens employees have confirmed cases of the coronavirus infection. Meat isn't going to disappear from supermarket shelves because of outbreaks of the coronavirus among workers at massive slaughterhouses, but there could be less selection and higher prices as plants struggle to stay open. Smithfield Foods has halted work at the plant, as of Monday, April 27, 2020. ( The Associated Press )

Conditions at U.S. meat plants contributed to increased risk of coronavirus infections, which ultimately led to more than 4,900 workers getting sick, according to the Centers for Disease Control and Prevention.

The agency cited difficulty maintaining social distancing and adhering to the heightened cleaning and disinfection guidance among the factors that increased risks for workers. There were 20 deaths among employees as the virus spread to 115 meat plants across 19 states, the CDC said in a report Friday, citing data covering April 9 through Monday. None of the plants in the report was in Arkansas.

Experts, unions and advocacy groups have said meat companies failed to protect employees adequately as the virus spread quickly and then forced plant shutdowns. The rapid spread of the disease underscored how lower-income U.S. workers became more vulnerable in the pandemic era. "Socioeconomic challenges" might have contributed to employees continuing to show up for work, even if they felt ill, the CDC said. Some companies offered bonuses for attendance, which may have further encouraged sick people to go in.

Meat-plant employees are among some of the most vulnerable populations. The positions are often filled by immigrants, since many U.S. workers shun the grueling and sometimes dangerous work. The jobs are often low-paying, and it's a work environment where sick leave is rare and even bathroom breaks are restricted. At some plants, virus infections ran as high as 18%.

A wave of outbreaks at meat plants ruptured the nation's supply chain for protein, sparking shortages at grocery stores. Shutdowns at major slaughter plants started in early April. Even though the industry faced only a dozen closures, producers have consolidated production and few remedies are available when even a handful of facilities are down. Beef and pork prices are surging, and farmers have been forced to destroy tens of thousands of animals.

With President Donald Trump invoking the Defense Production Act this week to keep plants running during the pandemic, unions are sounding the alarm that workers will continue to face dangerous conditions.

"The president's executive order will only ensure that more workers get sick, jeopardizing lives, family income, communities, and, of course, the country's food supply chain," said Kim Cordova, president of Local 7 of the United Food and Commercial Workers International Union, which represents 3,000 workers at the JBS SA beef plant in Greeley, Colo.

At huge plants handling thousands of animals a day, employees are jammed into elbow-to-elbow processing lines that run at lightning speeds.

"The pace and physical demands of processing work made adherence to face-covering recommendations difficult, with some workers observed covering only their mouths and frequently readjusting their face coverings while working," the CDC said.

English is often the second-language for many workers, and some unions have cited a lack of proper signs outlining virus-prevention methods in different languages. The CDC cited language barriers as a risk factor, reporting that one facility reported a workforce with 40 primary languages.

Some experts and unions have warned that reopening shuttered plants may further disrupt the supply chain. Workers probably will continue to get sick, leaving the industry shorthanded and struggling to run at full capacity.

"It's a bad idea," said Kooper Caraway, president of Sioux Falls AFL-CIO, which represents 3,700 workers at Smithfield Foods Inc.'s South Dakota pork plant, where more than 850 workers had tested positive for the coronavirus. "If the intention is to make sure that the production is not slowed down too much, this is a short-sighted measure that will end up slowing production more than it would have."

The union said Friday that the plant will partially reopen Monday after shuttering for more than two weeks.

Smithfield Foods has asked about 250 employees to report to the plant to staff two departments -- ground seasoned pork and night cleanup, the union said.

The Virginia company asked that employees who are sick or who might be more susceptible to severe illness from the virus -- those over age 60 or who have existing health problems -- to stay home, according to the union. For most people, the new coronavirus causes mild or moderate symptoms, such as fever and cough that clear up in two to three weeks.

Tyson Foods announced Friday that it will be reopening its plant in Logansport, Ind., with limited production.

The pork processing plant closed for 14 days in an effort to contain the outbreak, and all workers were tested for the coronavirus. Nearly 900 workers tested positive. The decision to reopen followed a tour with local health and government officials and a union representative, according to a news release.

The company said it has taken additional measures to ensure a safe work environment, including adding more work station barriers and hand-sanitizer dispensers. It also plans to have designated monitors to help enforce social-distancing.

The Arkansas-based company said it has doubled its bonus for employees, depending on attendance, and has increased short-term disability coverage to 90% of normal pay until June 30 to encourage workers to stay home when sick.

The Logansport location is the first of several Tyson plants to receive a mobile health clinic to conduct daily on-site clinical screening and provide services like testing for the coronavirus, the company said.

With these closures, Tyson's daily slaughter capacity is down by an estimated 9,300 cows and 42,000 hogs, according to Urner Barry, a market research firm focused on poultry and meat products. Tyson slaughters an average of about 155,000 cows and 461,000 hogs a week.

Information for this article was contributed by Millie Munshi of Bloomberg News; by staff members of The Associated Press; and by Nathan Owens of the Arkansas Democrat-Gazette.