RESTAURANT TRANSITIONS: Too soon to dine in, some say 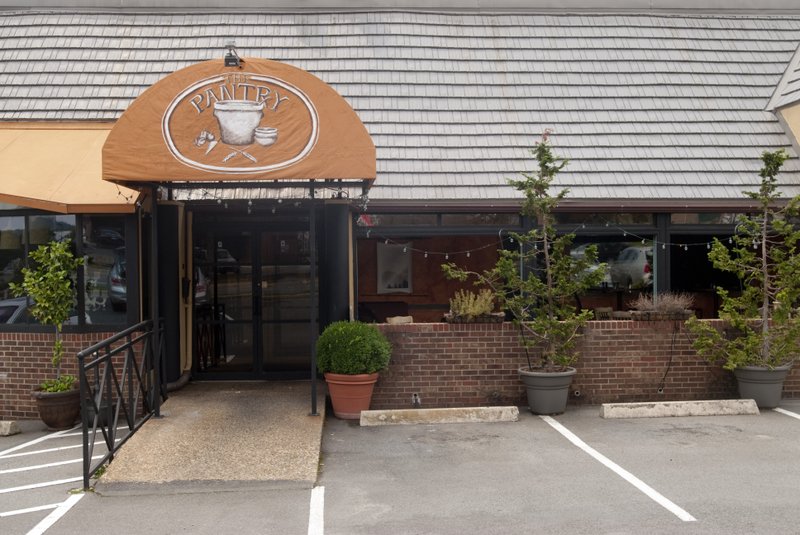 The Pantry in west Little Rock will continue to operate curbside pickup and won't go back to dine-in service next week. (Democrat-Gazette file photo)

Gov. Asa Hutchinson announced on April 29 that restaurants could open to the public for dine-in service starting Monday, under a somewhat stringent set of circumstances and conditions, including a maximum seating of 33% of capacity, limiting parties of no more than 10, maintaining distance between customers, requiring masks except while eating, screening employees daily and cleaning regularly.

A second phase, increasing seating to 50% of capacity, would follow if this phase proceeds without major consequences. Restaurants in Arkansas have been limited to takeout, delivery and drive-thru service since March 20.

Little Rock has relaxed the curfew put in place by Mayor Frank Scott Jr. from 9 p.m.-5 a.m. to midnight-5 a.m. with plans to completely lift the curfew May 21.

Some restaurants are standing pat.

Right away we heard from several restaurant owners who said they have no plans whatsoever to change what they're currently doing, which is a combination of curbside takeout and delivery. That includes Capi Peck, owner-chef of Trio's, 8201 Cantrell Road in west Little Rock, who told us, "Absolutely not, I didn't even have to think twice about it." And Gio Bruno, co-owner of Bruno's Little Italy, 310 Main St., Little Rock, who insisted, "I'm not going to change a thing from the business model we have right now."

Tomas Bohm, chef-owner at The Pantry, 11401 N. Rodney Parham Road, and The Pantry Crest, 722 N. Palm St., in Hillcrest, posted April 29 on his Facebook page, "The Pantry Restaurants will not open for dine-in in Phase 1 — curbside and to-go only." The Pantry Crest has been temporarily closed for several weeks.

From Mary Beth Ringgold, co-owner/chef of Capers, 14502 Cantrell Road, said: "We are planning to continue with curbside pickup, along with call-ahead curbside pickup from our Market at Capers behind [the restaurant]," which offers handmade cuisine packaged for single and multi-meals — soups, casseroles, desserts, specialties and nightly dinner specials. (Details are available at capersrestaurant.com.) "As soon as we feel comfortable that the number of new cases of covid-19 begins to subside, we will move toward an appropriate opening plan," Ringgold adds.

And Katherine Eldridge, owner of Doe's Eat Place, 1023 W. Markham St., Little Rock, which has been closed indefinitely, posted this message Saturday on the restaurant's Facebook page (facebook.com/DoesEatPlace): "We have made the decision to not open on May 11. We will continue to watch the numbers and we will open when we feel it's safe to do so. The next couple of weeks we will be cleaning, painting and getting things ready for when we do open. Stay safe and we will hopefully see you in a couple of weeks."

Other restaurants are moving forward.

Three Central Arkansas Whole Hog Cafe locations — 2516 Cantrell Road and 12111 W. Markham St. in Little Rock and 5309 Arkansas 5 North in Bryant — reopened Friday for takeout only until May 11, whereupon they will open for dine-in at 33% capacity, "following the AR Dept of Health and governor's office guidelines," according to a spokesman.

Benihana in North Little Rock's Wyndham Riverfront Hotel, 2 Riverfront Place, will open for dine-in Monday, according to a post on the Facebook page of its sister restaurant, the Riverfront Steakhouse, which will remain closed. "We will provide an update as to our reopening plans as soon as possible. Stay safe and we look forward to seeing you again soon."

Whole Hog Cafe has reopened its two Little Rock outlets and the one in Bryant for take-out and will reopen limited dine-in service on Monday. (Democrat-Gazette file photo)

And all six Taziki's restaurants — four in Central Arkansas plus two in Northwest Arkansas — will open to dine-in customers on Monday. So will Paninis & Company in Little Rock's Midtowne Shopping Center, N. University Ave., also owned and operated by JTJ Restaurants. And JTJ's Jim Keet says he'll fully open Petit & Keet, 1620 Market St., Little Rock, which started curbside pickup last week, for dine-in on May 18. "That's our third anniversary and we wanted to make a big deal out of it," he explains. The additional week also will make it possible to make sure all the governor's protocols for dine-in service are in place and that new menu items will be ready. He wants to continue operating the takeout part of the business as well. Meanwhile, Keet sees an early July opening for his latest project, Cypress Social, nearing completion in the former Cock of the Walk campus, 7103 Cock of the Walk Lane (off Maumelle Boulevard), on the North Little Rock side of Maumelle Boulevard.

Please note that this is a very small sample, and not meant in any way to be comprehensive. If you're looking for information on any specific restaurant, we recommend calling ahead and verifying their status before setting out for it — and the governor's guidelines do include making advance reservations where possible.

And speaking of Maumelle Boulevard, we've observed activity at the former South Boulevard, aka SoBo, 10840 Maumelle Blvd. A small black dumpster occupies a couple of parking spaces in front of the restaurant and a couple of weeks ago workers were hauling booth benches out of the door and loading them onto a trailer. There is still a "for lease" sign in the window; a call to the phone number on it produced only a voicemail recording and there was no reply to our message by deadline.

Mockingbird Bar & Tacos, 1220 Main St., Little Rock, reopens on Tuesday for curbside pickup — no dine-in for now, says co-owner Jack Sundell — and will offer most of its a la carte menu, including tacos, empanadas, quesadillas, taco salad and chips with guacamole, salsas, queso and bean dip; family-size versions of chips and dips, taco and empanada platters; and family-style pans of enchiladas (using Rabbit Ridge chicken and seasonal vegetables and cheese) and chilaquiles. Hours will be 11 a.m.-8 p.m. Tuesday-Sunday. Order over the phone at (501) 313-5413 or email info@mockingbirdLR.com.

This is the final week of operation for Catfish City & BBQ Grill, 1817 S. University Ave., Little Rock, which announced late last month via its Facebook page (facebook.com/catfishcity) that its building has been sold and it would be closing after more than 36 years of serving catfish and barbecue. "We are desperately trying to find a restaurant with a drive-thru and a possible investor, or possibly collaborate with an existing restaurant that may need a partner," the post said. The phone number is (501) 663-7224; the website is catfishcityandbbqgrill.com.

We don't yet have an opening date for Old Mill Pizza, in the Lakehill Shopping Center, 4000 John F. Kennedy Blvd., North Little Rock, but it's close: The gentleman who answered the phone at (501) 379-8539 says it'll possibly be top of next week, pending a final inspection. A website, OldMillPizzaNLR.com, is in progress; the Facebook page is facebook.com/OldMillPizzaNLR. 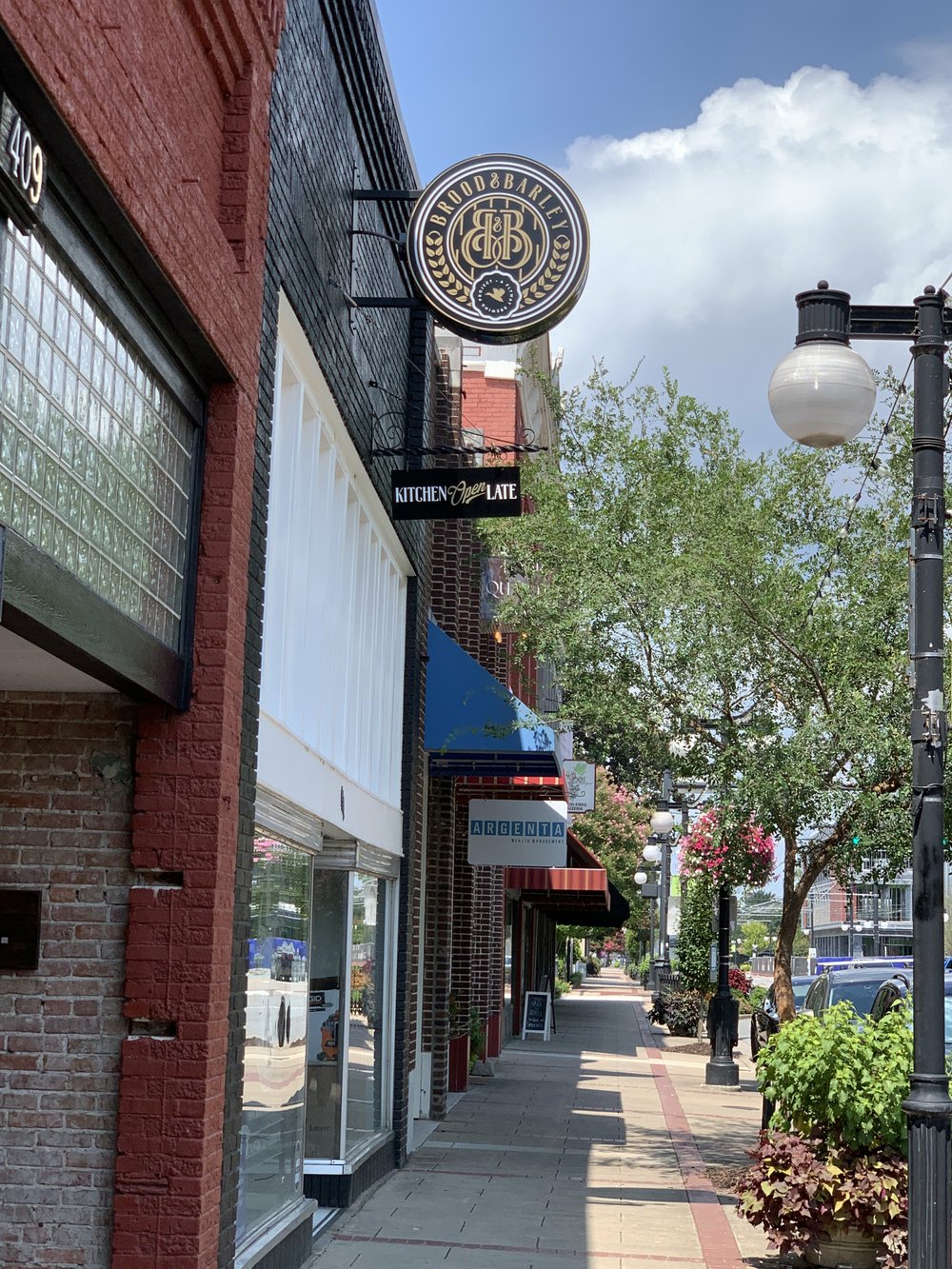 The covid-19 crisis has sidelined the opening, originally planned for mid-April, of Brood & Barley, a second Flyway Brewing taproom that has gone into the former Core Brewing Public House at 411 Main St. in North Little Rock's Argenta Arts District. But Flyway Brewing owner Jess McMullen has been routing, as a sneak peek, some of chef Brayan McFadden's menu items through the door at the original location, around the corner at 314 Maple St., including appetizers (a Beer Cheese Fondue with sauteed garlic butter pretzel dumplings, for example), desserts (Chocolate Gravy Fondue with sauteed cinnamon sugar pretzel dumplings) and even McFadden's "Legit Cheesesteak." In the next week or so, McMullen says, he'll also sell some of the special brews he'll offer at Brood & Barley. Meanwhile, he has no plans to open Flyway on Monday, although it's not eventually out of the question; in the meanwhile, he says, "we've established a very active curbside business."

And an outlet of The Original Hot Dog Factory is supposedly heading for Little Rock. We have neither a location nor a timeline, and a query to the Atlanta-based chain was not returned by deadline. You can check out the menu at theoriginalhotdogfactory.com.