Hutchinson is 'distressed' by violations 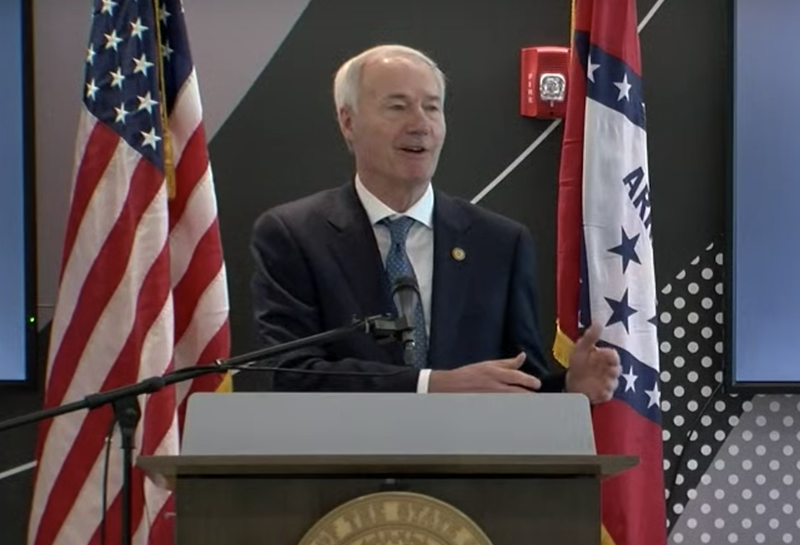 Gov. Asa Hutchinson said Monday he was "distressed" by weekend reports of Arkansans practicing poor social distancing as his administration seeks to go forward with plans to allow businesses shuttered by the covid-19 pandemic to reopen their doors.

The governor's remarks, delivered at a news conference in El Dorado, came as the Department of Health reported an increase of 31 cases of coronavirus over a 24-hour period Monday, raising the state's total number of infections to 4,043 since the first case was reported in March.

The number of Arkansas deaths attributed to the virus rose by three Monday to 94.

As a precaution against the spread of covid-19, state health officials have ordered businesses to limit the number of patrons in their stores and encourage the use of face masks. Restaurants that resumed dine-in service Monday were limited to one-third of normal capacity, along with other restrictions on distance between parties and the size of groups.

[Video not showing up above? Click here to watch » https://www.youtube.com/watch?v=Wm7JBZyeaEc]

Despite the publicity over restrictions related to opening up activities, Hutchinson said he was made aware of a "few" examples of customers failing to abide by them over the weekend. He also warned that a concert planned for Friday in Fort Smith would be in violation of the Health Department's directives for larger indoor event spaces, which are not supposed to reopen until May 18.

"We want to stay open," Hutchinson said. "The way you stay open and not have a resurgence is to be disciplined in our behaviors."

The governor declined to single out any stores or restaurants for poor behavior, though he said he had reached out to the regional offices of one retailer to express concerns that its Arkansas locations were not meeting the standards set by the Health Department.

One post on social media that garnered much attention over the weekend claimed to show dozens of people, many without masks, crowded together at a department store in "North Central" Arkansas. (A spokeswoman for the governor said the retailer identified in the post was not the one he had spoken with.)

Health Secretary Nate Smith said department officials would respond to reports of businesses failing to comply with state directives by issuing cease-and-desist letters. Businesses that are licensed by the Health Department could have their permits revoked if they fail to comply with the directives, Smith said.

Hutchinson said he hoped such enforcement mechanisms would be unnecessary.

"I want to rely upon the good sense of Arkansans," Hutchinson said. "They know what the risks are. We want them to do the right thing both from the employer standpoint but also in terms of the patrons."

Meg Mirivel, a spokeswoman for the Health Department, said the agency has turned over a few cases to local law enforcement and issued cease-and-desist letters, but has not revoked any licenses as of Monday.

The owners of a historic Fort Smith concert venue said Monday they plan to go forward with a Friday show by Bishop Gunn frontman Travis McCready despite the governor's warnings that the concert violates the state's orders.

Large indoor event spaces are prohibited from opening their doors to the public until May 18 -- three days after the planned concert at Fort Smith's TempleLive -- under a directive issued by the Health Department last week.

TempleLive's website says that as many as 229 tickets will be made available for Friday's show, about a fifth of the venue's 1,100-seat capacity.

"That has not been approved," the governor said Monday. "We've looked at their plan, and their plan was insufficient as well. And so that concert does not have our approval."

After the governor's news conference, TempleLive owner Lance Beaty issued a news release defending the decision to hold the concert.

"Our counsel continues to be engaged in discussions with the state, even late this evening, and we hope that science and reason will produce a plan going forward that is satisfactory to all," Beaty said. "We appreciate that the situations faced by the Governor and his staff are serious and complex, and much of Arkansas's COVID19 approach has been praiseworthy. However, in these complex matters, general policies and directives are not always best as 'one size fits all.'"

Tickets for the concert are being sold in "fan pods" that will be seated at least 6 feet apart from other groups of fans, according to the venue's website. Masks will also be sold at the show.

According to Billboard, the show "will likely be one of the first live concert events since mass gatherings were banned across the U.S. in mid-March due to the spread of the coronavirus."

An employee of Hutchinson's office has tested positive for covid-19, according to a spokeswoman who said the governor was not at risk of infection.

Katie Beck said the governor's office has had two employees tested for covid-19 based on symptoms.

"One was negative and one was positive," she said. "The positive is located outside of our Little Rock office and thus did not have any contact with central office personnel or the governor. The positive case has fully recovered."

Lt. Gov. Tim Griffin said nobody in his office has tested positive.

"I took a test and so did my daughter. Negative," he said.

Griffin aide Ben Gilmore took the test and "he was negative," Griffin said.

Spokespeople for the attorney general, secretary of state, treasurer and land commissioner offices said none of their employees has tested positive for covid-19.

Skot Covert, chief of staff in the state auditor's office, could not be reached.

Information for this article was contributed by Michael R. Wickline, Sean Clancy and Joseph Flaherty of the Arkansas Democrat-Gazette.