Climbing to the top

Some vines bring a variety of elements to a garden — but beware of the invasive ones by JANET B. CARSON Special to the Democrat-Gazette | May 16, 2020 at 1:55 a.m. 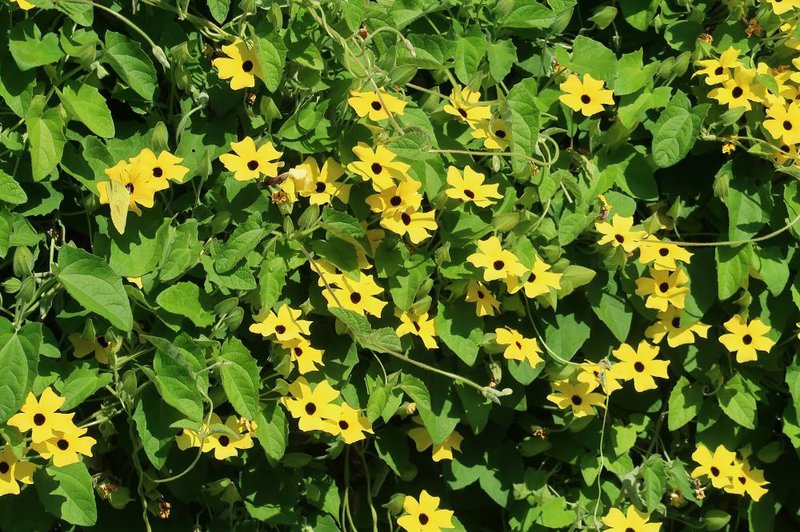 Black-eyed Susan vine (Thunbergia) is an eye-catching annual in Arkansas. (Special to the Democrat-Gazette/Janet B. Carson)

Vines offer gardeners a quick solution for a vertical screen. They soften a wall or hillside, and offer some shade to plants growing beneath them. A vine is a plant whose stem requires support and that climbs by tendrils or twining. Or it can creep along the ground if it has nothing to support it. Vines can be woody or herbaceous, evergreen or deciduous, annuals or perennials, native or non-native, invasive or non-invasive -- so choose wisely.

When choosing vines for your garden, consider how much sunlight you have and how much space you want the vine to cover.

Do you want a permanent vine or an annual vine to give you quick coverage in one season?

Some good annual vines include hyacinth bean, moonflower morning glory, black-eyed Susan vine (Thunbergia), cypress vine and morning glory. (But be careful with the common morning glory.) These vines have some stunning flowers in a wide range of colors, but they can freely reseed themselves to produce vines for future years.

One of the most popular perennial vines is clematis, and it comes in many options. Most are deciduous, but a few are evergreen, including Armandii and Montana clematis. Most clematis do best in the sun. There are many options for bloom size, color and season.

The native Carolina jasmine needs to be contained or it can be aggressive, but it has lovely yellow flowers in the spring, and the vine is evergreen.

Confederate jasmine is a highly fragrant white-flowering evergreen vine that is usually reliable in the southern half of the state. It did get some winter kill this year but is bouncing back.

Two related native vines include cross vine and trumpet creeper. Both can be aggressive. New introductions of both these plants are a bit better behaved in the garden.

Trumpetcreeper can bloom all summer. The common native species is often sold as hummingbird vine. The flowers can produce large seed pods. Between root suckering and seed dispersal, it can be invasive. Newer cultivars are more suited for the garden and include Madame Galen, with large reddish-orange blooms, and the Summer Jazz series, with a variety of color choices.

Many gardeners love the sweet fragrance of wisteria in the spring, but again, variety choice is important.

The common oriental wisteria (Wisteria sinensis and W. floribunda) will root wherever they touch the ground and can easily take over a garden or escape into the wild. Some better choices include the native American wisteria (W. frutescens) with a new introduction called Amethyst Falls, and Kentucky Wisteria (W. macrostachys), with a cultivar called Blue Moon.

Climbing hydrangea is a vine for shade. It can be a bit slow to get established, but once it does it has gorgeous blooms in late spring.

Beware of English ivy. It must be contained if you are growing it, because it won't stop growing -- up your trees or house if left unchecked.

HOW TO GAIN CONTROL

So, what do you do if vines have taken over your landscape? Identify the vines, and start your control.

Physically removing as much of the problem as possible is a good place to start. Herbicides are available, but the woodier the plant, the harder it is to kill, and often vines are enwined with desirable vegetation. So, physically pruning, digging up roots, and then spot treating the cut edges can help.

When we look at the vines that are often a problem in Arkansas the top contenders are:

Kudzu is typically not a landscape problem, but it blankets natural areas all across our state. Japanese honeysuckle and greenbrier are found everywhere, from home landscapes to parks and natural areas.

Other common plants that generate complaints include two natives:

• Poison ivy, which can form a woody vine in trees or can spread as a groundcover on the ground.

• Virginia creeper, with tendrils that allow it to fasten itself to rocks, bricks or bark -- and it is a strong climber.

One of the largest families of woody vines in Arkansas are the dewberries -- or trailing blackberries -- all of which are native.

Vines have their place in our landscapes, and there are some great ones to choose from. It all comes down to the right plant in the right place. Do your homework on the front end and know what to expect.

There are a lot of good vining plants out there. If you have a desirable vine, make sure it has a trellis or structure to grow on and keep it pruned to that structure.

Avoid planting vines that are known to be too aggressive. 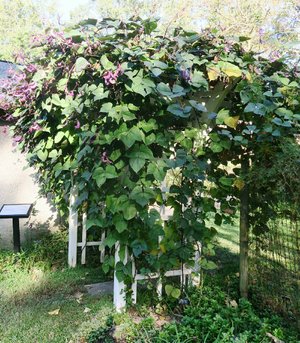 Hyacinth bean or lablab vine has showy amethyst and violet blossoms followed by purplish seedpods.(Special to the Democrat-Gazette/Janet B. Carson) 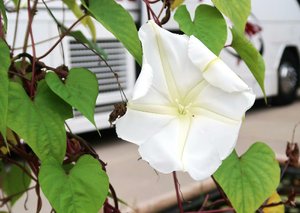 Moonflower morning glory is an annual vine.(Special to the Democrat-Gazette/Janet B. Carson) 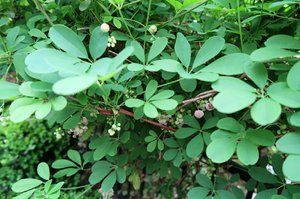 Akebia is a well-behaved vine with mauve flowers that appear in late spring. (Special to the Democrat-Gazette/Janet B. Carson) 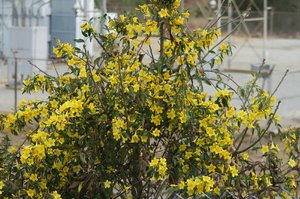 Carolina jasmine is an evergreen vine with bright spring flowers; it should and can be controlled. (Special to the Democrat-Gazette/Janet B. Carson) 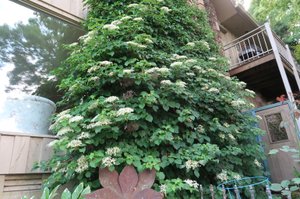 Climbing hydrangea is a vine for shade. (Special to the Democrat-Gazette/Janet B. Carson) 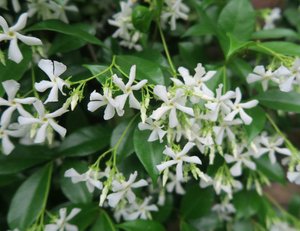 Confederate jasmine has very fragrant white flowers. (Special to the Democrat-Gazette/Janet B. Carson) 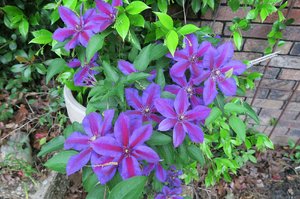 The perennial vine clematis comes in a wide range of colors. (Special to the Democrat-Gazette/Janet B. Carson) 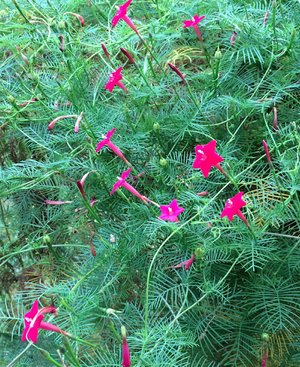 Cypress vine is an annual with feathery foliage and vivid blooms. (Special to the Democrat-Gazette/Janet B. Carson)

Print Headline: Climbing to the top