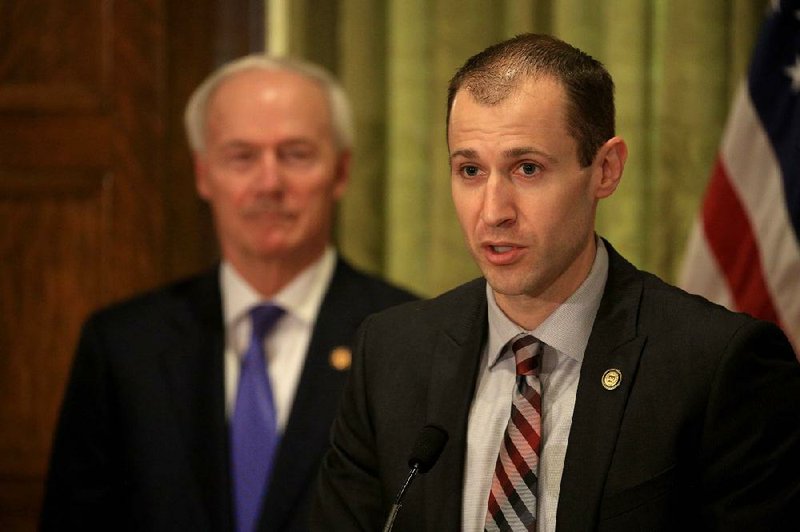 Secretary of Commerce Mike Preston, right, along with Gov. Asa Hutchinson speaks Monday May 4, 2020 during the daily covid-19 briefing at the state Capitol in Little Rock. (Arkansas Democrat-Gazette/Staton Breidenthal)

The Arkansas Legislative Council on Friday directed the state Department of Commerce secretary to pay up to $147.7 million in grants through the fledgling Arkansas Ready for Business program, instead of the lower amount the department planned on.

The council's action came after Commerce Secretary Mike Preston told lawmakers that the plan was to fund requests up to $124.5 million in order to hit a target agreed upon with lawmakers. That target was to provide at least 75% of the available money to businesses with up to 50 employees.

The council also approved a motion by Senate President Pro Tempore Jim Hendren, R-Sulphur Springs, directing Preston to make grants to businesses with up to 50 employees in one payment rather than two.

The motion also rejected a $50,000 grant limit and removed the requirement that 75% of the money go to businesses with up to 50 employees.

Hendren said the Legislative Council on May 8 approved spending authority of up to $147.7 million to fully fund all the applications, and "we kind of asked" Preston to provide at least 75% of the money going to businesses with 50 or fewer employees, and "those two things are in conflict."

He said that under his motion the department will have the flexibility to split the grant payments in half to businesses with at least 50 employees and require receipts from businesses getting $50,000 or more before the department makes the second payment. The grants are limited to $100,000.

"I do think there is overwhelming support for ... those that are waiting on $2,500, that is going to make the difference in them being able to make payroll, or get their people open, or buy the stuff that they need to open next week, [and it] doesn't need to be split into two payments," said Hendren, whose uncle is Gov. Asa Hutchinson.

Substantially more money will be put into businesses with up to 50 employees under this plan, but "companies with 60, 70, 80 people are also in pretty bad straits and can use the full funding, and that's what we approved last time," Hendren said.

Hutchinson had no comment on the council's action, said his spokeswoman, Katie Beck.

More than 12,000 applications were submitted for grants totaling $147.7 million.

According to the Commerce Department:

He said the Commerce Department had planned to provide half of the grant payment in direct deposits "up front as soon as we verify the application and the information." The department would approve the other half after reviewing receipts and a spending plan submitted by the recipient.

That's based on "the feedback that you guys gave us" and working with the inspector general's office, he said.

Both House Speaker Matthew Shepherd, R-El Dorado, and Sen. Jonathan Dismang, R-Searcy, sharply criticized Preston for the plan to split the payments in half. They were concerned about the needs of small businesses.

Dismang said, "I don't know how you derived ... the decision that somehow that's what the legislative body wanted to do, when this [council] decided not to take that up."

Preston said, "We heard a lot of opinions last week and suggestions and we thought we wanted to take some of those suggestions back.

"We have been working with [the inspector general's office] to best figure out how to audit these funds, and we thought if we could get the receipts coming in after we had done that initial payment, that would help us to determine" if the businesses are spending the funds in a correct way, they will be paid the second payment, he said.

Shepherd said he also had a problem with halving the payments.

"The fact of the matter that this was a highly volatile issue that both the House and the Senate spent countless hours working on resolution of, and this all came about by rolling out a program without legislative approval, which then put us in the position of having constituents, who had applied, who were expecting that they were going to receive help," he said.

"We were in the position of, do we stick to our guns as far as the legislative prerogative or do we try and help our constituents, and what we came to, was the process was botched at the outset, but we would be willing to move forward as long as there was a commitment and additional funding that was made available, so we could get money to the people that need it," Shepherd said.

"Everybody knows the process was not perfect, but we didn't go back and reinvent the wheel," he said. "We, to some degree, gave you the benefit of the doubt. Now we find out that despite the fact that Sen. Dismang made a motion [to fully fund the program] and, as I recall, Sen. Johnson asked him to amend it and Sen. Dismang was not willing to ... and we approved that motion as it was, and now we find out that in spite of the fact that no one made a motion to actually split it into two payments, the department is taking upon itself to change that and go with two payments."

Preston said, "There were a lot of opinions that day.

"We tried to take the feedback from the Legislature, is why we moved forward with that," he said. "We also worked with [the inspector general's office] in the auditing process, and we thought if we could receive some receipts, it would also help with some of the concerns we heard that day, that how do we give all this money out and have no audit trail? We can at least verify half of the funds upfront and that will make it more easy to release those second [batch of] funds."

Preston said he notified the council's co-chairmen, Rep. Jeff Wardlaw, R-Hermitage, and Sen. Cecile Bledsoe, R-Rogers, "of the breakdown of the funding, and that this was a proposal that we were going to implement going forward before we made payments [going] out."

But Wardlaw said, "I received one of those phone calls and you did not notify [me] that you were splitting it into two payments.

"That was not discussed on our call on Sunday," he said. "You did discuss the breakdown of the payments and how the percentages came out. But I didn't understand that you were splitting it into an upfront payment and a back end of payment. Today is the first time I recall hearing that."

Preston said he apologized for that.

Shepherd said, "Now we have moved forward a program without legislative approval and now we find out the terms of that program have been modified, in spite of the clear intent of the Legislature.

"I would hope that the department and everybody else that is listening and everybody else in state government will take serious what the Legislature does. That's my frustration with this. It was botched at the outset. It was rolled out without legislative approval, and now in spite of the fact that we spent several days working on a solution that now you decide to change the rollout.

"I think that is disappointing," Shepherd said. "I hope that the message is clear that the Legislature is not going to stand for that, and it doesn't need to happen again."

Sen. Terry Rice, R-Waldron, said Preston showed a casual attitude when he called lawmakers "you guys," part of a pattern of behavior that he has observed.

He charged that Preston suggested to representatives of Chinese companies in the governor's conference room in front of the governor that "these are now your legislators, and I can guarantee you that they will help.

"Sir, we are duly elected by the people of Arkansas. We are not anybody else's legislators from another country, and that attitude has carried right into this. That's very concerning, and I hope you can see that," Rice said.

"We are trying ... through transparency and through being forthright with the citizens, trying to rebuild some trust. This rollout of this program, I am not going to put it on anybody ... but it was plain to see people knew ahead of time," Rice said.

"This is what we're trying to get to the people of Arkansas, that we want a fair process," Rice said. "Do you see how your comments and actions can be detrimental to what we are trying to build a public trust? I am not saying you are malicious in this. But do you see the casual attitude that you have is not helping us?"

Preston later responded in writing to Rice's comments: "I do not recall any specific instance but I would hope that any company whether they be home grown here in Arkansas or from any other country in the world, once they become an Arkansas taxpaying business that they are supportive of those companies as well.''

Preston told lawmakers that the program was announced at 1:30 p.m. April 29 at the governor's daily news conference and would begin accepting applications at 5 p.m.

"That was the first time that we talked about that publicly to anyone," Preston said.

He said he thought the program had been authorized by the Legislative Council before it was rolled out and he later learned the "hard way that that was not the case, and we worked very hard over the course of the last week to rectify that and work with the Legislature and pull them in."

Rep. Robin Lundstrum, R-Elm Springs, said Friday that she is confused about how the first applicant submitted a grant application at 5:04 p.m., after filling out the application within four minutes of the website going live.

"All I can tell you is, as somebody who takes his honor very seriously, takes his trustworthiness very seriously, I sit here today and I tell you that [the information] we provided you is absolutely true," he said. "I came into public service with a good name. I shall leave one with a good name. It is absolute truth that no one applied before 5 p.m. The first application was at 5:04 p.m. I would give the applicants credit for having pulled this information together in numerous other settings as well."

Lundstrum said she thought that Hudson "is telling me the complete truth."

But, she added, "I know that that website went live at 5 o'clock and people hit the button at 5:04.

"But I suspect that the website was out long before 5 o'clock. It is just you allowed the applications to be submitted at 5 o'clock, but people could apply before then," she said. "While the vast majority of the state didn't realize it, I suspect some did and were able to get in line ahead of others, and I am questioning that.

"I am not questioning your honesty. I am questioning that this website may have been turned on a little bit early, and with a wink and nod some people got in line ahead of time, and I would like to know what's going on."

Preston replied, "When you say a wink and a nod ... it implicates our integrity, and that is not the case. It went out at 5 o'clock."