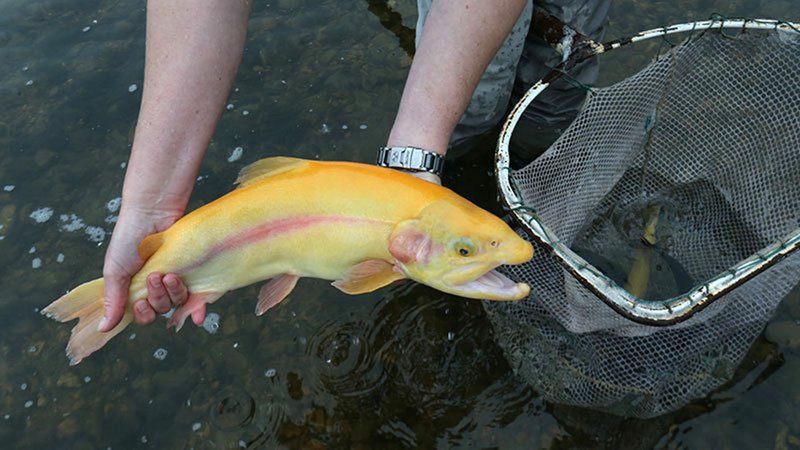 Arkansas Game and Fish Commission purchased golden trout from a commercial hatchery in Missouri and stocked them in the White River below Bull Shoals Dam. (Courtesy photo)

More golden rainbow trout have been stocked in the White River below Bull Shoals Lake dam. About 500 of the rainbow trout that have a color variation making them appear a bright golden yellow were part of a shipment of 10,000 rainbow trout stocked May 4 at river accesses.

The rainbow trout were bought from and delivered by Crystal Lake Fisheries of Ava, Mo. The purchase was made possible by a Federal Emergency Management Agency reimbursement to the state for flooding on the Spring River. Floods damaged the Jim Hinkle Spring River Fish Hatchery at Mammoth Spring in 2017, said Christy Graham, trout program coordinator for Game and Fish.

The Hinkle hatchery hasn't operated at full capacity since the flooding.

Game and Fish bought 60,000 rainbow trout, which included a few thousand of the color-variant golden rainbows, from Crystal Lake last year and is buying an identical amount this year. The fish will be delivered over the next three months.

While most will go into the White River, 15,000 will be stocked in the Spring River, Graham said.

The golden rainbow trout proved popular with trout anglers after they were stocked last year. This particular color-variant of rainbow trout was developed at the Crystal Lakes fish hatchery. The fish has the distinct pinkish stripe down the middle of its body like a regular rainbow trout, while the rest of the color varies from a pale white to light yellow to a bright golden yellow that gleams underwater. Otherwise, they are a rainbow trout.

"They are the same species genetically as a regular rainbow trout that we stock. They are just a color variant of a rainbow trout," Graham said.

This particular stocking coincided with about 5,000 rainbow trout from the Jim Hinkle Spring River hatchery that were stocked between Norfork and Calico Rock. These stockings occur regularly throughout the river system, Graham said.

In this case, Kent Coffey, Game and Fish technician, took about 2,500 trout on a pontoon boat and released them between the Norfork access and the Reds Landing access about five miles downriver. Then, Coffey reloaded the boat and with another 2,500 trout from the hatchery fish truck and stocked them downriver to Calico Rock.

"This allows us to better disperse the rainbow trout over a larger area of the river," Graham said. "The stockings from Crystal Lake are in one spot and what we call direct stocking. Some of the fish will disperse, but most will stay in the area they were stocked. Some, though, will move a good distance."

The average size of the Spring River-raised rainbows is 12 inches. The Norfork National Fish Hatchery also produces rainbow trout for stocking. But neither the Hinkle Hatchery nor the national hatchery produces golden rainbow trout.

The limit for trout on the White River below Bull Shoals Dam, including golden rainbow trout, is five per day. Anglers may keep only one trout longer than 14 inches.