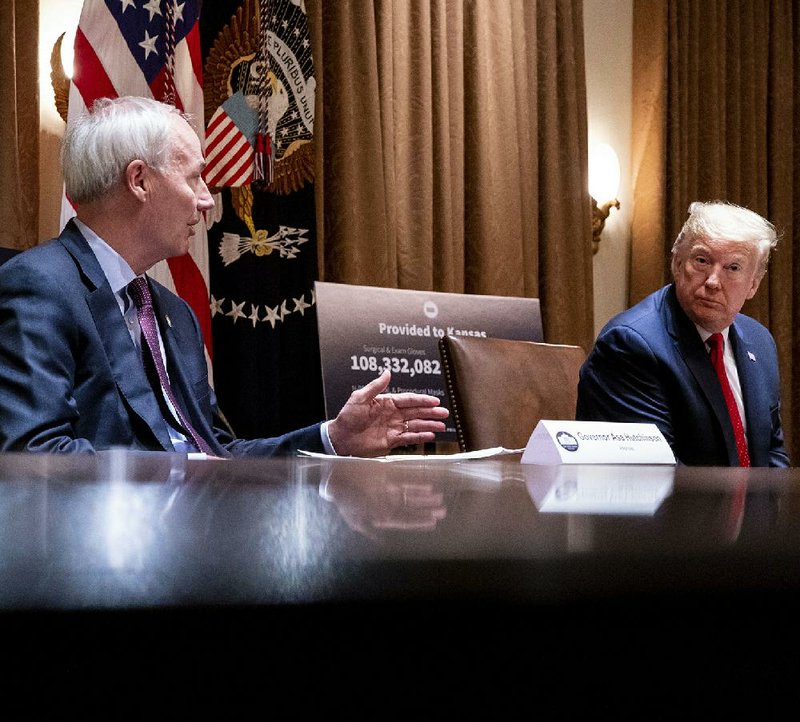 Gov. Asa Hutchinson tells President Donald Trump how Arkansas is faring in the coronavirus crisis at their meeting Wednesday at the White House. More photos at arkansasonline.com/521meeting/. (The New York Times/Doug Mills)

While acknowledging the impact the covid-19 closures have had on the state's economy, Hutchinson said some of the early data is better than initially forecast.

"We were projecting a 10% loss in our sales tax revenue year over year," Hutchinson said. "We're getting the numbers in and ... it's going be about 5%."

"Obviously, there's a loss there we expected, but we're beating all of those projections, including our payroll," Hutchinson said.

The state cut back its budgets for this state fiscal year, which ends June 30, and next fiscal year in anticipation of reduced tax revenue from the economic impact of the pandemic. Arkansas' unemployment, which had been under 4% for months, is expected to be about 12.5% when figures are released Friday.

In addition to touting the state's economy, Hutchinson also highlighted some of its covid-19 statistics.

"Just to give you a flavor of Arkansas, we have fewer than 100 hospitalized in Arkansas. We have right about 5,000 cases, all-total, cumulative. The active cases are much less than that," the governor told Trump.

"We've ramped up our testing," he said, noting that the state is on pace to test 2% of its population by month's end. The state has about 3 million people.

Hutchinson thanked Trump for his "leadership on the economy."

"The message that you have that we need to get back to work and get back to business is critical in terms of shaping the direction of our country," the governor said.

As it shifts its focus to reopening the economy, the White House is inviting governors to meet with the president to discuss state efforts.

On Wednesday, Trump met with Hutchinson as well as Kansas Gov. Laura Kelly, a Democrat, in the Cabinet Room.

"In Arkansas, 80% of the Arkansas individuals have recovered with less than a 2% mortality," she said.

Nationally, the mortality rate is about 6%, according to the Johns Hopkins Coronavirus Resource Center.

Kansas has also made significant progress, she said.

"These two states have done exactly what we've asked them to do: find cases, contact trace, contain outbreaks and ensure that their citizens do as well as possible and that's what these states illustrate," she said.

During the meeting, Trump shifted his attention briefly from covid-19 to absentee voting, alleging that mail-in ballots are vulnerable to fraud.

"If people mail in ballots, there's a lot of illegality," Trump said.

Asked by Trump to weigh in, Hutchinson stressed the importance of ensuring that the person casting the vote is entitled to do so.

"In terms of the election in November, there's a lot of discussion about how we can make the vote accessible if there is continued worry from a health standpoint," Hutchinson said.

"We want to be able to use no-excuse [in-person early] voting as a way to do it, but it's still a person-to-person identification of the individual versus the mail-in variety that, as you said, can be manipulated," he said.

In an interview afterward with the Arkansas Democrat-Gazette, Hutchinson portrayed Wednesday's meeting as productive.

"It was a very good conversation both showcasing what we're doing but also learning some things as to how we can continue to partner together to fight this," he said.

"We have 60 different processing plants in Arkansas and all of them are operational and the industry has really taken it seriously to make the plants safer," Hutchinson said. "I wanted to assure him that we're fully committed to making sure Arkansas does its part in continuing to support the nation's food supply."

After the Cabinet Room meeting, the conversation continued in the Oval Office, Hutchinson said.

While there, he told the president that the hospitality industry needs more time to utilize the Paycheck Protection Program.

"I pointed out that it takes longer for the hospitality industry to recover," Hutchinson said. "The president indicated that he would look for a solution to that and I was very encouraged." 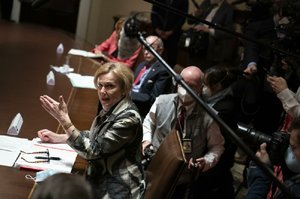