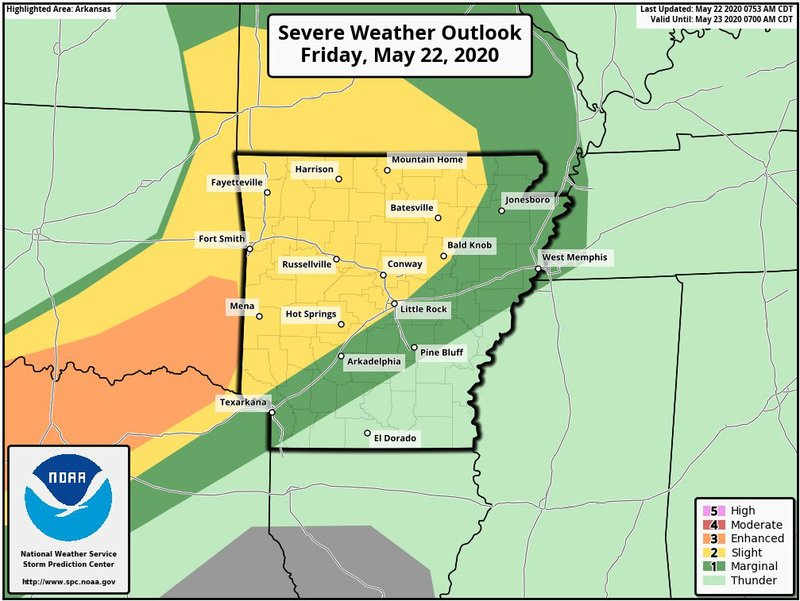 Strong storms are headed for Arkansas this afternoon and evening, bringing a slight chance for severe weather and kicking off what is expected to be a wet holiday weekend.

Meteorologist Jeff Hood said the storms were expected to begin moving into west-central Arkansas in the late afternoon Friday, bringing a slight risk for severe weather. The main possibility will be severe winds, though hail and isolated tornadoes are also possible.

The storms will continue across the state through the afternoon and evening, and the Little Rock area will be at a slight risk for severe weather, Hood said.

Those storms came on the heels of another system that moved across the state overnight Thursday into Friday. Thunderstorms produced by that system did not qualify as severe when they hit Little Rock, but lightning may have caused several fires in the area.

Little Rock Fire Department Capt. Doug Coffman said fire marshals have not yet determined the cause of several blazes overnight, but lightning is not being ruled out.

Even after the severe storms move out late Friday, wet weather is expected to continue in Arkansas.

The National Weather Service has rain in the forecast every day through at least Tuesday for most parts of the state.

Both Central and Northwest Arkansas have about a 20% to 40% chance for thunderstorms Saturday and Sunday, but on Memorial Day the chance increases to around 70%.

Much of southern Arkansas also has a chance for thunderstorms every day this holiday weekend.

The wet weather is nothing new for the Natural State, which has seen above normal rainfall totals so far this year.

Chris Buonanno, science and operations officer with the National Weather Service in North Little Rock, said Little Rock has seen around 7.5 more inches of rain than average for this point in the year. By comparison, at this time last year, Little Rock was 8.77 inches above average.