Trump maskless on tour at Ford 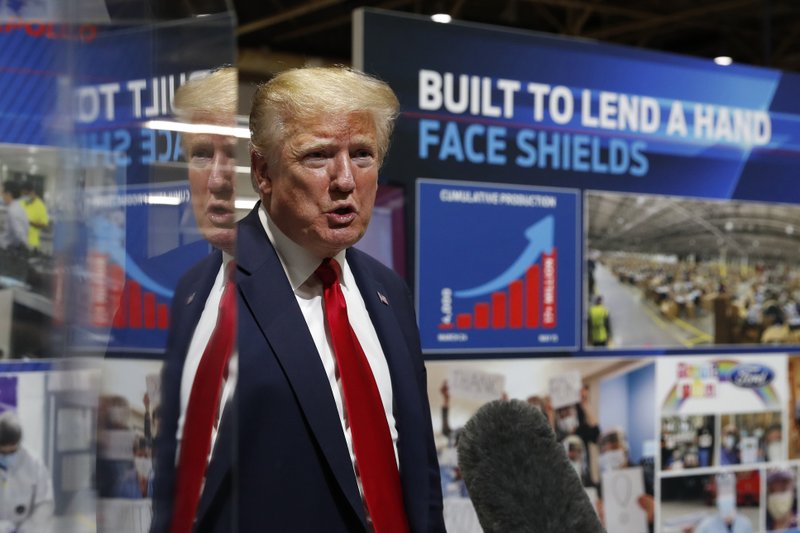 President Donald Trump speaks as he tours Ford's Rawsonville Components Plant that has been converted to making personal protection and medical equipment, Thursday, May 21, 2020, in Ypsilanti, Mich. (AP Photo/Alex Brandon)

President Donald Trump visited Ypsilanti, Mich., outside Detroit on Thursday to tour a Ford Motor Co. factory repurposed to manufacture ventilators, the medical breathing machines that governors were begging for at the height of the coronavirus pandemic.

In other news, the number of Americans applying for unemployment benefits in the past two months has swelled to nearly 39 million, the government reported Thursday, and Trump said guidance for churches to reopen is expected to be released today.

Trump's visit to Michigan occurred a day after he threatened to withhold federal funds over the state's expanded vote-by-mail effort. Again, the president did not publicly wear a mask despite a warning from the state's top law enforcement officer that a refusal to do so might lead to a ban on his return.

All of the Ford executives giving Trump the tour were wearings masks, the president standing alone without one. At one point, he did take a White House-branded mask from his pocket and claim to reporters that he had worn it elsewhere on the tour, out of public view.

"I did not want to give the press the pleasure of seeing it," Trump said.

For a moment, he also teasingly held up a clear shield in front of his face. A statement from Ford said that Bill Ford, the company's executive chairman, "encouraged President Trump to wear a mask when he arrived" and said the president wore it during "a private viewing of three Ford GTs from over the years" before removing it.

Michigan Attorney General Dana Nessel said that mask wearing isn't just Ford's policy but it's also the law in a state that's among those hardest hit by the virus. Nessel said that if Trump refused to wear a mask Thursday, "he's going to be asked not to return to any enclosed facilities inside our state" and "we're going to have to take action" against any company that allows it in the future.

The Republican president and Gov. Gretchen Whitmer, a Democrat, have clashed during the coronavirus outbreak. Trump on Thursday criticized Democratic governors, suggesting they were proceeding too slowly in reopening their states' economies.

In the early days of the crisis, Whitmer and other governors and medical workers clamored for ventilators, fearing a shortage of the machines would prove deadly as the virus made breathing difficult for the scores of afflicted patients taken to hospitals.

But the U.S. now has a surplus of the breathing machines, leading Trump to begin describing the U.S. as the "king of ventilators."

Whitmer did not accompany Trump during the visit.

"We do not have plans to meet, but I did speak with him yesterday on the phone," Whitmer told CBS This Morning on Thursday. "I made the case that, you know, we all have to be on the same page here. We've got to stop demonizing one another and, really, focus on the fact that the common enemy is the virus."

On Wednesday, Trump threatened to withhold federal funds from Michigan after its secretary of state mailed absentee ballot applications to millions of voters. Trump first tweeted that the Democratic state official had mailed absentee ballots. He later sent a corrected tweet specifying that applications to request ballots had been mailed and seemed to back off his funding threat.

Trump narrowly won Michigan in 2016. He insists mail-in voting is ripe for fraud.

"We don't want them to do mail-in ballots because it's going to lead to total election fraud," Trump said Thursday, But then he allowed for some exceptions, including for himself.

"Now, if somebody has to mail it in because they're sick, or by the way because they live in the White House and they have to vote in Florida and they won't be in Florida. But there's a reason for it, that's OK."

More than 2.4 million people filed for unemployment last week in the latest wave of layoffs from the business shutdowns that have brought the economy to its knees, the Labor Department said.

That raises the running total to a staggering 38.6 million, a job-market collapse unprecedented in its speed.

The number of weekly applications has slowed for seven straight weeks. Yet the figures remain 10 times higher than normal before the crisis struck.

"While the steady decline in claims is good news, the labor market is still in terrible shape," said Gus Faucher, chief economist at PNC Financial.

Across the U.S., some companies have begun to rehire their laid-off employees as states have eased restrictions on movement and commerce. On Monday, more than 130,000 workers at the three major American automakers, plus Toyota and Honda, returned to their factories for the first time in two months.

The latest figures do not mean 38.6 million people are out of work. Some have been called back, and others have landed new jobs. But the vast majority are still unemployed.

An additional 1.2 million people applied for unemployment benefits last week under a federal program that makes self-employed, contractor and gig workers eligible for the first time. But those figures aren't adjusted for seasonal variations, so the government doesn't include them in the overall number of applications.

Also on Thursday, the president said he had instructed health officials to put out reopening guidance for churches. Trump said he had discussed the issue with leadership at the Centers for Disease Control and Prevention.

Last week, a Trump administration official speaking on condition of anonymity said there were concerns about the propriety of the government making specific dictates to places of worship. And Roger Severino, director of the Office for Civil Rights at the Department of Health and Human Services, argued that "protections against religious discrimination aren't suspended during an emergency."

More than 5 million people worldwide have been confirmed infected by the virus, and more than 330,000 deaths have been recorded, including more than 94,000 in the U.S. and around 165,000 in Europe, according to a tally kept by Johns Hopkins University based on government data. Experts believe the true toll is significantly higher.

European countries also have had heavy job losses, but government safety-net programs in places such as Germany and France are subsidizing the wages of millions of workers and keeping them on the payroll.

Meanwhile, doubts are growing over plans by European governments to use contact-tracing smartphone apps to fight the spread of the virus as they ease their lockdowns. The apps can help authorities determine whether people have crossed paths with those who are infected.

British Security Minister James Brokenshire told the BBC that an app that was supposed to be introduced by mid-May is not ready, suggesting "technical issues" were to blame. Similarly, France delayed last week's rollout of its app because of technical problems and privacy concerns.

As for the search for a vaccine, drugmaker AstraZeneca said it has secured agreements to produce 400 million doses of a still experimental and unproven formulation that is being tested at the University of Oxford. It is one of the most advanced projects in the international race for a vaccine.

The Anglo-Swedish company reported it had received more than $1 billion from the U.S. Biomedical Advanced Research and Development Authority for development, production and delivery of the vaccine, starting this fall.

The investment will accelerate the development and production of the vaccine, AstraZeneca chief executive Pascal Soriot said. The company had already joined forces with the British government and is in discussions with the Serum Institute of India and other potential partners to increase production and distribution.

"We will do everything in our power to make this vaccine quickly and widely available," Soriot said.

NEW OUTBREAKS FEAREDAround the world, the effort to get back to business is raising worries over the risk of new infections, from hard-hit Milan, Italy, to meatpacking plants in Colorado and garment factories in Bangladesh.

In China, the leadership took extensive precautions as it prepared for the opening of its long-postponed National People's Congress today in Beijing. An outbreak there could be a public relations nightmare as President Xi Jinping showcases China's apparent success in curbing the virus that first emerged in Wuhan late last year.

Severe Wuhan-like lockdown measures are being taken in Shulan, a city in China's northeast. Apartment complexes have been sealed off, confining residents inside, and teams of government workers go door to door rounding up sick people.

The forceful response reflects fears among China's leaders about the potential for a fresh wave of infections as factories, schools and restaurants reopen across much of the country and the government touts its success in fighting the virus on the global stage.

The latest outbreak is concentrated in Jilin, a northeastern province of 27 million people that sits near China's borders with Russia and North Korea. Jilin has reported a small outbreak of about 130 cases and two deaths, but experts there have warned of the threat of a "big explosion."

Officials have already mobilized police and Communist Party groups to make sure residents comply with the lockdown.

Authorities have also imposed a lockdown on parts of Jilin city, a manufacturing base, bringing factories to a standstill and quieting streets. 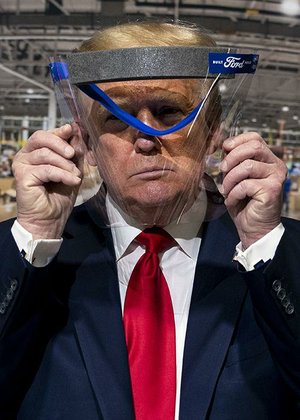 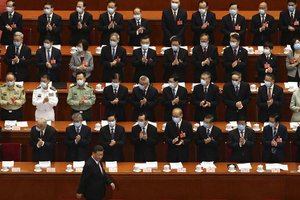