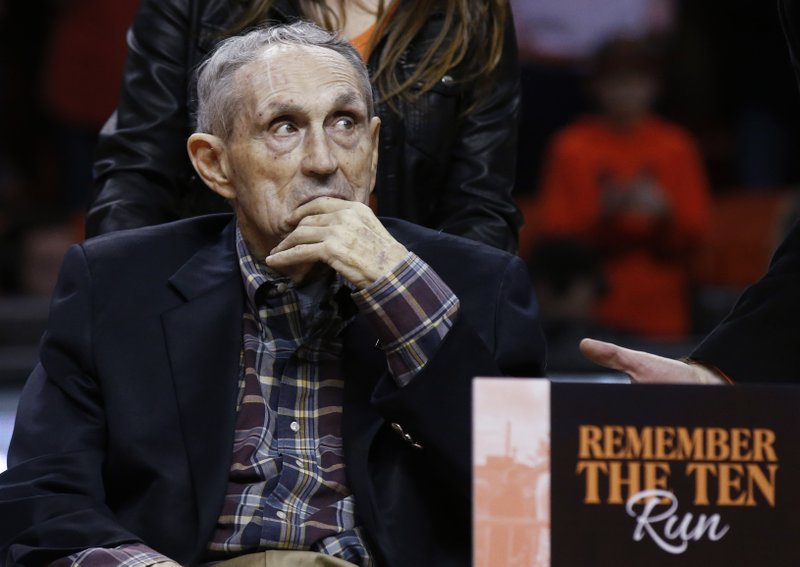 Former Arkansas basketball coach Eddie Sutton is pictured on Jan. 20, 2018, on the court at Oklahoma State in Stillwater, Okla. Sutton, who coached for 36 years at the Division I level, was part of a nine-person group announced Saturday, April 4, 2020 as this year's class of enshrinees into the Naismith Memorial Basketball Hall of Fame. - Photo by Sue Ogrocki of The Associated Press

FAYETTEVILLE — Eddie Sutton, who built the University of Arkansas basketball program into a national power and won more than 800 career games as a college coach, has died at age 84.

Sutton died on Saturday in Tulsa, multiple sources confirmed to the Arkansas Democrat-Gazette, after being in hospice care. His death comes less than two months after he was elected to the Naismith Memorial Basketball Hall of Fame on April 3.

Arkansas had made one NCAA Tournament appearance — in 1958 — during the 25 years before Sutton was hired as the Razorbacks’ coach for the 1974-75 season.

By the time Sutton left Arkansas after 11 seasons to take the Kentucky job, he had transformed the Razorbacks into a national power.

“This state is always going to be indebted to Coach Sutton, because he put Arkansas on the map basketball-wise,” said Darrell Walker, coach of the University of Arkansas at Little Rock and an All-American guard for the Razorbacks in 1983 as a senior.

Arkansas was one of four programs Sutton led to a combined 25 NCAA Tournament appearances along with Creighton, Kentucky and Oklahoma State. He had two Final Four teams at Oklahoma State — his alma mater — in 1995 and 2004.

“Coach Sutton won everywhere he went because he was a great teacher of the game,” Walker said. “All the things that he taught us, I’m teaching my guys right now.”

Sutton’s overall record in 37 seasons as a Division I head coach was 806-326, including a 6-13 mark at the University of San Francisco during the 2005-06 season when he served as the Dons’ interim coach.

Marvin Delph, one of the famed “Triplets” on the 1978 Final Four team along with Moncrief and Ron Brewer, said most college teams today are lacking in the fundamentals the Razorbacks perfected under Sutton.

“Obviously, you’ve got to have talent to win, but Coach taught us things that some of these kids playing today don’t have a clue about, that are a lost art,” Delph said. “If you were on offense and somebody was coming to set a screen, he taught us how to use that screen. If you were on defense he taught you how to counter that screen.

Sutton, who came to Arkansas from Creighton, played at Oklahoma State for Henry Iba and like his college coach had a system that stressed defense and taking high percentage shots. His core principles — printed on the players’ practice jerseys and shorts — were discipline, dedication and defense.

“Eddie’s tenacity and his work ethic were top notch,” said Pat Foster, an Arkansas assistant under Sutton who became the coach at Lamar, Houston and Nevada. “He had full command of the system that he was teaching.

Jim Counce was Sutton’s first signee at Arkansas in the spring of 1974. He became a starting forward during the 1976-77 and 1977-78 seasons when the Razorbacks were a combined 58-6 and then was an assistant coach at Arkansas before going to medical school.

“I was only 22 years old when I was an assistant coach and I’d be out on the road recruiting with a bunch of other coaches, and when they talked, I’d listen,” Counce said. “After listening to them for a while, I thought to myself, ‘No wonder we’ve been beating your butts all these years. Y’all don’t know anything compared to what Coach Sutton knows about basketball.’

“They always talked about how lucky Eddie Sutton is. I’d think, ‘He’s not lucky, he just knows how to coach the game.’ Coach Sutton was the best.”

Joe Kleine became an All-Southwest center for the Razorbacks in 1984 and 1985 after transferring from Notre Dame. He said he transferred to Arkansas because of his positive feelings about Sutton during the recruiting process when he was a high school star in Slater, Mo.

“Everybody was telling me how great I was, and Coach Sutton looked at me in my living room and said, ‘I’m almost sure we’re going to offer you a scholarship, but I can’t offer it to you until I see you play,’ ” said Kleine, who played 14 seasons in the NBA. “To me, that made a lot of sense.

“He didn’t kiss my butt, and I liked that. I knew that if I went to Arkansas, he’d have my best interest at heart.”

Counce said Sutton gave the players supreme confidence with how he prepared them in practice and then with his calmness during games.

“I can tell you in the last two minutes of a game when there was a timeout and you were in the huddle listening to him, there was a feeling that he knows more than the guy on the other end of the floor knows,” Counce said. “It’s wasn’t just all that he said or all that he knew, but it was his demeanor, his attitude, the amount of time you spent with him in practice.

“We won a lot of close games, and a lot of that was because of the great players we had. But it also was because of the confidence we had in Coach Sutton. He convinced us that we were always going to win at the end of the game. That was part of the ‘It’ factor he had.”

“I think Eddie is one of the top five college coaches of all-time,” Foster said. “How could you do better?

“Eddie had everything. He knew the game and how to teach it. He knew how to treat his players and get the best out of them. He knew how to handle the media and the fans and boosters.”

Sutton’s former players said he taught them about life as well as basketball.

“That was one of the great lessons he taught me that I still apply to this day.”

U.S. Reed was a three-year starter for the Razorbacks and is best known for hitting a half-court shot that beat Louisville 74-73 in the 1981 NCAA Tournament.

“Coach Sutton taught us life skills and how to grow up and be men,” Reed said. “That’s one of his biggest legacies. He was a father figure and we all respected him.”

Kleine said that along with his parents, Sutton was responsible for “everything I have and helping me become the man that I am.”

Sutton coached his players hard, Kleine said, but without a lot of yelling, and also praised them.

Moncrief said Sutton’s teams were consistently good because he could adjust to his players’ strengths.

“A lot of people think Coach Sutton was an eight or nine passes a possession type of coach, and he was that when he had to be,” Moncrief said. “Remember, when he first got to Arkansas, the talent pool was not as great, so they were more deliberate.

“But when he had horses that could get it done, we were scoring 70 and 80 points without a three-point line and a shot clock. Think about that.

“So he allowed his players to use their skill set, and he didn’t hold you back offensively. If you could get it done, he let you do it.”

Sutton likely would have stayed at Arkansas longer than 11 seasons, but he developed a drinking problem — which wasn’t common knowledge at the time — that led to a feud with Athletic Director Frank Broyles, who wanted him to seek treatment.

When the Kentucky job opened with Joe B. Hall’s resignation after the 1984-85 season, Sutton left Arkansas to become the Wildcats’ coach. He angered many Arkansas fans at the time by saying he would have “crawled to Kentucky.”

Sutton apologized for that comment numerous times in later years and said it was directed at Broyles, with whom he again became friends. They sat together at the final game in Barnhill Arena on March 3, 1993, when Arkansas beat LSU 88-75.

“Eddie is a very good friend and I have great admiration and respect for him,” Broyles said at the time. “Our basketball program had been down for a number of years before he came here, and he turned it around, had great success and built a foundation for years and years to come.”

Sutton often talked fondly of his days at Arkansas.

“The years we were there, we had about as much fun as any place I’ve ever coached,” Sutton said during the 2003-04 season before his Oklahoma State team beat Arkansas in Walton Arena. “I cheer for the Hogs every time they play, except when we have to play them.”

Sutton was 4-0 against Arkansas as Oklahoma State’s coach.

“You always want to win, but I wouldn’t say I take extra satisfaction in beating Arkansas,” Sutton said. “I know how painful it is to the fans of Arkansas when they lose a game, and some of those fans are good friends of mine.”

Sutton led Kentucky to three consecutive NCAA Tournaments, then resigned under pressure after the 1988-89 season when the Wildcats were 13-19 and being investigated by the NCAA for recruiting violations.

The NCAA didn’t name Sutton in any of its violations and after sitting out a year and undergoing treatment for alcoholism, he returned to Oklahoma State as coach and revived a program that had been to the NCAA Tournament once in the previous 26 years. He led the Cowboys to the NCAA Tournament in his first season — and 12 other appearances — and finished with a 370-149 record in 16 seasons.

Sutton and the Oklahoma State program endured tragedy during the 2000-01 season when two players, six staff members and two pilots were killed when their private plane crashed returning home after a game at Colorado. Sutton called all of the families of every person killed.

“I’ve had some tough experiences in my life, but that was the toughest thing, when I got a call and was told that plane had gone down, and everybody was gone,” Sutton said in 2011 on the 10th anniversary of the crash. “Not a day goes by that I don’t think about every one of those guys, because they were all great people.”

Sutton had a relapse in his fight with alcoholism and took a leave of absence from his coaching duties at Oklahoma State in February 2006 after he was involved in a car accident that resulted in charges of aggravated driving under the influence, speeding and driving on the wrong side of the road. He pleaded no contest to the charges and received a one-year deferred sentence and was ordered to pay a fine.

After the accident Sutton underwent treatment for alcoholism and had surgery to relieve pain in his back and hip. He resigned at Oklahoma State’s coach after the season.

“We all know it was documented that Coach Sutton had some problems,” Walker said. “He was human just like anybody else.”

Oklahoma State named the court at Gallagher-Iba Arena in Sutton’s honor in 2005. Arkansas honored him in 2016 by raising a banner for him in Walton Arena.

Sean Sutton, Eddie’s son who succeeded him as Oklahoma State’s coach and is now an assistant coach at Texas Tech, was among the family members in Walton Arena for the banner ceremony.

“’I think my dad still thinks of Arkansas kind of as his baby,” Sean Sutton said at the time. “He went there when Arkansas hadn’t had much success. He was fortunate the ‘Triplets’ came along when they did. He was able to get all of those guys and that really changed the landscape of Arkansas basketball.

“He’s always looked back with a lot of pride on what they were able to do as a basketball program. If he had it to do all over again, I don’t think he would have left Arkansas for Kentucky.

“He has a great deal affection for the people of Arkansas. I think he’s really humbled and honored about being asked to come back.”