Shrum looking forward to another chance 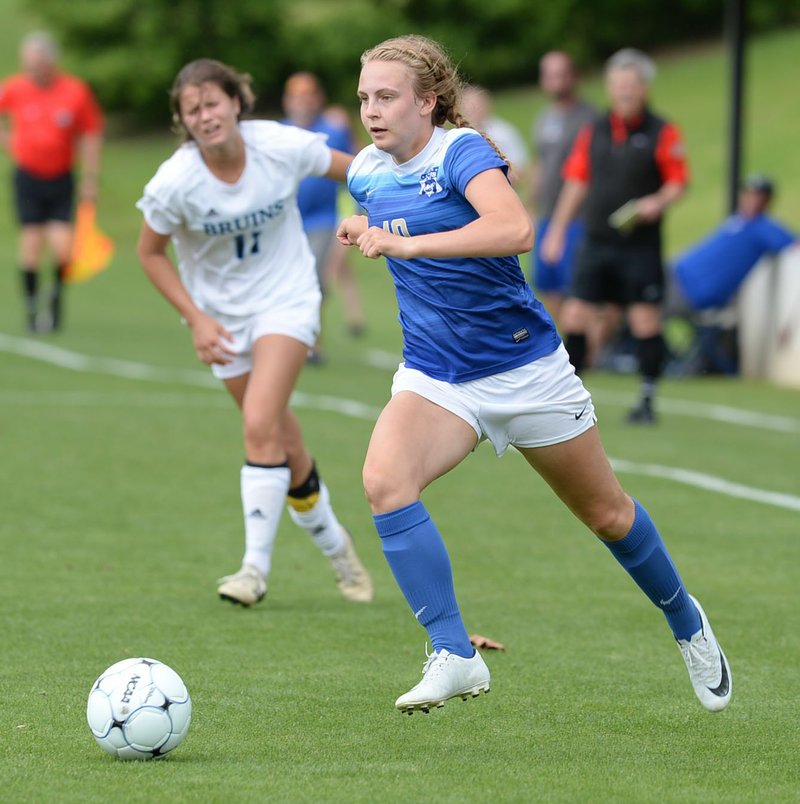 Sydney Shrum (right) led Harrison to a Class 4A state girls soccer championship in 2019. Shrum’s junior year got off to a rough start when a stress fracture in her foot kept her off the basketball court until Feb. 4, then the coronavirus pandemic ended her soccer season after four matches. (NWA Democrat-Gazette/Andy Shupe)

Sydney Shrum is happy she gets one more chance.

The coronavirus pandemic cut short what she was hoping to be another run at a state soccer championship for her Harrison Lady Goblins.

CHALK TALK Earned state tournament MVP honors as a sophomore to help the Lady Goblins win their third state title in four years. … Earned All Arkansas Preps honors, finishing with 20 goals and 10 assists in 25 matches as a sophomore. … Overcame a stress fracture in her left foot to help the Lady Goblins basketball team to a state quarterfinal appearance this year. … Got off to a good start with 3 goals and an assist in four matches this season for the Lady Goblins soccer team before concerns from the covid-19 pandemic shut down high school sports in the state.

The 27th in a series recognizing some of the state’s best spring high school athletes who had their seasons canceled by the coronavirus pandemic.

"When I first heard, I was very disappointed," Shrum said. "I know I have a year left, but I really felt for those seniors. I'm definitely excited to have one more season left to play, and now I know I won't take anything for granted."

As a sophomore last year, Shrum led Harrison to the Class 4A title and was named tournament MVP. She finished with 20 goals and 10 assists for the season, including two goals in the 5-2 win over Pulaski Academy in the state finals.

Harrison soccer Coach Chris Pratt said this year's team could have been even stronger offensively.

Shrum was switched from forward to center-mid, which could have been done last year, Pratt said.

The switch was no problem for Shrum. He likened it to playing guard in basketball, which she did very well, too.

"You gotta have soccer IQ and critical-thinking skills, and she definitely matched up with all those," Pratt said. "She can cover a lot of ground. She's a good athlete. It make sense to move her there this year."

The beginning of Shrum's athletic season got off to an auspicious start, too.

She found out she had a stress fracture in her left foot after the benefit game in basketball, which sidelined her until the second half of the season.

"Personally, it was kind of an up-and-down kind of year for me," Shrum said. "It was the first time I had anything like that. It was so hard to sit and watch."

She returned Feb. 4 against Berryville, just six games from the end of the regular season.

"I played more than I expected," Shrum said. "It was still super tight. But the next week, it was back to normal."

Shrum led the Lady Goblins to the state quarterfinals, where they lost to Pulaski Academy. She switched to a Lady Goblins' soccer uniform the next day.

The change in sports didn't come without trepidation.

"It's a little tougher transition with my foot and all," Shrum said. "I was a little nervous to kick it. But once I started running around I had no problems.

"I think we had a pretty good shot this year [at winning a state title]. We just have to come out next year and be even better than we could have been this year."

She said she doesn't have a favorite between basketball and soccer. They are just different.

"Soccer is a lot less stressful than basketball," Shrum said. "It doesn't matter who scores. In basketball, I was more of a leader, set up plays, run the court."

Shrum didn't think she would score as much after moving to the midfield, but Pratt disagreed.

"She probably would have scored more," Pratt said. "She's got a strong shot from the outside."

"I don't think they are so different," Pratt said. "She handles her role as a guard well. It suits her for playing center-mid. She handles any role well, really. She'll do whatever it takes.

"Going from forward to mid, she's a little more of a facilitator."

Pratt believes Shrum can play at the collegiate level in either basketball or soccer.

"She's a special kid," Pratt said. "She's one of the better ones to come through this program, but does it in a real quiet way. She does things and doesn't make a big deal out of it."

Shrum said she's considering a career in the medical field, which could play a part in her decision to play college sports.

Photo by Andy Shupe
NWA Democrat-Gazette/ANDY SHUPE Harrison's Sydney Shrum (right) dribbles the ball ahead of Pulaski Academy's Savannah Goodwin Monday, May 20, 2019, during the Goblins' 5-2 win in the Class 4A state championship game at Razorback Field in Fayetteville. Visit nwadg.com/photos to see more photographs from the game.

But with the pandemic, she's looking forward to her senior season first.

"I want to soak up every moment," Shrum said. "You never know when it's going to be your last, like the seniors this year."

Print Headline: Too much sitting during junior year