Covid in the classroom

Brian Primack, dean of the College of Education and Health Professions at the University of Arkansas, Fayetteville, during a 2014 TEDMED talk on how principles learned from video game design can be used to create effective changes in health behavior. (Courtesy Brian Primack)

With nearly 100,000 people dead from covid-19, there are moments when it becomes difficult to turn away from the constant barrage of pandemic-related news and social media posts.

From stories of victims and survivors to polarizing memes; from Twitter fights, Facebook rants and carefully curated Instagram stories to conspiracy theories and items that are misleading or flat-out false, the information that arrives constantly on the glowing screens of our phones and other devices can be both enticing and overwhelming. (Yes, we are aware of the irony of adding to the information overload by writing about the information overload.) On May 18, Brian Primack, dean of the College of Education and Health Professions at the University of Arkansas, Fayetteville, gave an online lecture titled “Media, Perception, and Behavior” to the UA’s Honors College class.

The lecture was part of “Pandemic,” an 11-part course that featured several instructors from different disciplines lecturing via video on pandemics of the past, China, the economic impact of the current pandemic and other subjects. The course ended May 22 with a lecture from Gov. Asa Hutchinson about Arkansas’ reaction to covid-19.

Videos from each session can be seen at honorscollege.uark.edu/programs/honors-college-seminars/forums/pandemic.php.

Primack, 51, a former family doctor, came to Fayetteville in July after nearly 20 years at the University of Pittsburgh, where he was named dean of the Honors College in 2017 and was founder and director of its Center for Research on Media, Technology and Health.

At Pitt, he did extensive research on tobacco use and e-cigarettes. He also researched social media and its effects on health and has published numerous studies on the effects of social media use on sleep, depression and eating concerns among young adults.

Lynda Coon, dean of the UA Honors College, was happy to have Primack speak to the class.

“We wanted to zoom in on the pandemic through a multi-disciplinary lens, and Primack is perfect,” she says. “He sits at the center of medical knowledge and public health and social media. I think his work on the effect of social media on public health is exceptionally innovative and pioneering.”

During his nearly 90-minute lecture, Primack talked about some of the public health concerns of the covid-19 pandemic such as how quarantining has resulted in less air pollution in Wuhan, China, which could lead to fewer pollution-related deaths.

And then there are studies related to possible increases in deaths during the pandemic related to the economic crisis, anxiety, depression and social isolation.

He also touches on the subject of loneliness and how it can adversely affect health. He brings up a pre-pandemic article by former U.S. Surgeon General Vivek Murthy about reducing isolation at work and getting people more connected.

Of course, during the pandemic, we are supposed to socially distance ourselves, though Primack suggests a change in terminology.

“A more correct term … is ‘physical distancing,’” he says. “We don’t want to socially distance. We want to physically distance so that we are not passing germs to each other, but we need to stay socially connected.”

Turning to the effects of media, he cited a 2002 study in The Journal of the American Medical Association about post-traumatic stress disorder after the Sept. 11, 2001, terrorist attacks.

The study found there were more people with PTSD from watching television coverage of the events than people who were directly affected by the attacks.

During a phone interview from his office in the Graduate Education Building a few days before his lecture, Primack talked about the difficulty of maintaining a balance in the flow of information.

“There is a real tightrope we have to walk here. We need to be informed, and we need to inform each other about what is going on with this pandemic … but on the other hand, if you go overboard, sometimes the amount of information can take a toll on its own.”

“I was interested in a lot of different things,” he says, with a hint of understatement.

Born in New York City, he spent his earliest years in Uganda where his father, Aron, an oncologist, worked for the U.S. Public Health Service.

His family — which includes mom Karen, who is now a retired civil rights and child protection lawyer, and younger sister Gretchen, a poet — fled the country when Brian was 6 after Idi Amin came to power. They settled in Silver Spring, Maryland.

After high school, Primack went to Yale University and majored not only in English literature, but also mathematics.

“The math wasn’t even practical,” he says with a chuckle. “It was abstract, more philosophical mathematics. I took a bunch of courses in philosophy, medieval history; I was like a kid in a candy shop, learning as much as I could.”

After graduating in 1991, he returned to Africa to teach junior high English and P.E. at the International School of Niamey in Niger.

He came back to the United States and earned a master’s degree in education, human development and psychology from Harvard University in 1993 and taught remedial mathematics at the University of Maryland. (He was also acting on the side and was part of a professional improv comedy group called Psychochuckles.)

His Maryland students were those who needed to be brought up to college-level math, and Primack discovered that they “often had a block of some sort … sometimes it was the material, but often it was psychological. They had been scarred from mathematics at an early age.

“What I loved about the job was that it was about mathematics, but it was also about psychology and getting people confident and making them feel that these ideas were relevant to their lives.”

Ever curious, and inspired by working with his remedial math students, Primack became interested in clinical psychology.

A mentor suggested enrolling in medical school to study psychiatry, so Primack headed for Emory University in Atlanta in 1995. Instead of becoming a psychiatrist, however, he ended up in family medicine.

“You deal with all those medical things I had become interested in, but you’re also dealing with the whole family and family dynamics and the emotional aspects of illness,” he says of the switch.

One of the reasons the former English major wanted to come to Arkansas, he says, was his love of Southern literature.

Matt Waller, dean of the Sam M. Walton College of Business at UA and one of several instructors who presented a May 21 session in the Pandemic course on the supply chain, first met Primack last year.

“He’s more of a Renaissance man than anyone I know,” Waller says. “My wife and I went to his home for lunch one day, prior to the pandemic. He made these wonderful vegan dishes … and he and his son had made their own video games using a homemade computer, and they are all musicians.”

In his Honors College lecture, Primack talks about the “infodemic” around covid-19 that includes the avalanche of dubious information shared on social media, not just from our friends and neighbors, but celebrities with large followings.

“The difficulty of trying to separate fact from fiction is very hard these days,” he says during our interview. “It’s easy for information to seem credible when it just isn’t. It’s easy for people to propagate something on social media that hasn’t been vetted, but in the court of popular opinion if you see something has gone viral, you assume it must be correct.”

In his lecture, he references tweets by actor Woody Harrelson and rapper Wiz Khalifa about an unfounded connection between 5G cellphone towers and the spread of covid-19.

“It’s been proven scientifically that radio waves cannot influence viruses,” he says during the lecture. “But these tweets get re-tweeted and this is part of that infodemic.”

There are people opposed to vaccination that believe covid-19 is a conspiracy to have people vaccinated and microchips implanted into them so they can be followed.

“There is a lot of very strange information out there,” Primack says.

He also cites a recent survey that found that 30% of people believe that the novel corona-virus that causes covid-19 was created in a Chinese laboratory.

“That has been proven false because of the unique DNA makeup of this particular virus, but that is still something that people continue to believe,” he says. “That kind of thing can lead to hostility, it can lead to ignorance, it can lead to all kinds of things that are not going to be positive moving forward.”

And he addresses the story of Montana physician Annie Bukacek, who is featured in a viral video and who claims, among other things, that death rates reported during the pandemic have been inflated.

Adding to the flow of sketchy information is the realization that what we know now might not even be relevant next year, next month or even next week.

“No information is absolutely perfect,” he says during our interview. “We’re still figuring this out. We had to jump and build our wings on the way down.”

He compares it to something he learned when he was just starting medical school.

A professor told him and the other eager new students that, “unfortunately, over the next four years, about 50% of what we teach you is wrong. But we don’t know what 50% it is. You will have to become good at learning this information, and even better at being able to adapt to new information and understanding that not everything is written in stone.”

During the pandemic, Primack says, “we need to be informed but, just like my professor said, we also need to be really good at adapting to new information and integrating that and not just playing the blame game.”

It’s no surprise that many of us spend so much time scrolling the feeds on our devices. Companies worth billions of dollars have designed social media to keep us on their platforms, Primack says, and they are very good at their job.

“It makes sense that one of our natural inclinations is going to be a little bit overloaded.”

So what’s a person to do with this avalanche of information?

In his lecture, Primack points out recommendations from the World Health Organization like minimizing overload, seeking information from only trusted sources and only looking for news updates once or twice a day and avoiding getting trapped in a constant flurry of news reports.

“The problem,” he tells the class, “is that today those reports are everywhere.”

Still, stepping back and resisting the urge to repeatedly dive into the nonstop stream of data is the best way to avoid being swept away, he says. 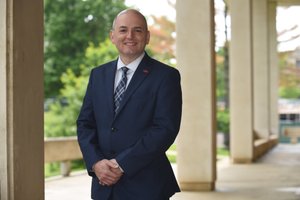 Brian Primack, dean of the College of Education and Health Professions at the University of Arkansas, Fayetteville, has done extensive research into the effects of social media. On May 18, he gave an online lecture titled "Media, Perception, and Behavior" to the school's Honors College. (Arkansas Democrat-Gazette David Gottschalk)

“Social media in itself isn’t necessarily a good or bad thing. It’s a tool. It can be a way that we get good information and connect with each other, but it can be a source of misinformation and too much information … the sheer volume of it is sort of dragging us through these oscillations of information that we don’t need to be dragged through every two minutes. It’s probably enough to check in once a day, or even once every couple of days to find out what’s going on.”

Print Headline: Covid in the classroom