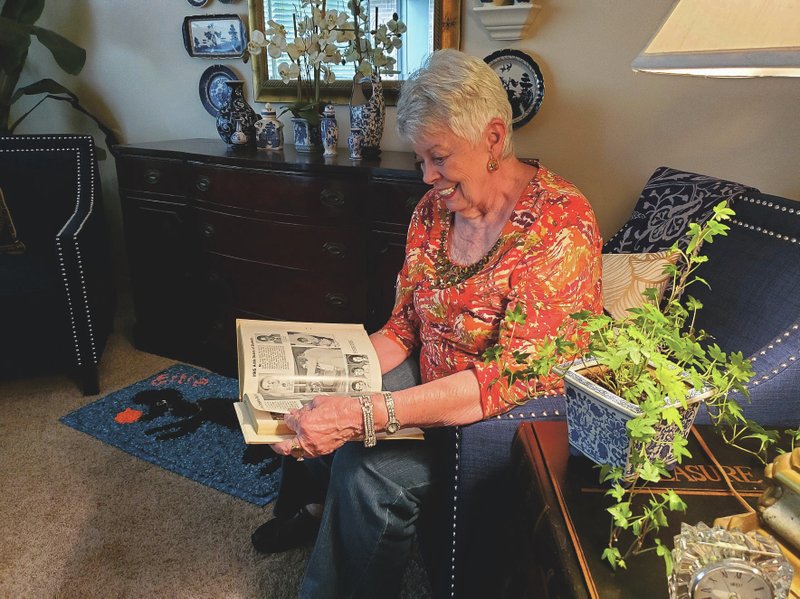 LITTLE ROCK -- In the mid-1960s, miniskirts were in vogue, protests against the Vietnam War were rampant, and the civil rights movement was making headway under the leadership of Martin Luther King Jr.

It was at that time -- the week of Jan., 17, 1966, to be precise -- the new John L. McClellan High School opened on Little Rock's southwest outskirts. About 900 students and 50 staff members packed their cars and trucks with belongings and school equipment from what was Mabelvale High School and trekked to the new place at 9417 Geyer Springs Road.

The new 1,200-seat high school was built and furnished by the Pulaski County Special School District for about $1.6 million.

The single-story, tan brick and metal-paneled school was windowless but air conditioned -- the first high school in Pulaski County to be mechanically cooled, according to news accounts at the time, which also described the campus as one of the most modern campuses in the nation.

Flash forward 54 years: The Little Rock School District, which had by 1987-88 acquired both McClellan and J.A Fair high schools under a federal appeals court order in a school desegregation case, is permanently closing the two high schools this spring and replacing them with the new $100 million Southwest High School opening in August on Mabelvale Pike.

The J.A. Fair building that opened in 1982 will remain intact and is to become a kindergarten-through-eighth-grade campus, possibly as soon as the 2021-22 school year, to replace Henderson Middle along with Romine and David O. Dodd elementaries.

In contrast, most of the McClellan campus is to be demolished -- with the empty site to someday become an elementary and middle school when the district can afford it.

The two high schools are being shuttered at the end of a school year in which students statewide were abruptly sent home in mid-March, never really to return -- all in an effort to contain the spread of the coronavirus.

The lack of any official farewells to the McClellan campus, in particular, hasn't stopped some who knew the school well -- either recently or in the past -- from sharing some recollections and observations about the home of the Crimson Lions.

"My memories are all good," former teacher Susie Minton Roberts recently said of her McClellan colleagues, students and the time she spent at the school. "I can't bear to think of it being torn down," she said.

Roberts was one of the teachers who made the all-in-one-winter-day move from Mabelvale High to the new McClellan, which was named for the state's senior U.S. senator at the time.

As the school's journalism teacher for about 10 years, Roberts and her students established the Lion-Up, an often award-winning school newspaper.

Her students, she remembered, interviewed and wrote about "every important person who came to town," including movie stars and politicians such as McClellan, who dedicated the new school in May 1966 and signed the diplomas of all of the approximately 300 graduates that year.

"You've made an old man very happy," McClellan was quoted in a local newspaper as telling students.

Roberts recalled the student pranks -- such as the year the seniors lost their marbles. At graduation, each senior handed a school dignitary a marble when they received their diplomas, leaving solemn school and district leaders struggling onstage to discreetly fill their pockets.

She ticked off the names of former colleagues and students, and the numerous awards for McClellan, and said she considered McClellan the premier school in the Pulaski County Special School District for its academic and athletic prowess.

Porter, who graduated in 1978, said he was bused from the predominantly black College Station community where he lived to Cloverdale Junior High and McClellan High.

"When I arrived at McClellan High School during the 1975-1976 school year, it was 90% white and 10% black, with about 1,200 students. During my 10th-grade year, I was called upon by the administration to quell racial tensions, which we were able to do."

Porter said for the most part his experience at McClellan was "great" and he made many good friends with whom he recently celebrated his 40th-year class reunion.

"I served as student body vice president during the 11th and 12th grades, with my great friend Dana Cobb as president," he recalled. "I also was in the choir for three years. The choir had an annual musical production called the "Sounds of Now," where we sang some of the top songs of that time.

"We did not have an auditorium at the time, so it was done in the gym, which was packed each night for the performances. I was the leader of a group that performed "Sweet Love" by the Commodores one year, and we also did a song by Earth, Wind & Fire. I also did a duet with a female choir member and we sang "The Closer I Get To You" by Donny Hathaway and Roberta Flack. However, we had to practice social distancing during the song due to our racial diversity."

Porter said his 11th-grade school counselor helped him achieve his goal of becoming a lawyer -- by looking at him and looking at his less-than-stellar grades and advising him to find a career where he could work with his hands.

"She was able to see that I became a lawyer, and I thanked her for motivating me," he said.

"We had great teachers -- Ms. Susie West, Ms. Virginia Abrams, Ms. Charlene Trotter," Porter said. That was a sentiment echoed by other alumni. Phyllis Smith, Beverly Billingsley, Martha Humbard, David DeArmand, Greg Morrison and Renita Wilbon were just a few of the many others mentioned.

Some McClellan faculty members went on to leadership positions elsewhere.

Jim Rollins has had a long career as superintendent of the Springdale School District. Greg Murry, now superintendent in Conway, is a former music teacher at McClellan. Harry Thomason coached and taught at McClellan before he went to Hollywood to be a producer and director. State Sen. Joyce Elliott, a longtime English teacher, is running for the U.S. Congress.

Mike Malham recently retired as Cabot's longtime head football coach. Ellis "Scooter" Register was the head football coach at El Dorado, Catholic High and Central High. Sam Stueart had been president of the Arkansas Education Association teacher union and went on to be a principal and an assistant superintendent in the Little Rock district. John Bacon is the chief executive officer of the eSTEM Charter Schools Inc.

Jeffrey Haslauer, now of Cabot, made himself at home in McClellan's theater and music departments before graduating in 1984 with a scholarship in the field.

"As far as the fine arts goes, that was the place to be," he said of the school that in the 1980s produced a number of leaders in different fields -- award-winning musicians Chris Maxwell and the late Joe Cripps; Boston University professor and ancient Greek historian Loren J. Samons II; the late Han Chan Choi, who was a policy adviser to then-Gov. Bill Clinton and later an Atlanta attorney and advocate for Asian-Americans; and Grant Phillips, president of the REI Automations of South Carolina, which has been listed as one of the nation's fastest-growing companies.

"When I look back -- the talent was there -- but what if they weren't nurtured by the teachers? Would they have grown into the people they are now?" he asked.

McClellan was distinguished by its 90-minute noon activity period, Haslauer said, during which all students -- sophomores, juniors and seniors alike -- were free to leave campus for a lunch out or to participate in clubs or other activities at school.

"That kind of freedom you can't even imagine right now. It was wonderful," he said." I didn't use it for bad. It was great. We were treated like young adults. Everyone got back at 12:30 or 1 p.m., and then went on with their day."

Antwan Phillips, an attorney running this year for election to the Little Rock Board of Directors, routinely boasts of McClellan in his speeches and public service activities. He is a co-founder of the Friends and Alumni of McClellan Foundation, a 3-year-old, nonprofit organization that gives scholarships to McClellan graduating seniors to be used as they see fit for "real world expenses." The McClellan awards will continue for seniors at the new Southwest High, he said.

One of Phillips' strongest memories of McClellan is of being a senior and walking into a morning class to see his teacher crying as she watched New York City's World Trade Center towers fall in terrorist attacks in September 2001.

In the classroom discussions in the hours and days that followed, "I grew up," Phillips said. "I realized the world was bigger than me. I became cognizant of the world beyond Antwan. My world view changed. That time at McClellan with those people helped that happen."

McClellan's enrollment grew rapidly in that first decade of operation, to more than 1,800 in grades 10-12, making it necessary for the two main parallel halls -- separated by the media center, cafeteria and open-air courtyards -- to be made one-way for student traffic.

"If your locker was at the wrong end, you had to make the circle to get back to your locker," Roberts said, adding faculty members had to stand in the halls to police the flow.

Over time, McClellan has been home to a business education and communications magnet program to attract students from across Little Rock and even Pulaski County. There was a community school initiative that provided health services, as well as a range of evening and weekend courses in financial planning, computer technology and other subjects for adults in the surrounding neighborhoods.

McClellan High had the top high school business education program in the nation in 1995 and 1999, selected by a division of the American Vocational Association. The awards were in recognition of the school's up-to-date computer systems and its 35 courses in fields such as fashion merchandising, retailing, food production and management, economics, entrepreneurship and business finance.

Amiya Mardis was the student body president at McClellan this school year. She is planning to attend Harding University to study criminology and psychology with plans to become a therapist or a lawyer.

She also plans to keep in touch with classmates with regular school reunions she intends to organize.

"I want people to know that McClellan was about the students," Mardis said. "McClellan's reputation was not always good, but there were a lot of intelligent students, and there were teachers who were willing to help each of us, give us all a chance."

Ritu Shekhawat, an award-winning Advanced Placement chemistry and environmental science teacher at McClellan High, was recently sorting and packing up her collection of material to be moved to Southwest High, where she will rejoin a former McClellan principal, Marvin Burton, who is the leader at the new school.

McClellan is the only place she has taught other than in her native India. She was working on a Ph.D. program in chemistry at the University of Arkansas at Little Rock in 2006 when she was recruited in mid-school year to McClellan. Since then, she has resisted encouragement to move to other schools.

"I have had a lot of great colleagues here. I've always felt at home at McClellan," she said. "God placed me here for a reason."

But Shekhawat said it is time for change.

"We're definitely not up to par for a 21st century education," she said "We need a new building, a new environment for the kids. We are getting a new school. These kids will be in a new building with state-of-art technology and labs -- new science labs are most important to me."