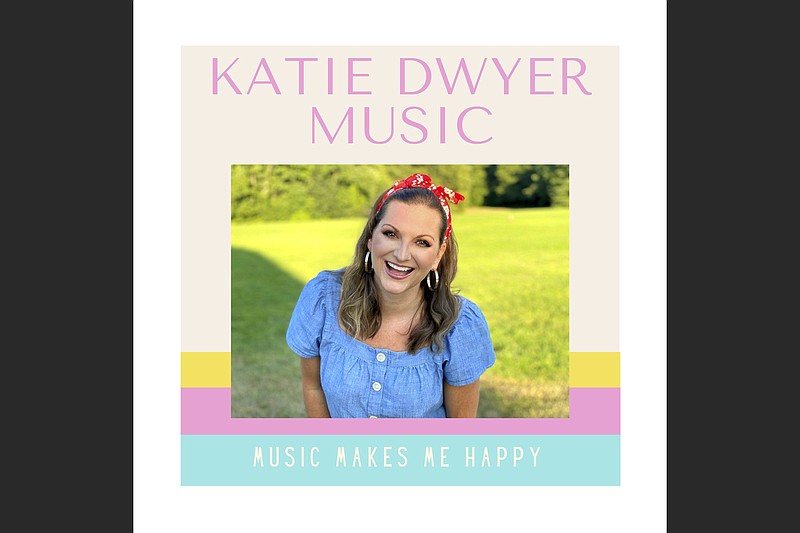 Arkadelphia native Katie Dwyer, who now lives in New York with her husband and 3-year-old daughter, recently released her debut children’s album, “Music Makes Me Happy,” and also uses her music to teach children in her online Katie’s Corner classes. (Special to the Democrat-Gazette)

On "Music Makes Me Happy," the debut children's album from Katie Dwyer, we meet "Pete the Potato" and "Rosie the Hippo," get to "Dance Like a Snowflake," go on a "Jungle Safari" and sing a "Silly Word Song."

The 17-song collection of infectious singalongs, recorded at Haxton Road Studios in Bentonville and released in September, was inspired by Dwyer's passion for working with children.

"I've worked with kids pretty much my entire adult life," says Dwyer, a native of Arkadelphia and an Ouachita Baptist University graduate who moved to New York in 2005 where she lives with husband Kevin, a former professional ballet dancer, and daughter Hazel Rose.

In New York she spent years working as a nanny and volunteered in the inpatient pediatric ward at Memorial Sloan-Kettering Hospital.

Along with her zest for teaching and caring for children, Dwyer, 38, is also a performing arts veteran. She began playing piano when she was 7 and has been singing and dancing for most of her life.

When Hazel Rose was born in 2017, Dwyer, the daughter of former Arkadelphia Mayor Michael Kolb, would play music for her.

"I would sit down and do a 30-minute music session with her every day."

Soon Dwyer was writing her own music, and her first songs were inspired by Hazel's toys.

With the songs piling up, Dwyer began to think of what she could do with them and decided she wanted to use her music as part of an educational program.

The Dwyers had enrolled Hazel into a music program, but the cost was prohibitive.

"How do parents who don't have the funds help their children experience these activities — arts, dance, piano, music?" asks the energetic Dwyer, who describes herself as a "human cartoon in person."

She put together classes called Katie's Corner, which are available on Zoom, and was keen to use something besides "Twinkle, Twinkle, Lucky Star," "Wheels on the Bus" or other chestnuts from the children's music canon.

"I really wanted to use my creative talents to set my music program apart. Everything we do in class is original."

At first, the songs on "Music Makes Me Happy" were going to be instrumentals she could give to students, but Dwyer decided to add lyrics and make a real album. So she called Neil Greenhaw, owner of Haxton Road and a former classmate at OBU.

"He is unbelievably talented," Dwyer says. "I knew the quality would be top-notch. His studio is beautiful."

Suzanne Yerton is a pharmacist in Fort Smith whose two children, ages 18 months and 3, have taken Katie's Corner classes.

"Especially during the heavier covid times, when we were trapped inside all the time, we really enjoyed logging into the Katie's Corner sessions," Yerton says. "It was such a great way for my kids to get engaged and it was also great to log in and see kids from all over the country."

A typical session finds Dwyer interacting with parents and guardians as they log in and then leading children through her music.

"The kids quickly get familiar with her songs. They love her classes," Yerton says. "They love to get up and dance. She has several songs that encourage moving and dancing."

Yerton adds in an email: "... her music has lyrics that go deeper than typical children's music. Her music has themes of unconditional love ('I Like You'), travel ('San Fransisco'), adventure ('Jungle Safari,' 'Rosie the Hippo'), empowerment ('Who Can,' 'Tiny Tugboat'), and entrepreneurship ('Berry Delight')."

Her 3-year-old son's favorite song is "Giant Moe," Yerton says, a madcap romp on "Music Makes Me Happy" about trying not to wake up the sleeping titular character.

While the album is certainly geared toward the young 'uns, Dwyer says she kept the parents in mind as well.

"I have heard my fair share of kid's music. I said I am going to write an album that is great for kids but that parents love listening to because it has rhythm, an electric guitar, or it has a jazzy feel or a Billy Joel feel."

To that end, amid the funny, kid-pleasers, there are tracks that, instrumentally at least, could almost pass for grown-up jams like the sweet, poppy ballad "I Like You" and "San Francisco," which has a driving, pulsating melody.

"My ultimate goal is to write music that the whole family can sing and enjoy together," Dwyer says.