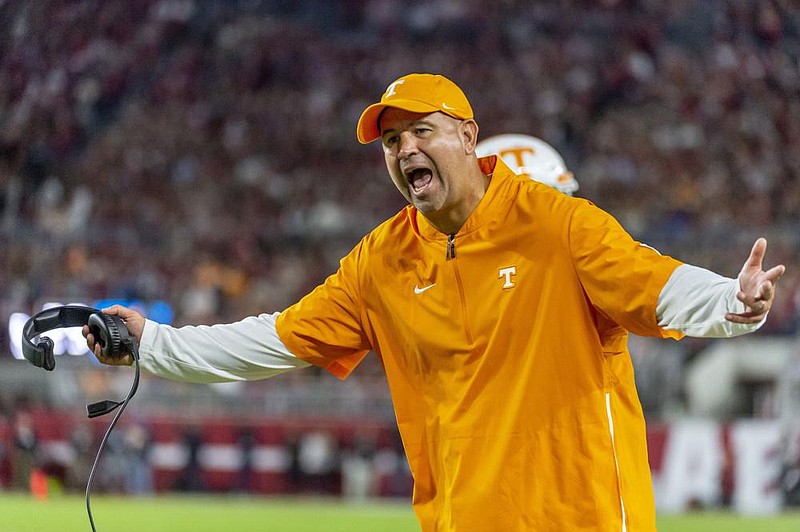 Tennessee Coach Jeremy Pruitt and the Volunteers have lost three consecutive games entering Saturday’s matchup at Arkansas after opening the season 2-0. “We’re really probably frustrated, would be the right word, that we’re not playing the way we expect to play,” Pruitt said. “And I think part of fixing it is recognizing it.” (AP file photo)

FAYETTEVILLE -- Tennessee is looking for another midseason turnaround after a lopsided loss to Alabama.

"We've been down and out before," Tennessee linebacker Henry To'o To'o said. "We've been counted out before. We know what it takes to get back."

The Vols hope to start turning their season around when they play the University of Arkansas (2-3) on Saturday at Reynolds Razorback Stadium.

Tennessee had extra time to regroup after the Alabama game with an open date last week.

"We really just wanted to go back to the basics and start over with just getting all the execution down," said running back Eric Gray, who leads the Vols with 79 carries for 355 yards. "Make sure we're executing at a high level, make sure everyone knows what they're doing from the O-line to the quarterbacks, running backs, receivers, tight ends.

"Everyone knows what they're doing in basic run game, basic pass game, different things like that."

Jeremy Pruitt, 15-15 in his third season as Tennessee's coach, said the Vols are staying positive.

"I can tell you we're not discouraged," Pruitt said after the Alabama game. "There's nothing that's discouraging in our locker room.

"We're really probably frustrated, would be the right word, that we're not playing the way we expect to play. And I think part of fixing it is recognizing it. I saw a lot of improvement from a lot of players. But it's going to take all of us to play at a high level to beat those guys."

Tennessee extended its winning streak to eight games by opening with victories at South Carolina 31-27 and over Missouri 35-12. None of the opponents during the winning streak were nationally ranked.

Kentucky pulled an upset by winning at Tennessee for the first time since 1984 while twice returning Jarrett Guarantano interceptions for touchdowns in beating the Vols 34-7.

"Hey, nobody is more disappointed than the people within our program, I can assure you," Pruitt said when asked after the Alabama game what his message would be to Tennessee fans. "It is the reason that I wanted this job. I understood the passion, the energy, the expectations of Tennessee football."

Pruitt faced the Vols as the defensive coordinator at Georgia and Alabama.

"When I took the job, I knew exactly where it was at -- exactly," he said. "Which is why I wanted the job. I wanted this job because I wanted to get it to where it is supposed to be.

The Vols had a players' meeting last week.

"The tone of that message was just, 'Hey, look everybody, this is our team. We got to go out there and we got to play hard,' " Gray said. "Everyone wants to get on the same page and go out there and just have fun. It's fun when you win. It's going to take hard work, but we know the recipe to do it."

"We needed this week off and we needed it as a whole," he said. "Not only the defensive side, but the offensive side.

Pruitt was part of national championship teams as defensive coordinator at Florida State in 2013 and Alabama in 2017. During a five-year stretch from 2013-17, his teams were a combined 61-8.

"I'm not used to this, for sure," Pruitt said. "I know the players in our locker room, this isn't what they came here for, either. These guys are hungry, they want to improve. And they will because of that.

"So we've got a young football team that is going to work hard. We've got the last half of the season to show that."

To'o To'o said the Vols can take what they learned last season and apply it now.

"We know what it takes to be [back] from our lowest point," he said. "Coach Pruitt harps on us all the time, 'We're going to find a way.'

"No matter what it is, no matter how we're looking, how we're doing, we're going to find a way to come out with the results that we want."