He was her first — and now her last — boyfriend 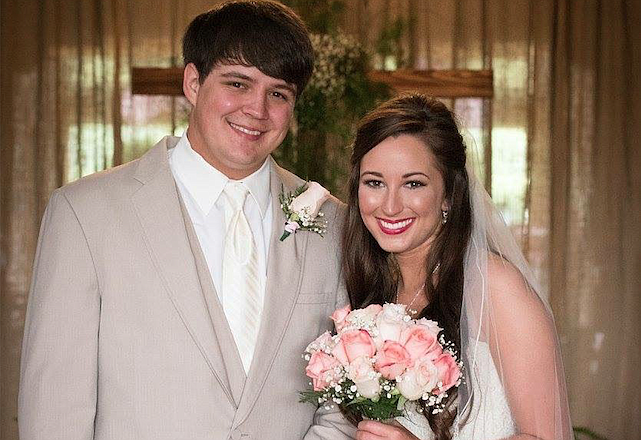 Cindy Cameron and Ryan Gammel were married on June 13, 2015. (Special to the Democrat-Gazette)

Cindy Cameron had been sad when she found out she wouldn't have recess with the cute little spiky-haired boy who popped into her preschool class to say hi to his mom, her teacher.

"We went to the same preschool, but we weren't in the same class," Cindy says about Ryan Gammel. "He would come into the classroom sometimes for different things and I would see him in the hallway. I just thought he was the cutest thing. I'm pretty sure he didn't notice me at all back then."

He didn't, he admits.

They had several friends in common over the years and Ryan knew Cindy's dad, who had an excavation business, and saw him around town often. His first recollection of Cindy, though, is from her 16th birthday in 2009.

He sent her a Facebook message then wishing her a happy birthday.

"I don't really talk to people that I don't know," Cindy says. "His name popped up, and he told me happy birthday. And I just said, 'Thank you.'"

Ryan told her he didn't know if she would remember him but that his mother had been her teacher.

They had both attended preschool in White Hall but Ryan had moved to Sheridan for kindergarten.

A mutual family friend had suggested he look Cindy up.

His mom chimed in that she remembered Cindy from preschool, which prompted him to look Cindy up on Facebook, where he saw that it was her birthday and sent her the message.

"I'm not going to say I'm shy," says Ryan, before adding this was a bit out of character for him.

He didn't expect anything to come of it. But they started chatting, and he realized he wanted to talk with her again.

"At the end of the conversation, he told me that he lost his phone and asked if I could message him so he could hear his phone go off so that he could find it," Cindy says. "I had no idea that that was a way for him to get my number. I texted him, just trying to be helpful, and we never really stopped talking after that."

In June 2009, a couple of weeks after that first interaction, they went to dinner and a movie with two of Cindy's friends and their boyfriends.

"I think that I spent half the day trying to figure out what to wear because Ryan was my first date, my first boyfriend, my first everything, because I had never even been on a date before," Cindy says.

Cindy and Ryan dated throughout high school. After graduation they went to the University of Arkansas at Monticello.

"He didn't want to get married until after we graduated because he didn't want to jeopardize either of our scholarships, especially since I had a full ride for my bachelor of science in nursing," Cindy says.

Ryan says he wanted to wait for them to settle down when both could have jobs and support themselves. Still, he knew he wanted to marry her and had bought a ring two months before he proposed on Sept. 10, 2011, as they sat together on the couch at his parents' house, watching the Razorbacks game on television.

"I had intended on actually going somewhere or something really nice," he says.

His mother, however, knew he had the ring and encouraged him to just propose already.

Cindy had gone with Ryan earlier that day to get some things done at his deer camp.

"We were sweaty and dirty, and I had gone home and taken a shower and put on shorts and a T-shirt before I went over to his house," she says. "I remember he had pretended like he dropped his phone when we were sitting on the couch and then he said, 'Can you hand me the phone?' I was like, 'It's right in front of you. Why do I have to get up and get it?'"

She picked up the phone and when she turned around, Ryan was kneeling with the ring in his hand.

"He asked me to marry him so fast that I had to have him repeat himself because he couldn't put two and two together what he was saying," she says.

Cindy and Ryan live in White Hall with their silver Labrador, Trigger. Cindy is a nurse case manager with Blue Cross Blue Shield. Ryan is a sales representative for South Arkansas Business Solution.

"Ryan was my first boyfriend, and I was thankful that I didn't have to go through much to find him," she says. "I feel really blessed."

She says: “We were 3 or 4 years old. I thought he was really handsome and he looked like he was sweet.”

He says: “It would have been a little later when I remember first seeing her, but I definitely knew she was out of my league.”

She says: “I knew I was making the right choice. There was nobody else in the whole world I that I would rather be with and I just felt really blessed.”

He says: “I was still trying to figure out how in the world I got her to fall for me.”

She says: “You have to put God first or nothing else is going to work or make sense. And make sure that you make time for each other and that you’re able to trust each other and communicate.”

He says: “Never go to sleep mad. It’s better if you even have to stay up all night talking about it and working through it. That’s something I’ve tried to live by and it’s worked for us.”