Playoffs set after 28 teams opt out 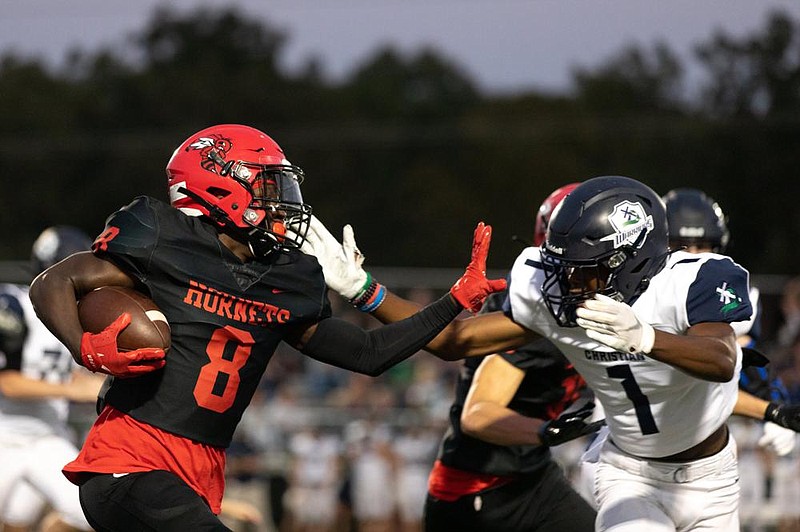 Maumelle wide receiver Dashaire Ford-Burton (left) and the Hornets will play Nettleton in a Class 5A play-in round game Friday night at Bobby Tiner Stadium in Maumelle. The winner will play at Wynne in the rst round Nov. 20. The playoff bracket was released by the Arkansas Activities Association on Saturday afternoon. (Arkansas Democrat-Gazette/Justin Cunningham)

With the coronavirus pandemic affecting the schedule this season, all teams were eligible to opt into the postseason if they wanted to do so.

Twenty-eight teams opted out of the playoffs, including Little Rock Southwest in Class 7A, and De Queen, Forrest City, Little Rock Hall and Paragould in Class 5A. Class 4A had seven teams opt out (Berryville, Southside Batesville, Highland, Cave City, Dover, Benton Harmony Grove and Helena-West Helena), while Class 3A had 11 (Lavaca, Mansfield, Riverview, Palestine-Wheatley, Manila, Danville, Two Rivers, Genoa Central, Fouke, Horatio and Barton). Class 2A had five opt outs (Conway Christian, Cutter Morning Star, Marvell, Lafayette County, Strong). None of the 16 teams in Class 6A opted out before Saturday's 8 a.m. deadline by the AAA.

Since Little Rock Southwest opted out of the Class 7A playoffs, Bentonville -- the 7A-West Conference champion -- will have the only first-round bye in Class 7A.

Steve Roberts, an associate executive director at the AAA who was in charge of putting together the football playoff bracket, said the process worked out well despite having multiple teams miss games because of covid-19.

"It did serve its purpose," Roberts said of having a play-in round built into the bracket. "The purpose for the play-in games was to allow teams that had an opportunity to play, but couldn't play due to circumstances beyond their control. They will still have an opportunity to move into the bracket. We didn't want to eliminate anyone all together."

Criteria used for the playoff bracket this season included number of conference wins, head-to-head meetings and tiebreaker points. Roberts said he didn't hear of any complaints from any schools in the state about how the bracket was set up.

For Class 5A, there are 11 play-in games, including Nettleton at Maumelle.

The Hornets finished fourth in the 5A-Central and would have gone on the road in a normal year in the first round of the playoffs. Instead, they'll get to play their first home playoff game since the 2014 season.

"We're happy to get a home game," Horton said. "I feel like our conference [the 5A-Central] has gotten us ready."

The Nettleton-Maumelle winner will travel to 5A-East Conference champion Wynne on Nov. 20. Wynne is one of four teams in Class 5A with a bye, along with other conference champions Pulaski Academy (5A-Central), Harrison (5A-East) and Hot Springs Lakeside (5A-South).

Mills Coach Cortez Lee has the Comets in the playoffs for the first time since 2013. They will host Gravette in a Class 4A play-in round game Friday night.

Mills went 4-6 overall and 3-4 in the 4A-2 Conference. The Comets have won two consecutive games, including a 34-24 victory over Heber Springs on Friday night.

Lee praised the AAA for having the ability to change its playoff structure in a pandemic.

"They were able to monitor and adjust," Lee said. "It allows everyone to play if they want to."

Roberts admitted he wasn't sure whether there would have been a 2020 high school football season back in August. But entering the second week of November -- and first week of the playoffs -- the former head coach at Arkansas State University and athletic director at Cabot is pleased to have teams still playing football.

"Even with all of the challenges this year has presented, if you would have told me in August we would have had the playoffs, I would have taken that in a heartbeat," Roberts said.