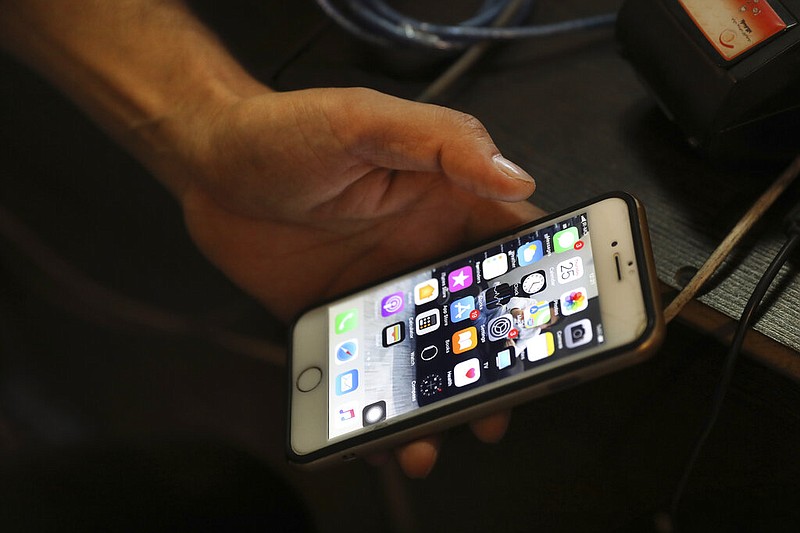 A man looks at the apps on his cellphone in an internet cafe in this July 2019 file photo.

Marshall Police Chief Lang Holland resigned Saturday afternoon, a day after urging violence against "traitors" who had attempted to prevent the reelection of President Donald Trump.

Kevin Elliott, the city's mayor, said Holland apologized for the trouble caused by a series of profanity-laden social media posts, which also called for the death of "all Marxist Democrats."

Online, Holland echoed claims that the president had been the victim of an Election Day attempted coup, with his enemies using electoral fraud to deny Trump a second term.

In one post, Holland declared: "Do not forget what these Marxist Democrat b* have tried to do. When you see one in public get in their face do not give them peace. Throw water on them at restaurants. Push them off sidewalks. Never let them forget they are traitors and have no right to live in this Republic after what they have done."

Another stated: "Death to all Marxist Democrats. Take no prisoners leave no survivors!!"

Others expressed disgust with the state of the nation.

One, noting passage of Polish anti-abortion legislation, said: "Maybe I should look to moving to Poland and trying to get citizenship. The Poles are a lot smarter than the Marxist Bolshevik Democrats who infest America."

[DOCUMENT: Read the announcement by the mayor of Marshall » arkansasonline.com/118marshall/]

"I pray all those in that picture hang on the gallows and are drawn and quartered!!!!" he wrote. "Anything less is not acceptable."

Holland made the comments on Parler, a conservative alternative to Twitter that encourages its users to "speak freely and express yourself openly, without fear of being 'deplatformed' for your views."

On Saturday evening, the posts appeared to no longer be available online.

The Police Department's Facebook page also appeared to have been disabled.

Holland had been police chief in Marshall, a city of 1,355 people and the Searcy County seat, for the past two years, Elliott said.

His resignation was effective immediately.

His job performance had been exemplary, Elliott said.

"He's done excellent. I've been with the city of Marshall for 26 years and, by far, he's been the best police chief that I've ever seen," Elliott said.

The incendiary posts came as a complete surprise, Elliott said.

"I don't [do] social media, but I was notified last night and all day today and got a bunch of posts and pictures to me," he said.

Asked about the comments Saturday, Arkansas Gov. Asa Hutchinson said they were "dangerous" and that Holland's departure would be merited.

The posts were inconsistent with the city's mission, Elliott said.

"I don't care who they are -- Republican, Democrat or whoever -- my Police Department for the city of Marshall is here to protect and serve everybody," he said.

After reviewing the material, "I called in the Arkansas Municipal League [and] my attorneys, [and] I got some advice on the steps I need to take and the proper direction I need to go. I called Mr. Holland in, and he resigned as police chief," Elliott said.

No resignation had been requested, the mayor said.

Holland has a long record of service in the area.

He served as a deputy with the Searcy County sheriff's office between January 2001 and August 2015, according to his LinkedIn page, taking a break at some point to work as a police adviser or mentor in Iraq and Afghanistan.

In 2014, he was shot while responding to a hostage situation in Leslie, southeast of Marshall. Holland's conduct that day resulted in a medal of valor from the Arkansas Sheriffs Association, according to his LinkedIn page. The Arkansas State Police also recognized his "gallant efforts."

In addition to being a vocal Trump supporter, Holland was also skeptical of governmental efforts to curb the spread of covid-19.

In July, when Hutchinson ordered Arkansans to wear masks in public places, Holland accused him of exceeding his authority.

"I Chief Lang Holland feel this order is a very large overreach of the powers given to the State government by the citizens of the state of Arkansas," he wrote in a memo posted on the Police Department Facebook page. "Therefore the Marshall Police Department will take NO enforcement action of any kind this includes arrest or citation by anyone who is not wearing a mask while out in public."

Holland subsequently told the Arkansas Democrat-Gazette that he doesn't wear a mask himself and would not require his officers to wear them while on duty.

Information for this article was contributed by John Moritz and John Lynch of the Arkansas Democrat-Gazette.