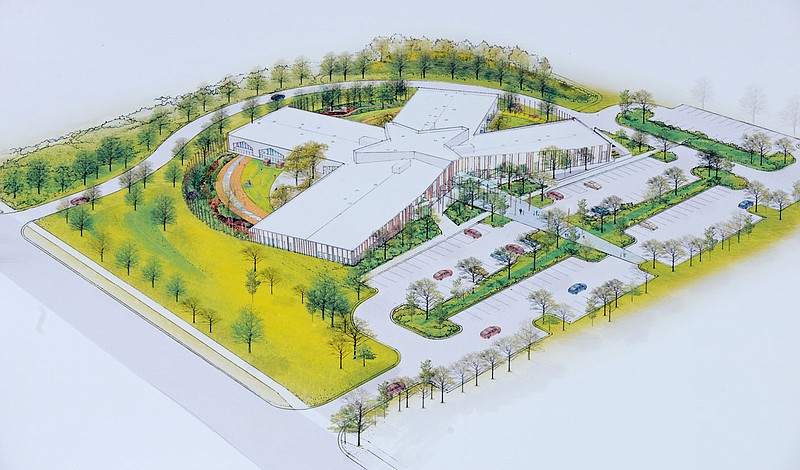 NWA Democrat-Gazette/BEN GOFF &#8226; @NWABENGOFF A rendering of the new Helen R. Walton Children&#8217;s Enrichment Center sits on display Saturday during the center&#8217;s Bike 2 the Future event at the future site of the new facility on N.E. J Street in Bentonville. Families decorated their bikes at Lawrence Plaza and rode to the site, where plans for the facility were unveiled along with games and activities.

SPRINGDALE -- Three projects intended to give residents more amenities in Northwest Arkansas have received a boost from the Walton Family Foundation.

The foundation will give nearly $1.5 million to help pay for the design of projects in Bentonville, Rogers and Springdale. The foundation's design excellence program has previously contributed to projects such as the Rogers Historical Museum, which received $480,000 for design, and TheatreSquared in Fayetteville, which received more than $4 million.

A $656,650 grant will go toward redesigning The Jones Center's 52-acre campus. The center is a recreation and event center off Emma Avenue in downtown Springdale.

"The redesign of the outdoor spaces will transform The Jones Center grounds into a regional destination and create stronger physical connections to downtown Springdale and Luther George Park.

Plans include park-like green spaces, inviting bike paths, infrastructure improvements and enhanced recreational amenities to serve diverse populations in an accessible and welcoming environment," according to a news release from the center.

The Jones Center has hired Denver-based Civitas Inc. for design work and is looking to have designs finished by mid-2021, said Joan McQuaid, marketing manager at The Jones Center.

"Looking forward, we are very excited to revitalize and enrich the outdoor experience for people of all ages and all communities who visit our campus. We will be able to create new sustainable features for recreation, performance, public art and pathways for people to enjoy downtown Springdale," Ed Clifford, chief executive officer and president of the Jones Trust and Jones Center, said in the news release.

Bentonville will complete the design for The Commons, a plaza in the Quilt of Parks, with the help of a $501,150 grant.

The Quilt of Parks plan involves connecting and creating several public spaces, including the downtown square "so downtown Bentonville feels like the living room of our community," said David Wright, parks and recreation director.

The Commons will be a space at the southwest corner of Southeast Second and Southeast A streets with outdoor dining, a stage and and lawn space for events such as farmers markets or First Friday events.

Wright expects the designs will be finished in eight months to a year.

More than $336,000 will go toward designing a downtown alleyway project in Rogers.

The Walton Family Foundation assessed its design excellent program for the past five years and identified strengths as building regional capacity by contributing to the revitalization of local economies, strengthening public life, celebrating local culture and elevating standards of sustainability and resilience.

The foundation listed a mismatch between user needs and decisions for design and programming; a lack of representation of non-white, lower income and less educated users; and connectivity challenges such as inadequate infrastructure as challenges for the program in the future.