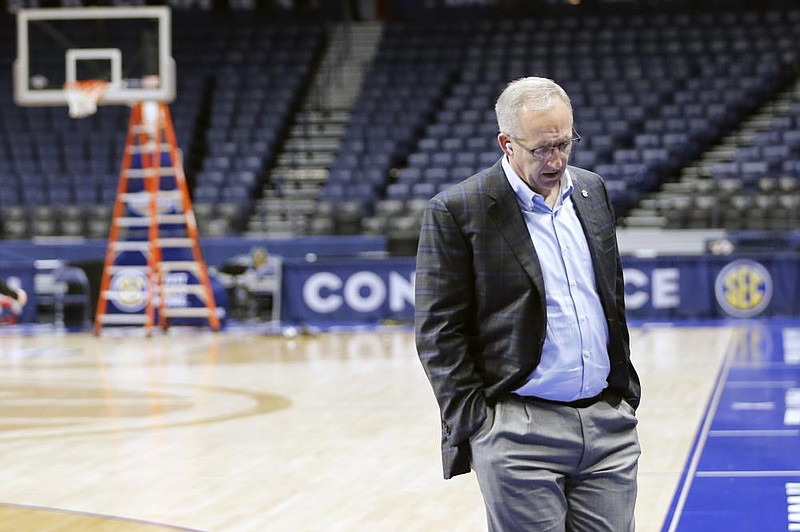 Commissioner Greg Sankey and the SEC have seen 4 of 7 football games scheduled for this weekend postponed by covid-19 issues. Before this week, 40 of 44 conference games were played as scheduled. (AP le photo)

6(6);Arkansas;3-3;Homecoming game for Franks at the Swamp

Franks, who has provided stability at quarterback for the Razorbacks after there were eight starters at the position the previous two seasons, will go against his former team when Arkansas plays at Florida on Saturday night.

Franks started 24 games for the Gators the previous three seasons -- including all 13 in 2018, and the first three last year before he suffered a season-ending ankle injury.

With Kyle Trask excelling as Franks' replacement last season, Franks transferred to Arkansas, where he's been a key in the Razorbacks being the SEC's most pleasantly surprising team. He's completed 123 of 183 passes (67.2%) for 1,428 yards and 14 touchdowns with 3 interceptions.

With four games being postponed, the Gators are the only nationally ranked SEC team playing, and the Razorbacks offer an intriguing matchup.

Arkansas is a 17 1/2-point underdog, but the Razorbacks literally have beaten the odds all season. They haven't been favored in any of their first six games, but have covered the spread every time.

Interesting subplots for the game include Arkansas quarterback Feleipe Franks returning to Florida, where he was a starter for the Gators before transferring to the UA, and Razorbacks defensive coordinator Barry Odom serving as interim coach with Sam Pittman unable to make the trip after testing positive for covid-19.

Odom was Missouri's coach the previous four seasons and went 2-2 in games against Florida.

555.2 – Average yards per game in total offense for Alabama.

61-7 – Margin Tennessee has been outscored by its opponents in the third quarter, including 24-0 by Arkansas.

58 – Players who dressed out for Vanderbilt at Mississippi State last week.

"I'm not going to say the sky's falling or everything's coming down. We've got to be better."

"I'm going to give Ed Reed a game ball. I don't know where he is, but I'll figure that out."

– Mississippi State Coach Mike Leach on the Bulldogs' 24-17 victory over Vanderbilt after he showed his players film highlights of Reed, a Pro Football Hall of Fame safety, for inspiration.

"Our offensive and defensive lines came to play."

"We look forward to the rescheduling of the game against Alabama. We want to play Alabama. It's a great rivalry for us. They're a great football team, and we want to accept that challenge."

– LSU Coach Ed Orgeron on the Tigers' game against the Crimson Tide being postponed.

On Wednesday, the SEC office announced the Georgia-Missouri game was the fourth conference matchup postponed this week because the Tigers don't have enough players available due to covid-19.

Monday it was announced the Auburn-Mississippi State would be postponed because both teams are struggling with virus outbreaks.

Tuesday came word the Alabama-LSU and Tennessee-Texas A&M games were postponed as well because the Tigers and Aggies have covid-19 issues.

"This is certainly a week unlike any other," SEC Commissioner Greg Sankey said. "I've repeatedly said, really since last March, that the circumstances around the virus will guide our decisions.

"The reality is it is the virus that in some circumstances determines our direction."

SEC coaches said they're disappointed about the postponements, but they didn't sound surprised.

Missouri is dealing with a postponed game for the second time this season.

"Honestly, I think it's about the 100th time we've had to adjust scheduling from the third spring practice, where you find out that you're sending all of your kids home to not having spring, not having summer, and going from 12 games to 10 and an all-SEC season," Missouri Coach Eli Drinkwitz said. "So I think that's the name of the 2020 season, is just flexibility and adjustment."

LSU also had a game postponed for the second time.

Several teams already have games rescheduled for Dec. 12 -- an open date put into the schedule in case of postponements -- the week before the SEC Championship Game.

Possible solutions for teams needing to reschedule more than one game could involve other games being moved to different dates.

"Your ability to seek from me when someone will play, that's not available right now," Sankey told reporters on a conference call. "That's the adjustment that's ahead. We'll likely test people's patience.

"We'll work with our membership, our athletics directors, our presidents and chancellors to continue to guide us forward. We'll continue to move forward with our efforts to support healthy competition, leading us to a conference championship in football.

"That's been our goal while acknowledging the potential for adjustments that may be needed."

Alabama had a game postponed for the first time.

"We kind of expect disruptions during the season, so how we handle them is probably the most important thing right now," Crimson Tide Coach Nick Saban said. "What we'd like to do is try to keep our team in some kind of rhythm relative to how we practice and how we try to continue to improve to finish the season."

Assuming the three games still scheduled for this week are played, including this week's postponements, the SEC will have played 84.3% of its games as scheduled.

"I certainly think that if somebody had told us in June or July, there probably would have been a little shock to it that the efficiency rate [of playing games] would be so high," Smart said. "You don't know where it's headed, but I know the seniors across the SEC would say it's been a benefit for them to play, and it's been a benefit for the younger players in terms of growth and development."

Drinkwitz praised the leadership of Sankey, who took a deliberate approach to giving SEC teams the best chance to compete in all sports this fall.

"Without a shadow of a doubt there's not been a better leader in a conference than Greg Sankey in the SEC," Drinkwitz said. "Being steadfast in making decisions with the best information possible.

"I think every time I've shaken the [opposing] coaches' hands before a game, we've talked about how fortunate it is we get to play, and how excited we are to get to play."

SEC coaches who had games postponed this week said it wasn't because a lot of players tested positive for covid-19, but that subsequent contract tracing resulted in a large group of players being unavailable for practice and games.

Alabama Coach Nick Saban said safety of the players is of the utmost importance, and that includes following contact tracing guidelines.

"You're quarantining people that you don't even know if they're sick or not. That's the part that's a little more difficult to manage."

Since the 2000 season, there have been 14 FBS teams that won games while having minus rushing yards. according to Sportsreference.com.

Mike Leach has coached two of those teams.

Mississippi State, where Leach is in his first season as coach, had minus-22 rushing yards against Vanderbilt on Saturday, but the Bulldogs won 24-17.

Leach was Washington State's coach in 2016 when the Cougars beat Arizona State 17-7 while having minus-38 rushing yards.

As poorly as Mississippi State ran the ball against Vanderbilt, the Bulldogs had two rushing touchdowns.

The Commodores sacked Mississippi State quarterback Will Rogers three times for 31 yards. On the game's final play after Vanderbilt had turned the ball over on downs at its 49, Rogers took a knee for a 5-yard loss credited to Mississippi State as a team rush and accounting. So those minus-36 yards combined with the plus-14 rushing yards added up to minus-22.

Two of the other 12 games in which a team won while having minus rushing yards involved the University of Arkansas and Arkansas State University.

Wisconsin had minus-5 rushing yards in a 17-14 victory over the Razorbacks in the Capital One Bowl on Jan. 1, 2007. The Razorbacks sacked Badgers quarterback John Stacco nine times for 41 yards in losses, but he passed for 206 yards and 2 touchdowns.

Alabama had an open date last week, but the Crimson Tide moved from No. 2 to No. 1 in this week's Associated Press poll thanks to Notre Dame's 47-40 upset of top-ranked Clemson in two overtimes last week in South Bend, Ind.

Alabama's game at LSU scheduled for Saturday has been postponed because of covid-19 issues for the Tigers, so the Tide figure to stay No. 1 again next week.

"It means nothing at all right now," Alabama Coach Nick Saban said. "And I think especially in this year, because it's very, very difficult even at this point in the season to know who is really established themselves as the most dangerous teams in the country on a consistent basis."

Jeremy Pruitt, who fell to 15-16 in his third season as Tennessee's coach, was asked on the SEC coaches teleconference how he would evaluate his job performance with the Vols at 2-4 and having lost four consecutive games.

Give Pruitt credit for not getting defensive.

"Well, it's all based off your record, right?" Pruitt said. "So based off our record, it's not where it needs to be. That's pretty obvious."

For 14 consecutive seasons the team with the most rushing yards won the Florida-Georgia game, with the Gators and Bulldogs 7-7 against each other in those matchups.

When Georgia's Zamir White ran 75 yards for a touchdown on the first snap of Saturday's game and the Bulldogs jumped out to a 14-0 lead, it looked like the rushing trend would continue.

But Florida put a stop to the streak of rushing winners with an explosive passing attack to beat Georgia 44-28.

The Bulldogs had 165 rushing yards to 99 for the Gators, but Florida quarterback Kyle Trask passed for 474 yards and 4 touchdowns while Georgia quarterbacks Stetson Bennett and D'Wan Mathis combined for 112 passing yards without a touchdown.

"Zack threw a touchdown pass [Tuesday]," Orgeron said. "The whole team was cheering. Seriously, it was good. We had one of our best practices."

Orgeron said junior Myles Brennan, who started the first three games at quarterback for LSU, might be out for the season because of abdominal and hip injuries he suffered in a 45-41 loss at Missouri.