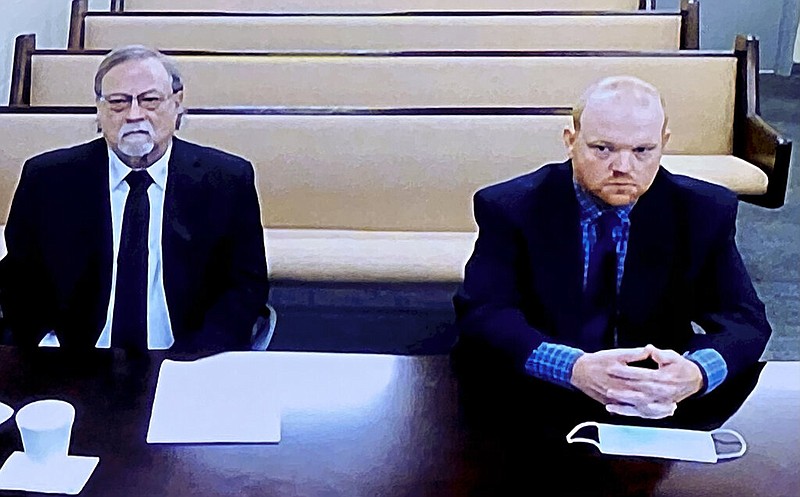 In this image made from video, Gregory (left) and Travis McMichael, the father and son accused in the February 2020 shooting death of Ahmaud Arbery in Georgia, listen via closed-circuit television in the Glynn County (Ga.) detention center on Thursday, Nov. 12, 2020. Lawyers were arguing for bond to be set.

SAVANNAH, Ga. — A Georgia judge denied bond Friday for the father and son charged with murder in the slaying of Ahmaud Arbery, saying he’s concerned the two men took the law into their own hands and endangered neighbors in the shooting of a Black man on a residential street.

Travis McMichael and his father, Gregory McMichael, have been jailed since their arrests in May, more than two months after Arbery was slain. The McMichaels armed themselves and chased 25-year-old Arbery in a truck after they spotted him running in their neighborhood.

During two days of courtroom testimony and legal arguments, Superior Court Judge Timothy Walmsley heard conflicting accounts of the Feb. 23 shooting just outside the port city of Brunswick, about 70 miles south of Savannah.

Defense attorneys for the McMichaels argued that they were legally justified to pursue Arbery because they suspected he was a burglar. They also contended Travis McMichael was defending himself when he shot Arbery three times with a shotgun.

Cellphone video of the shooting shows Arbery trying to run around the McMichaels’ pickup. Arbery comes face-to-face with Travis McMichael in front of the truck. The video shows Arbery punching him and grappling for the gun in between gunshots. Arbery finally staggers and falls after the third gunshot hits him at point-blank range.

Prosecutors say Arbery was no criminal but merely out jogging, and that the McMichaels acted as “vigilantes” motived by racist views. They showed the judge photos of a home near the shooting scene that was damaged by gunfire.

“You can interpret the video in a number of different ways,” Walmsley said Friday from the courthouse in Brunswick as the hearing was streamed live online. “But the video tells me there’s a significant risk and danger to the community.”

The judge also agreed with prosecutors that Gregory McMichael not only appeared “willing to place the law in his own hands” by chasing Arbery without first calling 911, but also seemed to try to influence investigators who arrived after the shooting.

Police body camera video played in court showed Gregory McMichael, 64, telling police he’s a former law enforcement officer and “I know what you guys do.” He also tells them Arbery is suspected of break-ins during “frequent trips to the neighborhood.”

“Possibly it’s one of the reasons this case took so long to get where it is right now,” Walmsley said, apparently referring to the two-month delay between the shooting and the McMichaels’ arrests.

Questions about whether racism played a role in the killing sharpened during a June hearing when an investigator testified that a third defendant, a neighbor who joined the pursuit and took the cellphone video, told authorities he heard Travis McMichael, 34, utter a racial slur after shooting Arbery.

In court Thursday, prosecutor Jesse Evans read a message Travis McMichael posted on Facebook that used an offensive term for Asians, as well as a text message he sent last year to a friend that used a slur for Black people when referring to a “crackhead … with gold teeth.”

Defense attorneys for both McMichaels denied any racist motives in the shooting. Laura Hogue, one of Gregory McMichael’s lawyers, accused prosecutors of playing up race to distract from evidence that the shooting was justified.

“You would think that the race of Ahmaud Arbery is the only thing that makes the state of Georgia concerned about a serious event on Feb 23,” Hogue said. She questioned whether the slaying would have gotten much attention “if this was Arnold Arbery, a white man.”

Robert Rubin, one of Travis McMichael’s attorneys, argued that the McMichaels and other neighbors were on edge in February. He noted a Black man, believed to be Arbery, had been caught on security video in recent months inside a nearby house under construction. And Travis McMichael reported to police that someone stole a gun from his truck in January.

Travis McMichael never confronted people “unless he himself was put in danger,” Rubin said. “And that was one time, by one man named Ahmaud Arbery.”

An attorney for the owner of the home under construction has said nothing was stolen. Georgia Bureau of Investigation agent Richard Dial testified in June that he had seen no evidence Arbery committed crimes in the McMichaels’ neighborhood.

The McMichaels weren’t arrested until the cellphone video of the shooting leaked online and the Georgia Bureau of Investigation took over the case. A grand jury indicted both McMichaels and a neighbor, William “Roddie” Bryan, on charges including malice murder, felony murder, aggravated assault and false imprisonment. Bryan was previously denied bond.