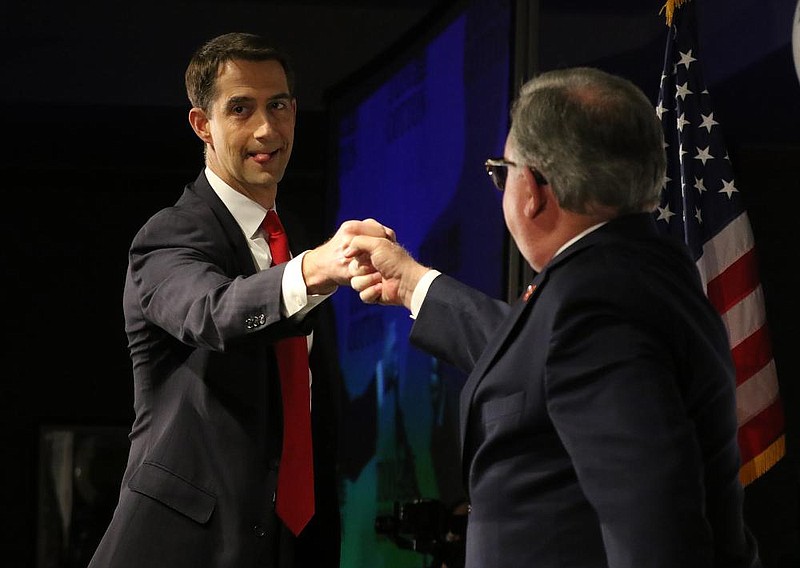 WASHINGTON -- Now that his own race is over, U.S. Sen. Tom Cotton is running digital ads in Georgia, hoping to influence that state's Jan. 5 runoff election.

The Little Rock Republican is targeting Raphael Warnock, the Atlanta Democrat who finished first in this month's special election with 32.9% of the vote. U.S. Sen. Kelly Loeffler, a Republican who was appointed to fill the seat temporarily, finished second with 25.9%, ahead of Republican U.S. Rep. Doug Collins, who finished third with 19.9%.

With none of the candidates capturing a majority of the vote, the top two finishers will face off.

The 30-spot ad alleges that Warnock "hates" the police and is chummy with the Rev. Jeremiah Wright, Barack Obama's former pastor.

Warnock, pastor of historic Ebenezer Baptist Church in Atlanta, has appeared at Wright's Trinity United Church of Christ in Chicago.

The ad includes images of the World Trade Center after it was struck by terrorists, and includes a clip of Wright saying: "Not God bless America; God d* America."

The ad concludes with a photo of Cotton in military garb as well as a perfunctory voiceover: "I'm Tom Cotton and I approved this message."

A news release highlighting the spot did not state the size of the ad buy.

Calls for violence against Democrats by a now former police chief in Searcy County are "reprehensible," leaders of the Arkansas Association of Chiefs of Police said last week.

In a written statement, James W. Kuchenbecker, the group's president, and Gary Sipes, the organization's executive director, condemned remarks that were made shortly after the presidential election by Lang Holland.

Holland stepped down as Marshall police chief shortly after social media posts that portrayed President Donald Trump as the victim of an Election Day attempted coup carried about by "traitors" in the Democratic Party.

"Death to all Marxist Democrats. Take no prisoners leave no survivors!!" he wrote in one of his posts on the Parler site that have since been removed from public view.

The comments drew a stiff rebuke Monday from Kuchenbecker and Sipes.

"We find this most disturbing and unconscionable that a Law Enforcement Executive would think this way let alone post such a vile message," they wrote.

"We recognize that our country is undeniably divided at this time, but the elections are over, and it is now a time for all of us to heal," they wrote. "We who serve in Law Enforcement must be held to a higher standard. We promise and commit that we will continue to work as hard as we can to earn the trust of our communities and treat all we encounter with respect and dignity at all times and during all contacts."

The award is given to businesses that prioritize the hiring and retention of U.S. veterans.

"From storming the beaches of Normandy to enlisting in the military after the Twin Towers fell, our veterans have honorably served our nation and deserve respect and gratitude," the Little Rock Republican said.

By "hiring, retaining, and supporting military veterans," the companies are "strengthening our community," he said.

The Honoring Investments in Recruiting and Employing American Military Veterans Act of 2017 (HIRE Vets Act), signed into law by President Donald Trump on May 5, 2017, created the federal-level award, which debuted the following year.

The U.S. Department of Labor oversees the program.

Windstream Communications in Little Rock and WPS Labor in Rogers have received the award all three years.

At least one other Natural State company, Little Rock's Mechanical Solutions of Arkansas, had previously won the honor, according to the HIRE Vets website, hirevets.gov.

Planning to visit the nation's capital? Know something happening in Washington, D.C.? Please contact Frank Lockwood at (501) 908-5204 or flockwood@adgnewsroom.com. Want the latest from the Arkansas Democrat-Gazette'sWashington bureau? It's available on Twitter, @LockwoodFrank.