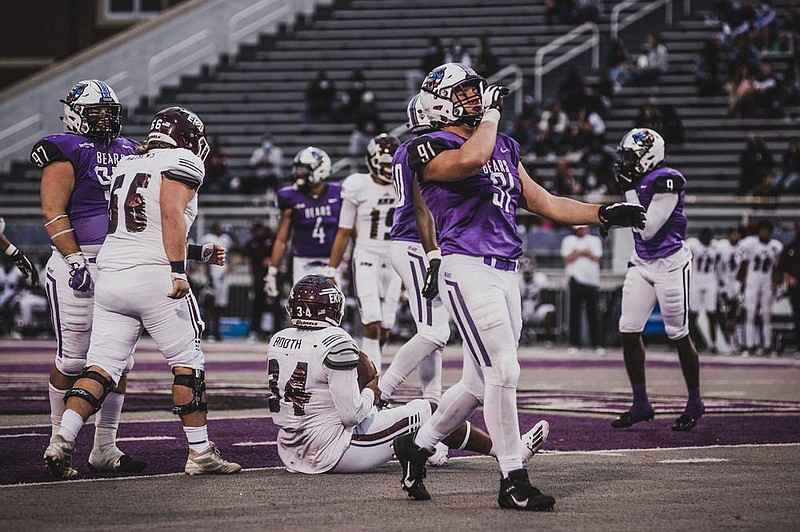 University of Central Arkansas defensive lineman Logan Jessup celebrates after tackling Eastern Kentucky running back Alonzo Booth during Saturday’s game at Estes Stadium in Conway. Jessup finished with 10 tackles and a sack in the Bears’ 37-25 victory over the Colonels to improve to 5-4 this season. (Photo courtesy University of Central Arkansas)

"He said, 'Coach, you've got nothing to worry about,' " Brown said.

Hales, a 6-2 junior from Greenwood, backed up his words Saturday at Estes Stadium, passing for 324 yards and 2 touchdowns in a 37-25 victory over Eastern Kentucky.

He did make his coach and approximately 2,000 fans sweat a little bit, though.

Hales, seeing his first significant playing time since 2018 when he started seven games after Smith broke his ankle, led the Bears to a 24-0 second-quarter lead with pinpoint passing.

He hit short passes and long ones early, including a 69-yard touchdown pass to Tyler Hudson to give UCA a 17-0 lead late in the first quarter.

By the time the fourth quarter started, Eastern Kentucky had taken a 25-24 lead, outgaining UCA 314-96 during the game's middle two quarters.

Hales said it was Brown who lit a fire under the Bears at that point.

"We definitely needed a boost from our coaches," he said. "Coach Brown had to get under our skin a little bit. Which we needed. We needed to get fired up. We needed to get mad. You get stuff done when you're angry."

The turning point came with 2:00 to play in the third quarter, after Eastern Kentucky (2-6) took its first and only lead after a 2-yard touchdown pass from third-string quarterback Isaiah Velez to Keylon Dixon.

The Colonels missed the two-point conversion attempt to keep the score at 25-24, but Bears kick returner Cameron Myers said he knew it was time to get something done.

It was Myers who put UCA (5-4) up 11 seconds into the game when he returned the opening kickoff 96 yards for a touchdown.

Standing at the goal line with his team down by 1, Myers returned a ball he normally would leave alone.

Myers said he found a crease in the Eastern Kentucky coverage, and he broke into the open field before cutting back at the 50 and getting pulled down at the Colonels' 44.

It turned out to be the spark UCA needed to retake the momentum in a game the players had been pointing to for three weeks after a 31-28 loss to the same Eastern Kentucky team in Richmond, Ky.

This time, the Bears were without Smith, their starting quarterback; both of their place-kickers, Hayden Ray and his backup Chandler Caughron; defensive end Austin Norris; and safety Nick Nakwaasah, all five testing positive for covid-19.

"They know it can spread like wildfire," Brown said.

The Bears responded to the adversity.

Not only did Hales step in for Smith, but punter Seren Hughes-Ford took over all the kicking duties, making 4 of 4 extra points and a 30-yard field goal.

All of the emotion from the positive tests and the loss at Eastern Kentucky helped the Bears get off to their flying start.

"Our guys wanted this game bad," Brown said. "We hit a little lull there. Having that fast start was huge."

The Bears then held to Colonels and took over at their 11 with 10:19 remaining. They drove 89 yards in 14 plays, consuming 7:46 of the clock, before Hales hit Lujuan Winningham with a 12-yard touchdown pass to put the game away with 2:33 to play.

"That 90-yard drive to seal the game was probably the biggest drive of the year," Brown said, "when you talk about the circumstances. I was joking on the sidelines before the fourth quarter, 'We can't do anything without drama.' The MO to our program right how is we don't win without drama."

Eastern Kentucky Coach Walt Wells said his team showed grit in its comeback, with Velez leading the way with 151 yards passing and one touchdown.

"I'm proud of them," Wells said. "But you've got to finish the goods."