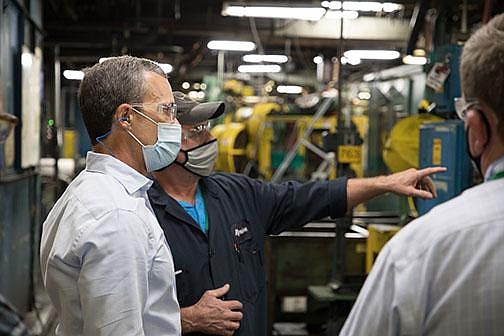 Vista Outdoor, the new owner of the Remington ammunition plant in Lonoke, is recalling workers and getting production at the facility geared up to meet nationwide demand.

During a recent interview held via Webex, Chris Metz, Vista Outdoor chief executive officer, said the company is focused on bringing the Lonoke operation back to its full potential, including linking the facility in with the Vista Outdoor's logistics and implementing its covid-19 safety protocols for the company's workers.

Vista Outdoor was formed in 2015 when the sporting group of Alliant Techsystems Inc. was spun off. The company includes a wide variety of outdoor brands including optics and ammunition makers.

Vista Outdoor booked $1.8 billion in sales in fiscal 2020, with $1.2 billion coming from the shooting sports segment and $600,000 million in outdoor products, according to its annual report. The company employs about 5,400 since the Remington acquisition and has 14 other manufacturing operations in the U.S. and Puerto Rico.

Currently the company employs more than 400 at the Remington plant in Lonoke, with plans to bring back 300 furloughed workers as soon as possible. Metz declined to say what the average pay was at the plant citing competitive concerns but said the jobs paid well and that Vista Outdoor offered a competitive benefits package. He said during the bankruptcy the plant was functioning at about 10% capacity before Vista Outdoor took over.

In July, Remington Outdoor Company, the nation's oldest gun-maker, declared bankruptcy in United States Bankruptcy Court for the Northern District of Alabama, its second bankruptcy in two years, even with ammunition and firearms sales at record highs across the nation.

The private company was founded in 1816. Remington began production at the Lonoke facility in 1969. The operation includes 750,000 square feet of manufacturing space on 1,200 acres.

In mid-October, Minnesota-based Vista Outdoor Inc. closed on its acquisition of Remington's ammunition production facility, along with the Remington brand and trademarks. Vista Outdoor paid $81.4 million for the assets as part of Remington's bankruptcy. Vista Outdoor used about $51 million of cash on hand and around $30 million from its asset-based revolving credit facility to complete the deal, the company said at the time.

Gun and ammunition sales have skyrocketed nationally since March of 2019 on fears spawned by the covid-19 pandemic and civil unrest. At the same time shooters and sportsmen scooped up ammo leaving store shelves bare and online retailers with extensive backlogs.

Checks for firearm purchases in 2019 totaled 28.36 million, up from 26.18 million in 2018 and breaking 2016's record 27.54 million. While the FBI background-check figures don't represent the number of guns sold, they are generally used as indicators of firearms demand.

Demand in 2020 has not slacked off, with each month of the year breaking background check records. Through October of 2020 there have been 32.13 million checks, more than 13% higher than all of 2019 with two more months left to go. The National Shooting Sports Foundation, a industry and trade group, said in August 5 million of those buyers were purchasing their first firearms.

Metz said for years the ammunition segment of Remington had been neglected by the company in favor of its firearms segment. Vista Outdoors in July 2019 sold its only firearms brand to focus on ammunition.

Metz said Remington meshes well with Vista Outdoor's other ammunition brands and will benefit from economies of scale. Vista Outdoor provides ammunition to consumers, law enforcement the military through brands including Federal Premium, Speer and CCI.

New Hampshire-based Sig Sauer centralized its ammunition production at a new plant in Jacksonville in 2017. The plant makes small-arms ammunition for the civilian, law enforcement and military markets worldwide. The company also builds night sights at the plant.

In April 2019, CZUSA, the U.S. arm of a Czech Republic gun manufacturer, selected Little Rock for its North American headquarters and its first U.S.-based production facility. The company said it expects to invest $90 million and employ nearly 600 people within six years. Construction at the plant site at the Port of Little Rock has not yet begun.

Earlier this month, Vista Outdoor reported sales for its second quarter up 29% to $575 million, with profits of $1.34 per share compared to a loss of 21 cents for the same period a year earlier. The quarter was Vista Outdoor's second consecutive profitable quarter.

The company's third quarter estimates, which include Remington, predict sales between $510 million to $530 million with earnings per share in the 55 cent to 65 cent range. Vista Outdoor shares were trading in the $22.50 range on Thursday. They have traded as low as $4.29 and as high as $24.94 over the past year.

A report on firearms and ammunition manufacturing released in October by market research firm IBIS World indicated Vista Outdoor's market share stands at 8.4%. The report notes the company has divested its interest in firearms to concentrate on its ammunition lines which benefit from strong brand recognition and strict quality tolerances. The report predicts going forward Vista will see increased ammunition demand in the civilian market and in 2021 will see its market share increase to 9.4%.

Nick Sachse, director of product development at Remington, has been with the company for 28 years. In a phone interview he said Vista Outdoor's focus on ammunition will allow Remington to compare notes with the other brands in the company's portfolio to produce an even better product while striving to keep all the various brands unique. He said every aspect of Remington will be more robust because of the acquisition.

"We'll be able to share our collective strengths," he said.

He said the Remington plant, once it's fully staffed and integrated into Vista Outdoor's supply chain, will be be producing as much ammunition as possible to fill now empty store shelves with popular offerings that have been absent for too long.

"We're going to be full steam ahead," Sachse said.