Three shrubs and a tree this week

Three of the plants in this week's mystery challenge can be invasive if given a chance. With any plants, it always comes down to the right plant for the right location. Climate, soil type, moisture and location do make a difference as to how much a plant will spread. 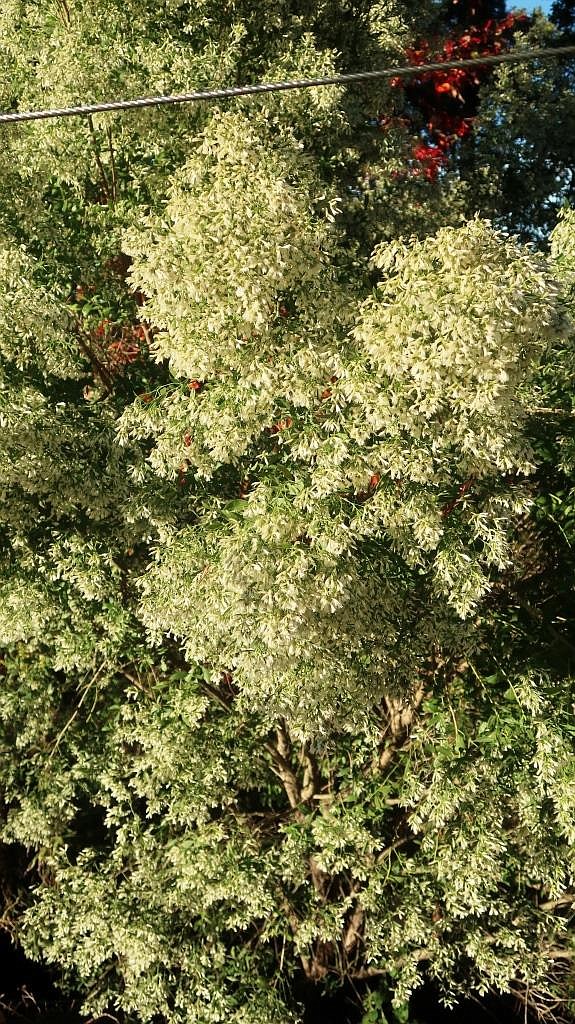 Groundsel bush – Baccharis halmifolia is a native shrub that can be somewhat invasive. It covers the sides of our roadways 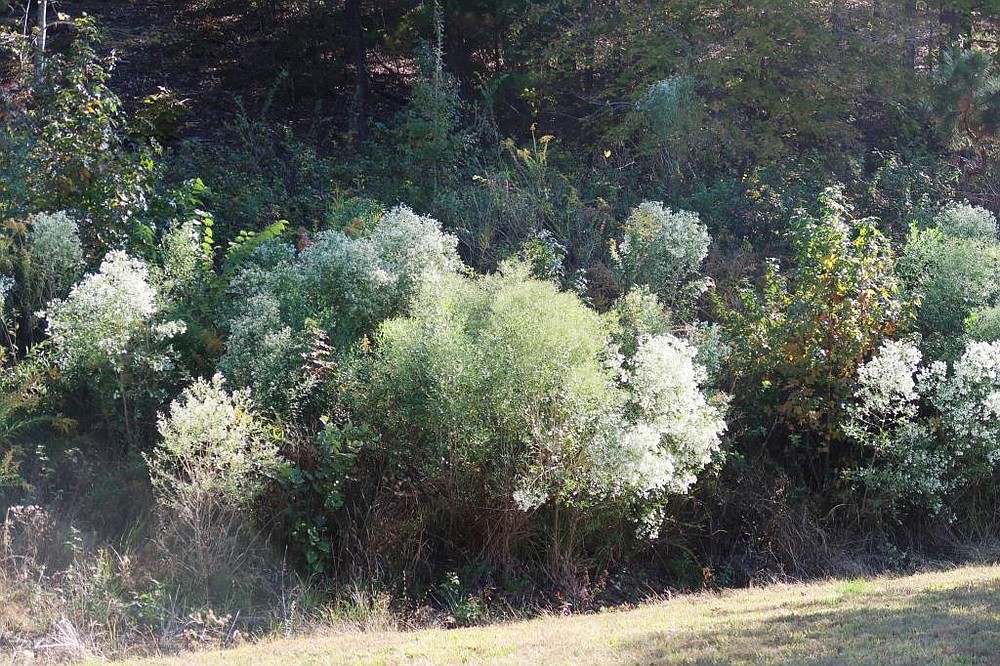 and is showy in the fall of the year. Over the years, I can’t tell you how many samples or pictures have come in to me asking for an identification. Some other common names are Sea Myrtle, Consumption Weed and Saltbush. It is a member of the aster family. Along coastal areas, it is common along salt marshes, thus the common names for sea myrtle and salt bush. There are separate male and female plants. The females are showier. 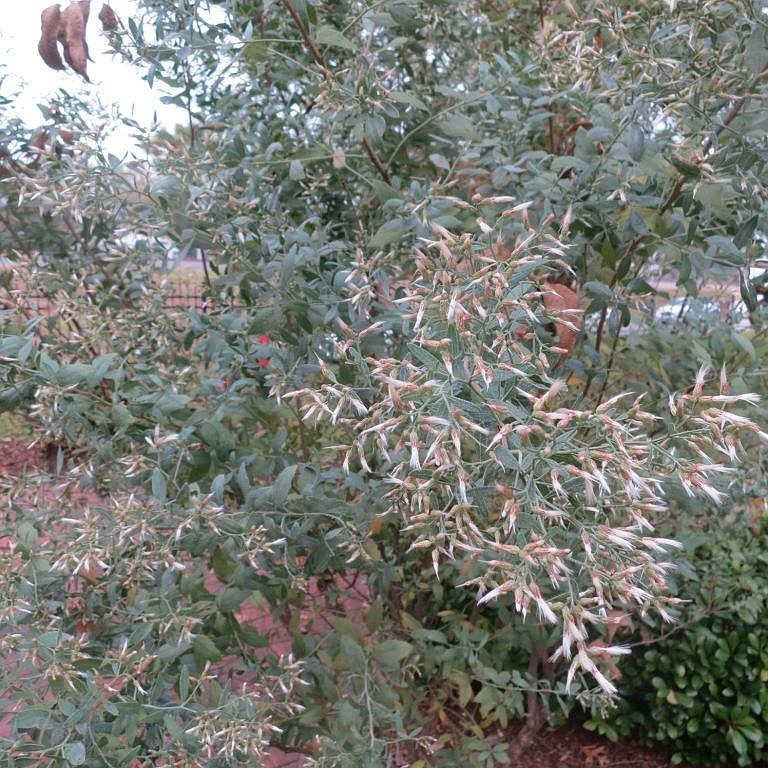 What appears like flowers in the fall are actually fluffy white seed heads. The seeds do scatter, so it self-sows—too prolifically. 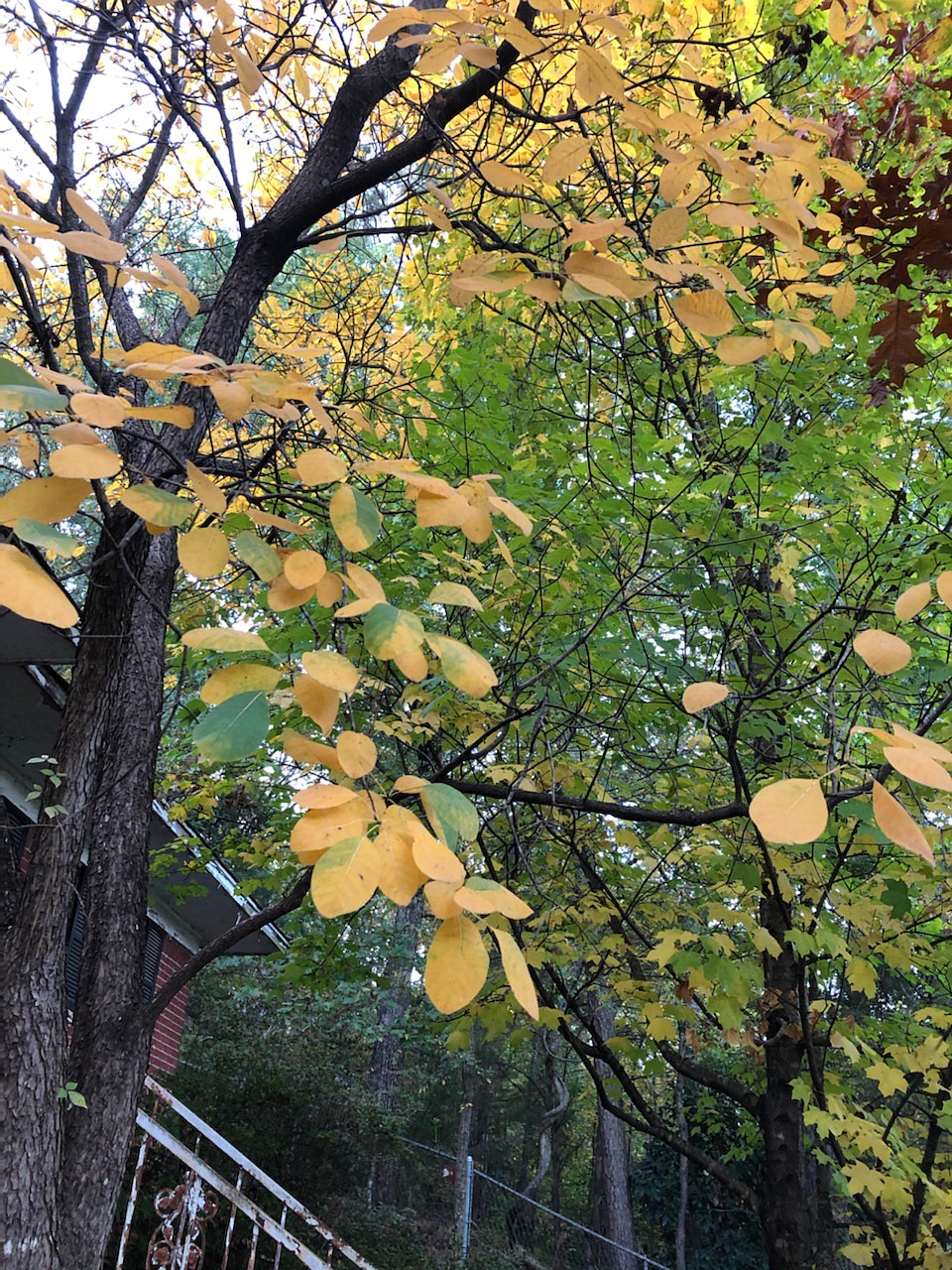 Paul Shell has this small tree in front of his house. When he sent me the picture, I thought it was where his smoketree was, but I had never seen one this yellow in the fall. 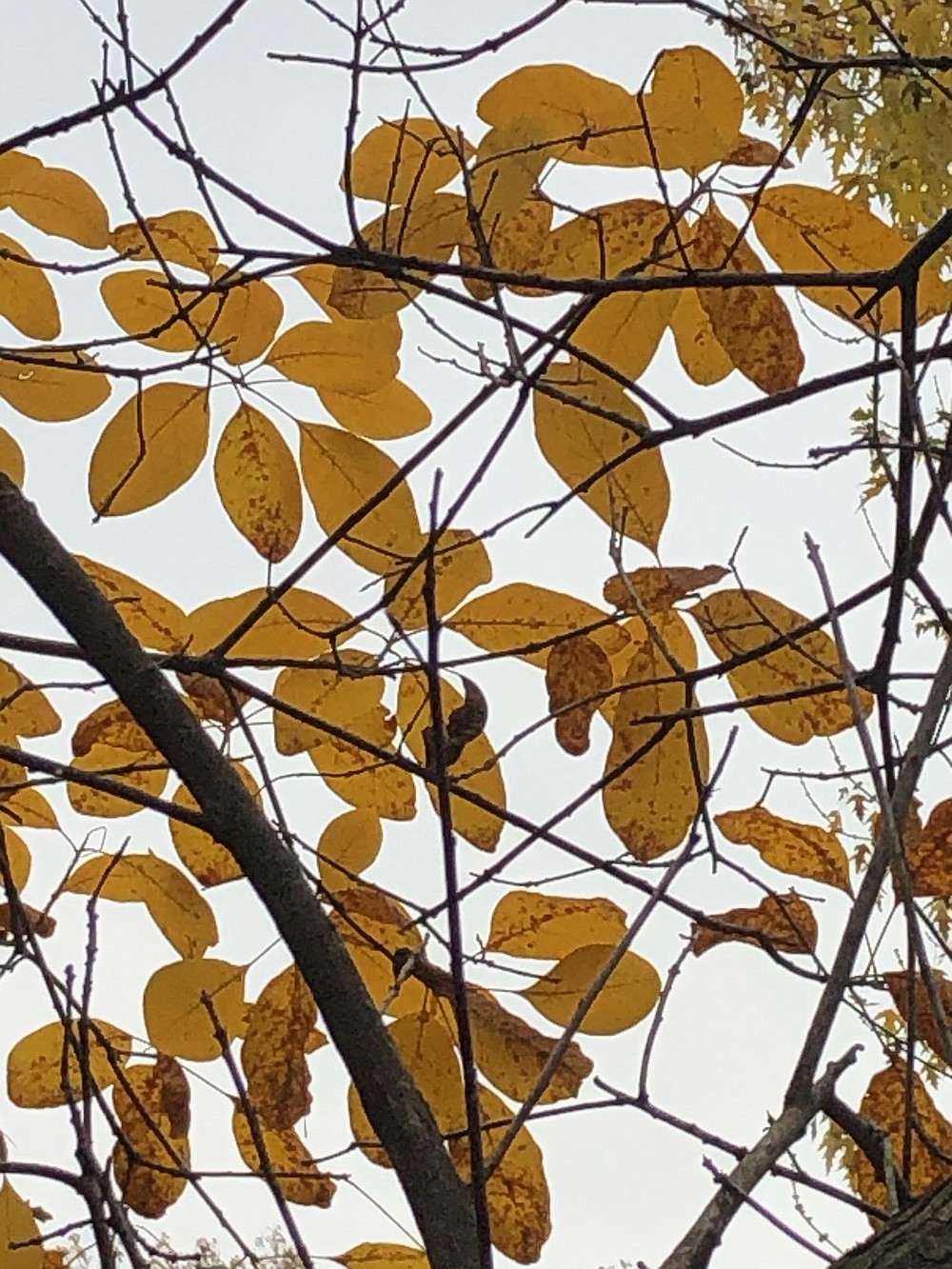 I am more used to a reddish-purple fall color—so keep in mind the fall color can range from red and purple to orange or this yellow. 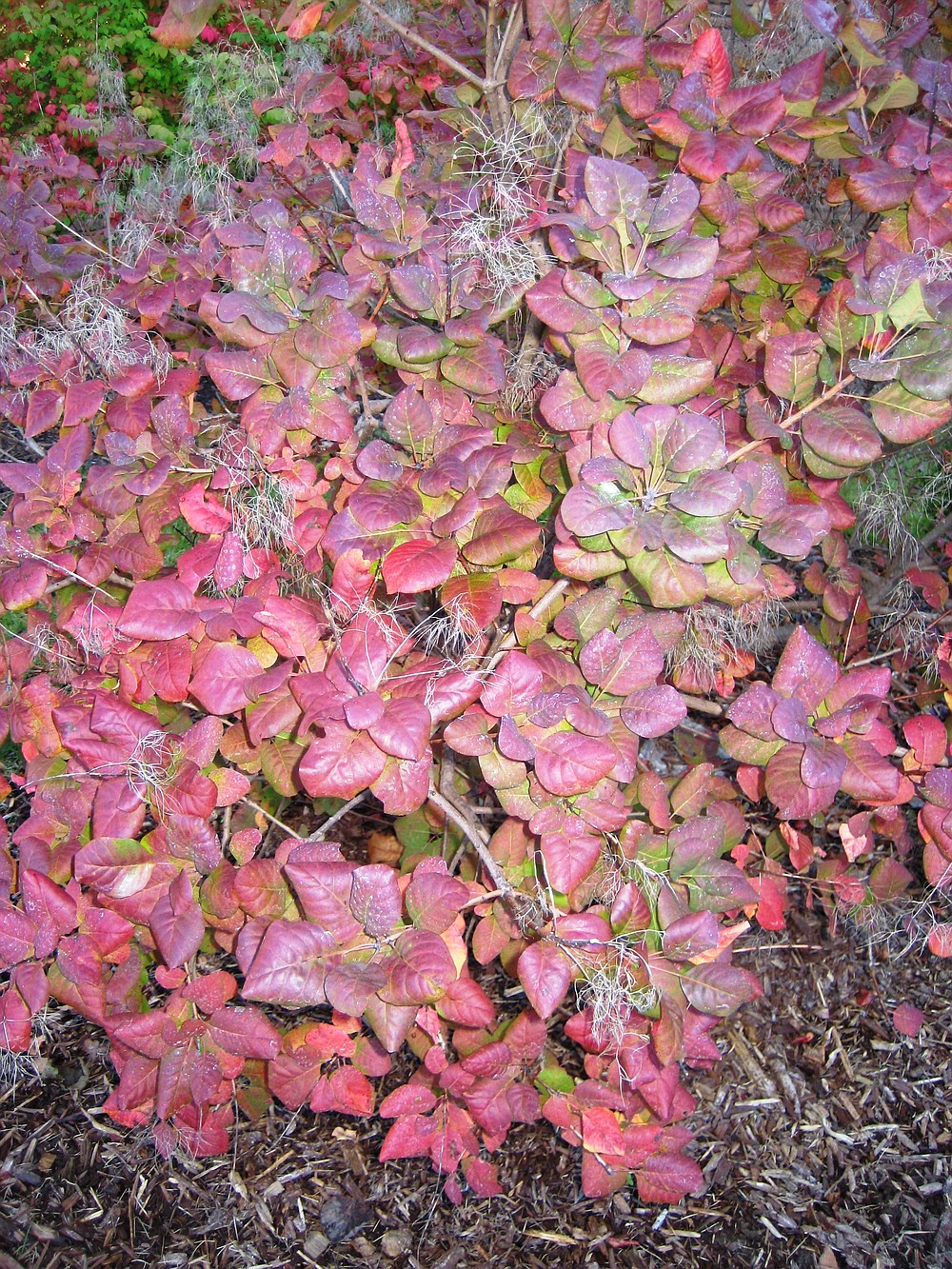 Smoketree gets its name from the hazy “smoke-like” display of the spent flowers in the summer. 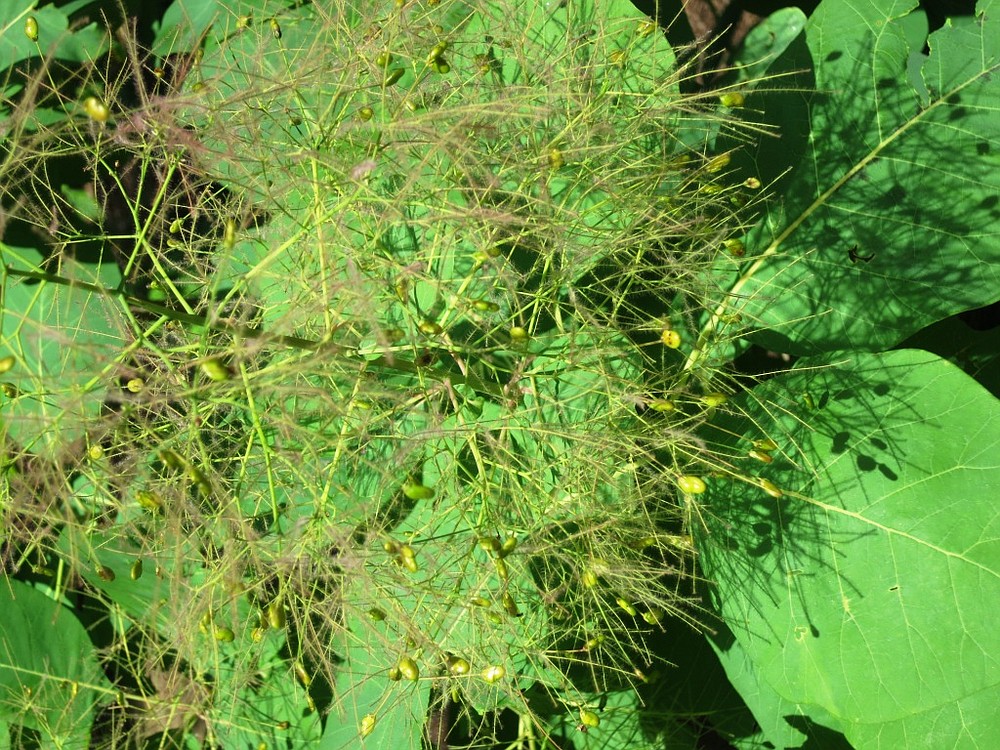 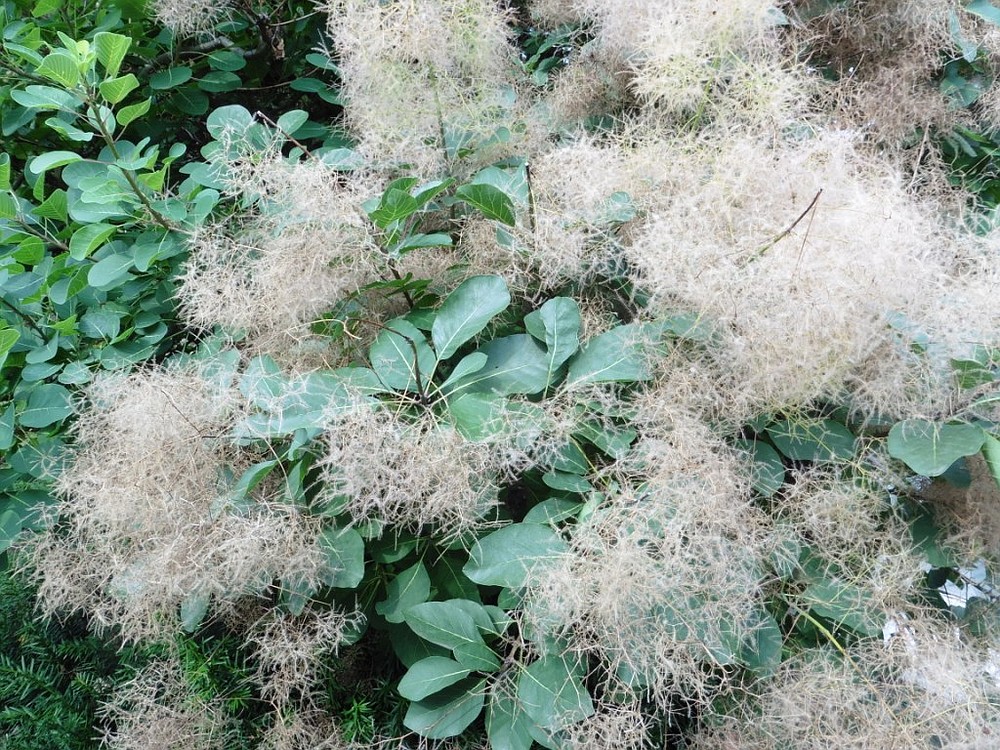 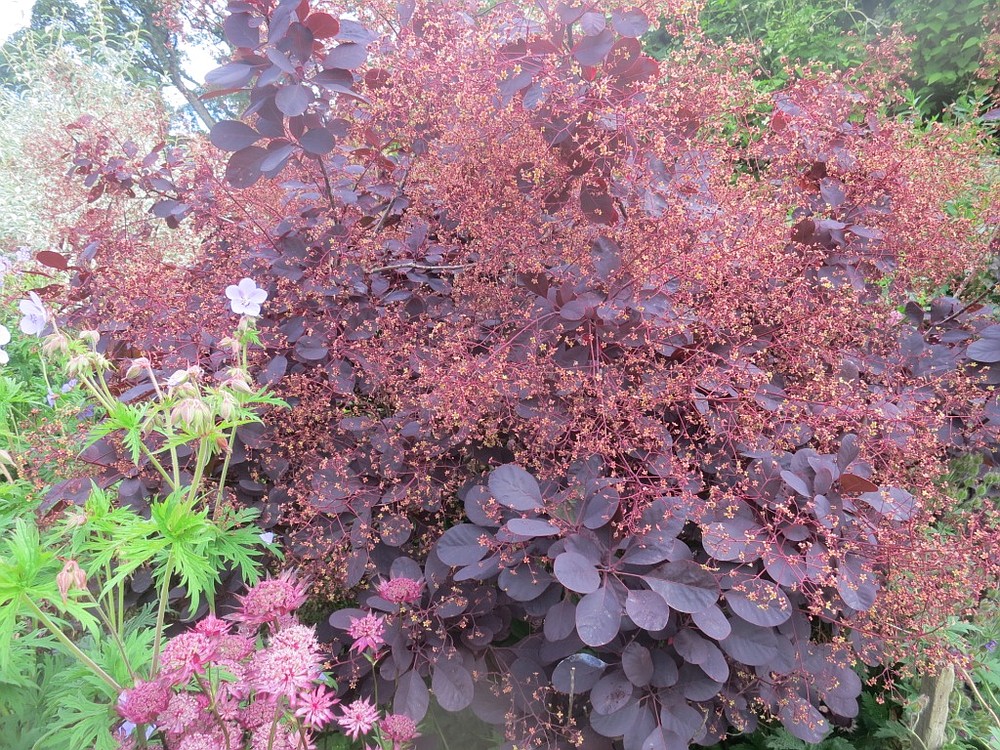 but it is a low maintenance small tree. 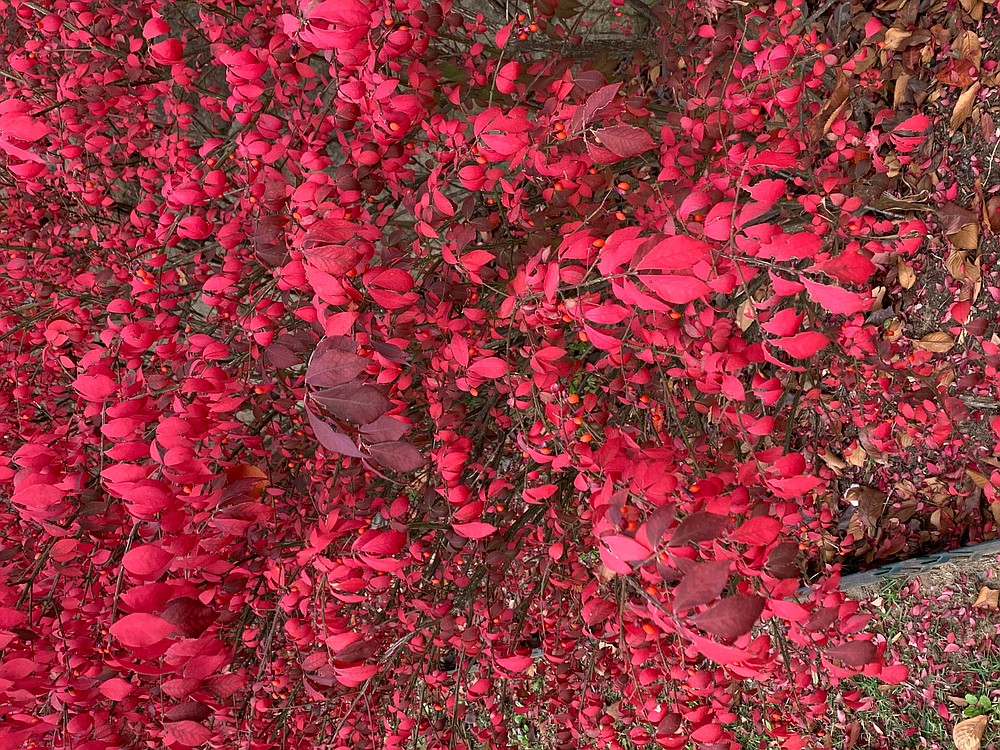 also called winged euonymus is truly on fire this fall. 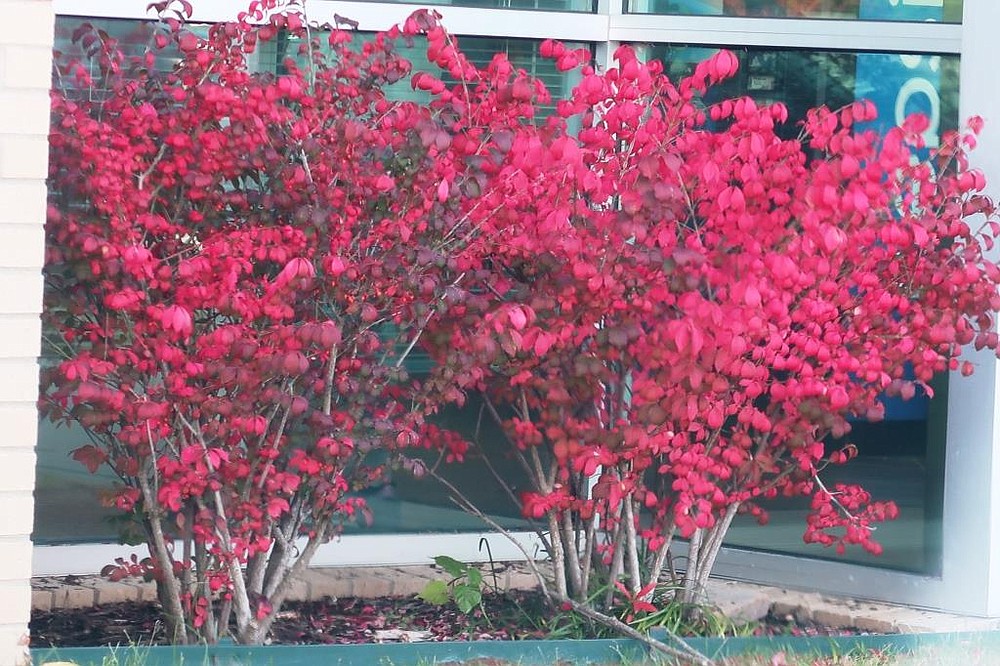 I don’t think I have ever seen this deciduous shrub as showy as it is this fall. As a result, many gardeners are going out to try to add them to their landscapes. Two words of caution, they aren’t always this red in the fall in Arkansas—heat and drought can limit fall color. They are also beginning to spread—in the northern tier of our state more than in the central and southern tier. I think our climate limits their spread more in the central and southern areas, but it has only been recently that they are spreading up in northern Arkansas. If you look at invasive plant sites, they are horrid up in the north eastern part of the US—they often consider them as invasive as our privet. Invasive plants are listed by regions, since climate does affect a plants hardiness and spread. This is a green shrub with an extra corky tissue along the stems--thus the common name winged. 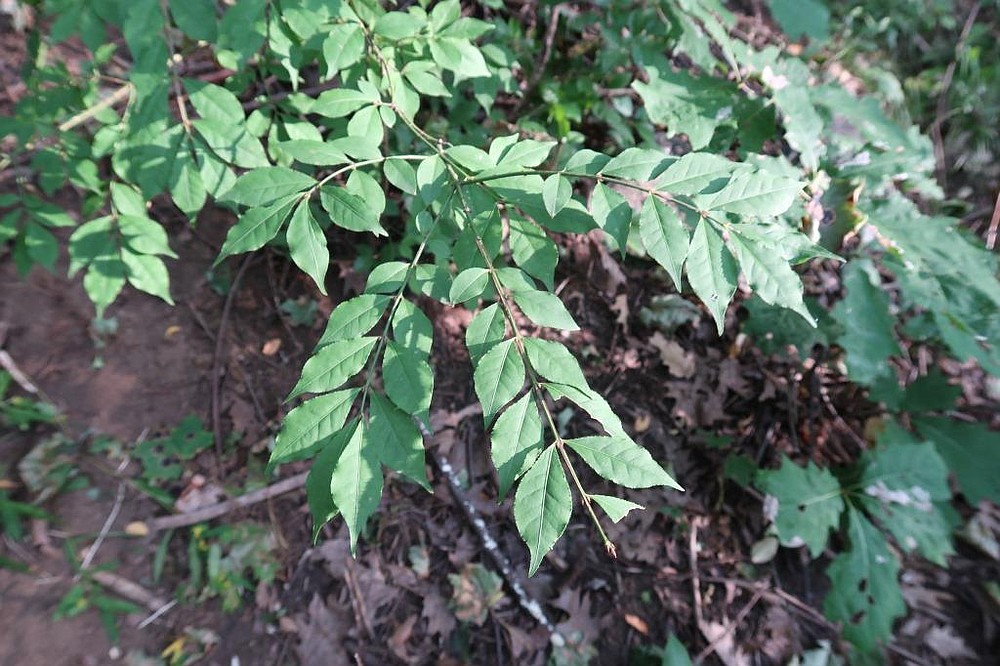 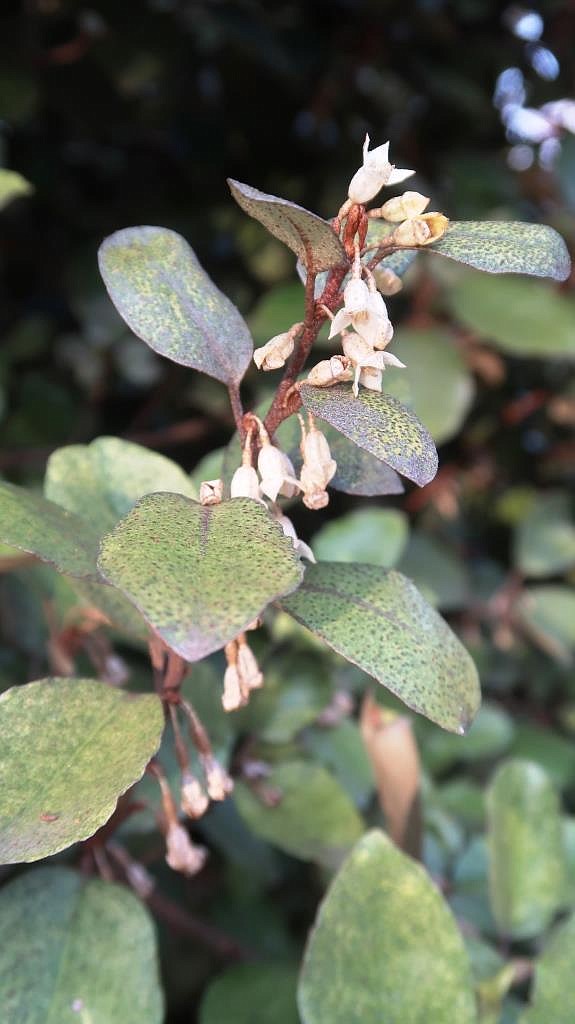 , is an evergreen shrub that will grow well in sun to partial shade. 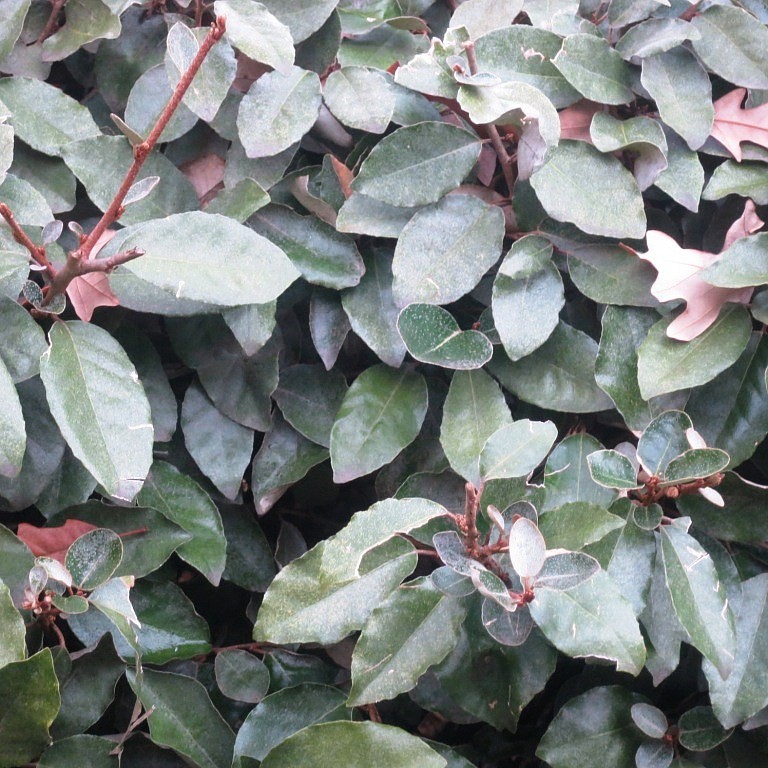 The backs of its leaves are silvery in appearance with small brown specks, on both the leaves and stems. It blooms in the fall of the year with small white inconspicuous flowers, but they smell heavenly. While they can make a great hedge, 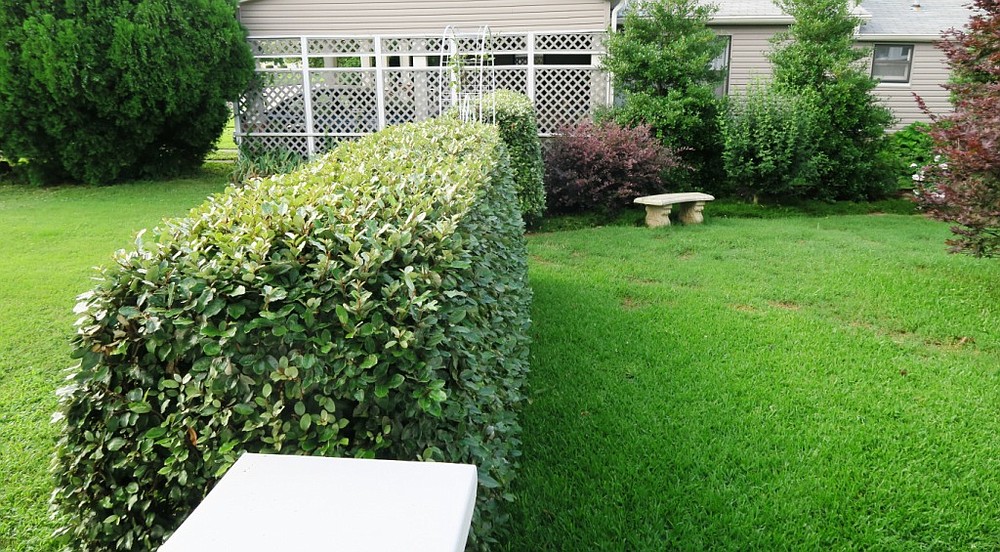 they tend to throw up wild sprouts several times a year—which I call a bad hair day. 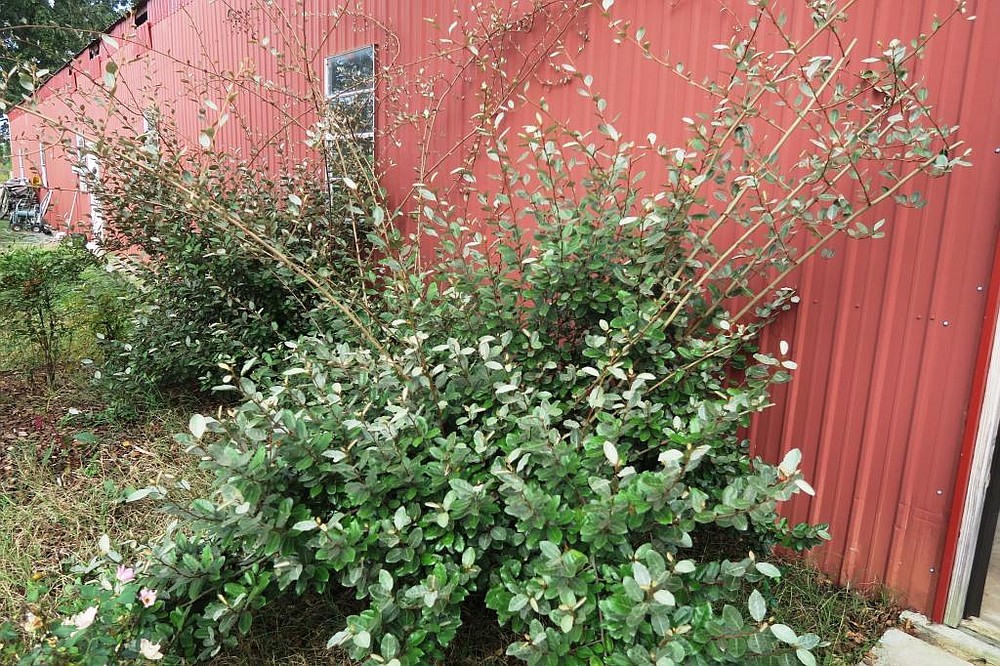 To keep them looking more manageable, they do need trimming. They can spread in the wrong place, and are on the invasive list in other states. It is related to Russian olive, Elaeagnus angustifolia, 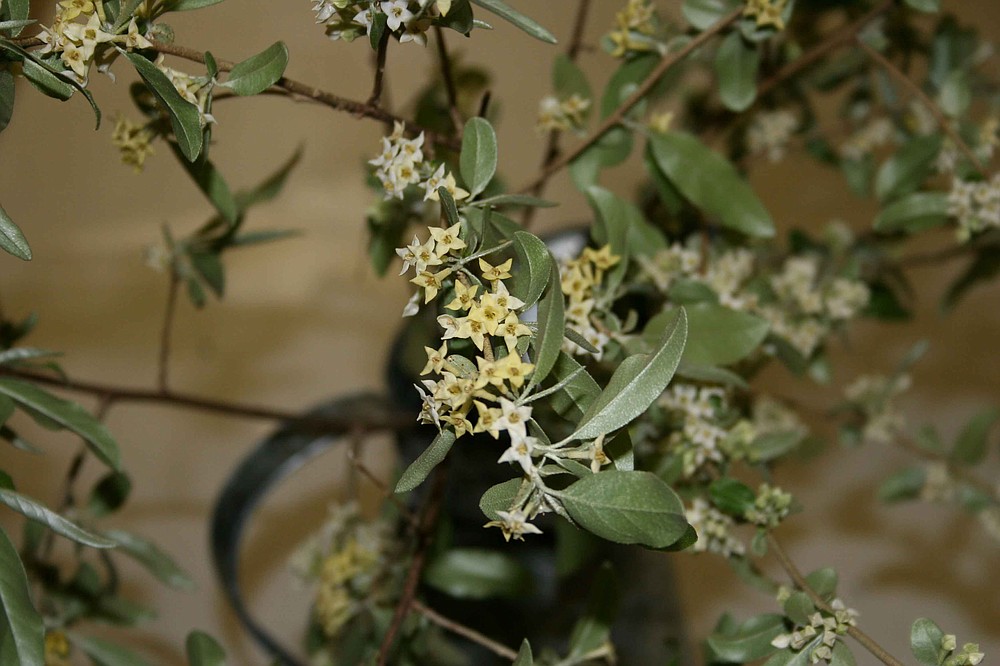 which is much more aggressive in Arkansas, and blooms in the spring of the year.